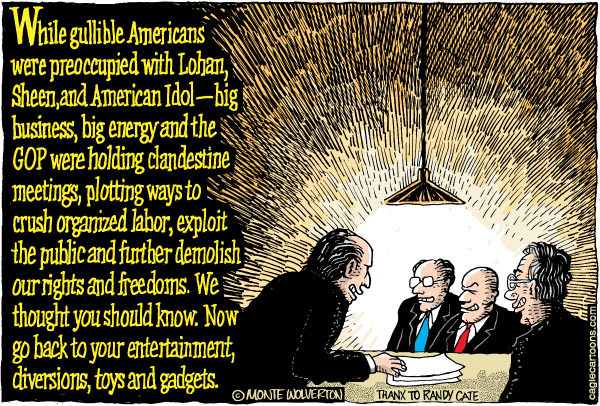 The American Legislative Exchange Council, otherwise known as ALEC, is a politically involved non-profit group funded by some of the largest corporations in our country. ALEC’s diverse corporate donor list includes large petrochemical companies, such as Koch Industries, and pharmaceutical companies, such as Pfizer. The purpose of ALEC is to give the donor corporations direct input into the lawmaking process, through drafting and suggesting laws to be passed by lawmakers. Recent legislative efforts to repeal labor and environmental regulations as well as privatization of public goods have been traced back to ALEC for their origin.

In their mission statement, ALEC states their core values as “Limited Government”, “Free Markets” and “Federalism”. In order to advocate for its values, ALEC has nine task forces that cover virtually every segment of policy in government. The ALEC task forces consist of industry experts, policy analysts and corporate interests and their goal is to write “model legislation” to present to sitting politicians in the legislature.

The main vehicle for ALEC to advocate for its causes is to create laws that are then presented to politicians for them to sponsor in the legislature. These “model legislations” have been presented in both state and federal legislatures, primarily by Republicans, but in some cases by Democrats. While the exact number of laws written by ALEC is unknown, as some politicians will not disclose the source of the bill that they are proposing, ALEC itself claims that over 1000 of its bills were presented in state and federal legislatures last year alone.

ALEC is funded, virtually in its entirety, through donations from large corporations. The donations that are not from corporations are those of the politicians who are a part of ALEC but as they only pay a $100 fee for a two year membership, these donations are negligible. The largest corporate donors, including AT&T, Pfizer, Wal-Wart, UPS, Koch, Exxon Mobil, the Atria Group, and State Farm Insurance among others, are organized into the “corporate board” of ALEC.

While the full list of corporate donors to ALEC is too large to list in this article, you can find a complete list at the following link: http://www.sourcewatch.org/index.php?title=Alec_corporations

Each of the component corporations has donated thousands of dollars, if not tens of thousands, a year in order to support ALEC. In compensation for their donations, these corporations get access to ALEC supported politicians and a say in what the “model legislation” presented by ALEC constitutes.

ALEC acts like a union for large corporations in that it allows its members to get together and negotiate with representatives of the more powerful government.

ALEC is represented by some as a non-partisan policy group with society’s best interests at heart. This characterization is simply false as they are not a non-partisan policy group any more than a defense lawyer is a crusader for social justice; both serve to advocate for their clients no matter the evil they have committed in the past. ALEC exists to serve the corporate interest that created and fund it and representing it as anything else confuses the goals of their legislation.

Recent pro-corporate legislation, particularly on the state level, has often been born in the meetings of ALEC task forces. Anti-labor bills such as the “Paycheck Protection Act” and the “Employee Rights Act” make it more difficult for unions to organize and fund themselves. The “Prison Industries Act”, allows for private prisons to produce goods using prison labor at far below the minimum wage. The “Animal and Ecologic Terrorism Act” expands the definition of the term “ecological terrorist” and increases the penalties under the law for engaging in environmental activism. In the recent hydro-fracking fights around the country, ALEC has drafted resolutions intended to keep fracking authorization on the state level where regulatory authority is far weaker. The shear diversity of the ALEC written legislation is massive and covers virtually every aspect of policy that affects corporations.

As many ALEC corporations benefit hugely from decreased environmental, worker, or social protections, we can see that the corporations donating to ALEC are in fact getting a return on their investment into this non-profit.

Regardless of whether one agrees with the legislation passed by ALEC politicians or not, the fact remains that corporations are being given the ability to literally write the laws that are being used to govern their actions and ours. There is a massive conflict of interests inherent to the very ideal of ALEC, and while their actions are not illegal or immoral, they are corporatist. The government in a democratic country is intended to take care of the common good, not cater to the profit margins of large corporations. As such, laws should be made “for the people, by the people”, not “by the corporations, for the corporations”.