The Threat of Religious Extremism to the United States 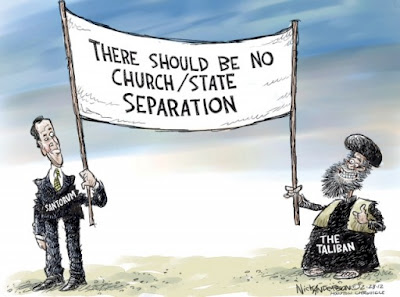 The United States is currently facing a very serious threat: a group of highly motivated and deeply committed religious extremists is currently attempting to take over the government and institute religious laws. These extremists are highly organized, willing to commit violence against those who oppose them, and are infiltrating every segment of our government in an attempt to remake the country’s policy in their own image. The policies which these extremists support include: controlling the lives and bodies of women, inserting religious dogma into public education, suppressing other faiths’ religious practices, writing laws which enforce religious morality over the secular public, and the re-writing of history in order to indoctrinate future generations into believing that these policies are the true values of the country. Based solely upon my description of these religious fanatics, many who read this would likely believe that the religion which these zealots follow is Islam, but they would be incorrect.

The religious extremists whom I speak of are not Muslims, but rather the extremist Christian fundamentalists who have attached themselves to the right wing. Recently, numerous politicians have not only rejected the idea of the “separation of church and state”, but have pushed policies based entirely upon conservative Christian teachings (ex. banning gay marriage based upon biblical passages); such policies are not based in factual evidence and have no place in the United States.

The United States is a purely secular country and any attempt to institute religious laws, regardless of the religion, should be fought be every American. Religious laws are contrary to American values and it makes no difference if the basis for such religious laws is the Bible, Koran, Torah, Manusmrti (Hindi caste text) or any other religious text. All too often, the media fails to frame religious laws as such, and simply lumps these unconstitutional laws into the conservative narrative—this is a terrible mistake and serves to conceal the religious justifications of proposed laws behind a veneer of political ideology.

Christian extremists in the United States have a long history of attempting to legislate sexual morality as well as control women. These extremists believe that their religious text–the Christian Bible—should be the base for determining what Americans are allowed to do in their bedrooms, who they should be allowed to love, and what level of control women should have over their bodies. Often, these religious fundamentalists conceal their religious laws by using moral arguments, but, given a little digging, it is usually easy to see the religious justifications behind these laws.

The infiltration of the government by religious fundamentalist is by no means a new phenomenon, but it has become worse in the past decade. The rise in power of the conservative movement has allowed the Christian conservative movement to gain a great deal of influence within modern American politics. Fringe Christian extremists—such as Santorum, Perry, or Bachmann—are seen as legitimate political candidates today, when they would have been laughed off of the stage even during the 2000 presidential election.

Abortion rights and affordable birth control are issues which are vital to the health and personal power of women in the United States. When women have control over their bodies and reproductive choices, they are able to participate in society on equal footing with men. Unfortunately, Christian extremists believe that their religion mandates the subjugation of women, thus are vitriolically anti-reproductive freedom; while they are not as blatantly restrictive of women as Muslim extremists in the Middle East, American Christian fundamentalist have demonstrated a persistent desire to control the choices of women. There is no rational explanation for the banning of birth control and any attempt to do so should be seen as what it is—the enforcing of religious dogma over society and an attack on women’s rights.

Many Christian extremists claim that their anti-abortion fervor comes from a desire to protect life, but this position is debunked by several inconsistencies. Christian fundamentalists are against birth control, sexual education, and spending on early-life care, thus it is obvious that they care little about reducing the number of abortions or protecting children; in essence, they only care about preventing women from controlling their bodies and are using the goal of “protecting children” as an excuse. In addition to their hypocrisy surrounding children’s welfare and abortion rights, many Christian fundamentalists support violence to end abortion rights. No rational human being can simultaneously claim to be pro-life, yet shoot or blow up abortion doctors for performing abortions for the women who want them.

It is possible for an individual to be anti-abortion on moral grounds, but not if their only arguments against abortion are the fact that their religious texts have been interpreted to say that abortion is a “sin”. Abortion may be a sin (sins are human constructs created to label religious taboos) but, as we aren’t a theocracy, there is no reason why the government should criminalize religious “sins”.

Preventing gay marriage from being legalized and blocking the granting of equal rights to same sex couples are two of the most common policies which modern Christian fundamentalists attempt to push on society as a whole. The justifications for attacking the rights of same-sex couples are nothing more than religious arguments and Christian extremists rarely attempt to conceal it. This blatant overreach of one religion into secular policy is rarely pointed out by the media, and only highlights how complacent the public has become about protecting the separation of church and state. The next time you hear a Christian fundamentalist politician promote an anti-gay agenda using religious justifications (I.E. Watch TV for 5 minutes), imagine that the politician is a Muslim, rather than a Christian, and is citing the Koran, rather than the bible; even though the situations are identical, in that they involve one religion attempting to legislate their religion, the outcry against Christian fundamentalist law is non-existent when compared to if they were Muslims. Religious laws are religious laws, regardless of the religion, and we must never allow any religious faith to control public policy.

Ultimately, it is up to the American people and the media to fight back against religious law and ensure that the only laws which are govern us are based entirely upon secular logic. The media must research the justifications behind laws and ensure that they are based in fact and the public good, rather than the writings of long dead religious figures. Once the media or, in the case of media failures, informed individuals, identify laws based upon religious arguments, the public must ensure that politicians are held accountable. Voters must vote out any politician who supports religious laws, regardless of party affiliation or whether their personal faith is being supported. The United States is not a theocracy and any attempt to insert religion into public policy is inherently un-American; we have seen the result of mixing church and state in countries like Saudi Arabia, and most of us don’t like what we see.