On October 5th, the September 2012 jobs report—formally referred to as the “Employment Situation Survey”—was released. The September report indicates that September was a good month for those who have been searching for work and that the unemployment rate of the United States has fallen below 8% for the first time since January 2009.

The Employment Situation Survey is an economic survey program run by the Department of Labor, intended to act as a barometer for the employment situation in the United States. In order to measure employment numbers and wages, the Labor Department surveys a large sample of both employers and American households on the subject of their employment situation. Employers are surveyed on how many people they hired, while households are surveyed on how many of their members found jobs in any month as well as how many of their members are currently employed. As a public survey, the results of the monthly jobs numbers are available at the Bureau of Labor Statistics website:

in September alone, approximately 500,000 of those surveyed in the jobs report wish that they could increase their hours or move from part-time to full-time

During the month of September, businesses across the country reported an increase in their payrolls of approximately 114,000 workers. To add upon the numbers reported by businesses, the household survey portion of the jobs report indicates that 873,000 Americans have found jobs in the past month; this number is larger than the business-payroll numbers because it includes part-time employment. With the new jobs numbers being taken into account, the unemployment rate of the United States has fallen from 8.1% to 7.8%

Not only did the rate of employment increase, but this increase was not a function of individuals leaving the jobs market due to job unavailability. According the to the jobs report, the labor force grew by approximately 418,000 workers (which is more than the working-age population growth). The relative increase in the percentage of the population which is working when related to the percentage of the population which is working-age, indicates that the unemployment rate decrease is due to jobs being created, rather than people stopping their jobs searches.

The September jobs report not only indicates that many people have found employment, but also that wages are slowly increasing. As quoted from the report: “In September, average hourly earnings for all employees on private nonfarm payrolls rose by 7 cents to $23.58. Over the past 12 months, average hourly earnings have risen by 1.8 percent.”. While a 7 cents isn’t a significant increase, it does indicate that the new September jobs are not solely found in the lowest-wage industries (ex. food service) and that wages have been relatively stable.

Despite the good news contained in the September jobs report, there are a few aspects of the job report that aren’t as bright. First and foremost  is the fact that part-time employment has dramatically increased during the recovery—in September alone, approximately 500,000 of those surveyed in the jobs report wish that they could increase their hours or move from part-time to full-time. Part-time jobs rarely pay a living wage, particularly in lower-skilled occupations, and often don’t come with benefits. If many Americans are being forced to take part time jobs in order to remain afloat, they are classified as “employed”, but they likely lack the level of employment which would allow them to sustain themselves and their families. For a full economic recovery, it isn’t just necessary for people to be employed, but also that they are in jobs that provide them survivable wages, hours, and benefits. 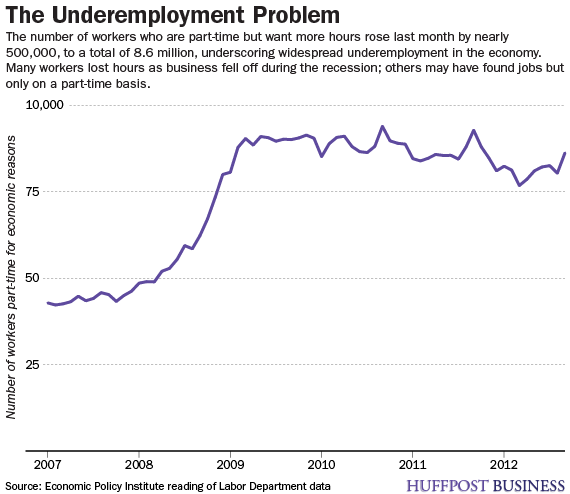 The second problem illustrated by the jobs report is in the area of which industries the jobs are being gained in. While jobs are being gained in some fields (ex. teachers), the unemployment rates in the fields of construction and manufacturing are still virtually unchanged. We see this disparity in the fact that despite the overall good job news of the September jobs report, the United States still lost approximately 16,000 manufacturing and factory jobs during September. As construction and manufacturing are vital components of the jobs base of the country, particularly to the lower-middle class, this disparity has the potential to isolate these people and remove them from the middle-class. Unless the United States finds a way to prevent manufacturing jobs from continuing to hemorrhage oversees and be eliminated through automation, it is likely that those who have lost their jobs at factories will continue to have a hard time trying to get new jobs.

Democrats have trumpeted the good jobs numbers as indicative of the successes of Democratic policies and have used the report to support President Obama’s re-election campaign. In his speech at George Mason University, Obama said that “We’re moving forward. This morning we found out that the unemployment rate has fallen to its lowest level since I took office”. While it is undeniable that the jobs situation has been improving under Obama, it is inconclusive as to whether Obama’s policies have done the most that is possible to speed the recovery.

It is also important to note that many of Obama’s jobs policies have been blocked by the divided legislature—thus these jobs numbers are not actually indicative of the success of the full Obama jobs agenda. So the Democratic claim that their policies are causing this growth may be true, but ultimately without any context (other policies may have increased the job growth further).

Many Republicans have rejected the validity of the jobs report and have made the claim that the Obama administration rigged the report in an attempt to sway the election. This claim is simply false and most economists experts agree that the Bureau of Labor Statistic’s jobs report is both non-partisan and virtually impossible to rig. Despite the unlikelihood of any fraud in these numbers, Rep. Daryl Issa (R-CA) has signaled that he will be investigating the numbers to determine if there was any interference by the executive branch with the Bureau of Labor Statistics.

Ultimately, the September jobs report bodes well for the recovery of the American jobs market as well as the economic recovery. As more people get jobs, their buying power increases and their demand for goods goes up. The increase in demand from the people who get jobs spurs employers to hire more people in order to meet the newly increased demand. Gradually, this cycle drives an economic recovery and eventually stabilizes at a “healthy” unemployment rate (between 4% and 6% for the USA). The United States job market still has a long way to go in order to be healthy, but the September jobs report is a solid step in the right direction.