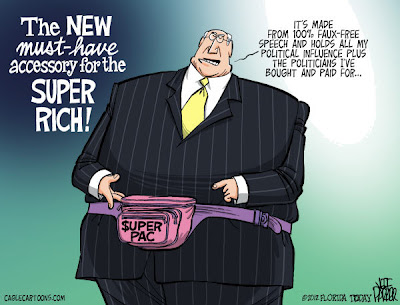 American politics today have become so extreme and bought by corporate interests that we should be near-universally protesting the decay of our political system. Unfortunately, corrupt practices in our government have become so common and widespread as to be the new political norm, thus people fail to see just how severe the problem is.

Politicians in both major parties–on all levels of government–have become so indebted to special interests that the will of the people is no longer the deciding factor on how the government is run. The corruption of our politics is so deep that there is no way to turn, only a choice of the “lesser evil”. Because everybody in politics is bought by somebody, the general public has assumed that this corruption is “politics as usual”, and has not recognized just how bad things have gotten.

I see this situation as the political analog to the proverb that “if you put a frog in boiling water, it will jump out, but if you slowly boil the water around the frog, it will stay in the pot until it is dead.” This is an unfortunate saying, particularly considering that we–the American people–are the frogs who have failed to save ourselves. We must recognize that the water (government) is boiling around us, and unless we take pro-active action in order to save ourselves, we will be in for a great deal of pain.

Recent studies have shown that the top deciding factor on whether a policy is adopted by mainstream politicians is not the opinions of the American people as a whole, but rather the polling of the top wealthiest 10% of the population – Americans in the next 40% of the population (90%-50%) still have a say, albeit a lesser one, yet those in the bottom 50% have virtually no input into the political debate. It isn’t that 90% of Americans are unable to vote, just that they will be voting for people who inevitably serve the interests of those in the top 10% (because these are the people who have enough money to swing an election through donations). This phenomenon should be the subject of universal outrage by all who care about a fair and responsive government, yet only relatively small portions of our population have begun to protest.

Several groups, including the right wing “Tea Partiers” and the center-left “Occupiers,”have recognized a problem in our political system, yet are unable to combat the problem of corruption on a large scale. The Tea Party fails to address corruption because it was hopelessly co-opted by the very interests that they hoped to fight. In addition to this co-option of the Tea Party, they have been ineffective in due to the facts that they alienate many people with their “socially conservative” views and tend to support candidates who make fools of themselves (ex. Michelle Bachmann). The Occupy movement has been ineffective in achieving change because, while it has noble ideals and is virtually impossible to co-opt (due to decentralization), it lacks any real funding to combat the massive swell of money on the other side (a serious handicap in a system run by money).

Despite the wide variations between the ideologies of the Tea Partiers and Occupiers, they both identify corruption in government as a gigantic problem in our country today and have mobilized to combat it in the best way they can think of. Unfortunately, even when the memberships of these two groups are combined, they account for less than 10% (optimistically) of the general population, thus the vast majority of Americans remain demobilized in the face of blatant corruption.

Legalized bribery, crony capitalism, and the political revolving door are not the political norm; they are a complete perversion of our political system. We, as a country, must recognize just how serious our plight is and protest until real change is achieved. The first, and arguably the most important, step to achieve real political reform is to get money out of politics.