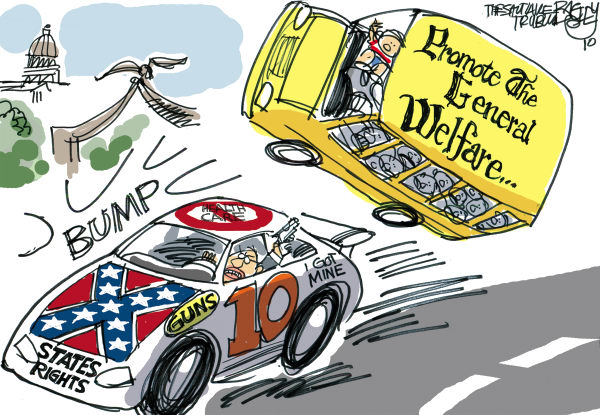 Modern American conservatism is based around an anarcho-capitalist economic policy (or, in some cases, a crony-capitalist policy) and a fundamentalist Christian social policy—somehow figuring out a way to create a party which integrates the ideologies of Ayn Rand and Pat Robertson. In order to facilitate the inception of both segments of their political ideology, conservatives have used the argument that “states’ rights” should reign supreme.

The ideal of “states’ rights” often, if not always, boils down to the ideology that power should be centralized in the states and that the federal government should not interfere with laws passed by the states. By concentrating power at the state level, proponents of “states’ rights” believe that policy can be more accurately tailored towards the needs of the citizens; theoretically, local politicians would be more in tune with and accountable to their constituents than federal politicians. Unfortunately, the reality of power concentrated in the state level is that it is far easier for corporations to buy politicians and for politicians to oppress social minorities.

For economic policy, the modern right wing believes in massive deregulation and reduction of taxes, creating a situation where government is little more than a vehicle for national defense. The ideal of a virtually non-interventionist federal government on economic issues is based around the argument that government should give the economy over to the market and should let capitalism decide economic results. Those who support this ideology claim that the free market—powered by voluntary interactions—is able to provide for all of the needs of society better than any government programs. This ideology supports a fundamentally minimalist government and is incompatible with strong federal or state governments.

While there are certainly many conservatives who honestly believe that their ideology would be beneficial to society, past experiments in deregulation and “small government” have often resulted in corruption and pain for the population. In reality, a lack of a strong government allows those with power or money to set up a psudo-feudalist system (with those who have large amounts of money becoming the new feudal lords) and for bigots to impose their bigotry on others. We see examples of this throughout history, including in the early years of our country—before the implementation of workers’ rights legislation and civil protections, we had the terrible exploitation of the robber-barons.

It makes sense for corporate interests and corporatism politicians to support “states’ rights” rather than federalism because, put plainly, it is far easier for corporations and wealthy interests to buy state governments than it is for them to buy a big federal government. It requires far less money in order to buy state elected officials than federal officials, and efforts can be micro-targeted to specific locales (coal companies just buying the Virginia state government rather than a significant portion of the federal government). In areas where corporations buy the government, they manipulate the politicians in order to remove regulations and lower taxes (Ex. Texas). The alignment between conservative and corporate economic views means that the most effective way for conservatives to bring about their economic ideal is to simply concentrate power in the states (by weakening the federal government) until corporate interests bring about change for them.

In terms of social policy, the American right wing supports allowing right wing Christianity to infiltrate the government and decide upon social policy. There are certainly outliers, but the mainstream conservative movement has essentially jettisoned most politicians who refuse to conform to the extreme right wing Christian orthodoxy—this orthodoxy includes the rejection of science, the “war on women”, attacks on the separation of church and state, and the persecution of gays. In juxtaposition with the conservative economic agenda, the right wing social ideology requires a relatively powerful government, which is capable of regulating compliance with right wing social policy.

We see the state-level creep of Christian conservative policies in the policy area of abortion and women’s rights. Christian conservatives pass draconian, state-level, anti-abortion legislation in states with heavily Christian populations (ex. Mississippi). The passage of this legislation not only imposes right wing social policy on large areas of the United States, but it has provided a fundraising and activist base for future campaigns targeting blue states.

Without a strong federal government to restrict the discriminatory social policy of the conservative movement, many states would gradually descent into a type of theocracy—vast portions of the south and southwest (bible-belt states) would be overtaken with social policy based upon “Christian values”.

The conservative movement has recognized the moderating influence of the federal government on state level social policy and has attempted to restrict the powers of the federal government through the courts and by creating gridlock on the federal level. A perfect example of this obstructive tactic was demonstrated during the 2011 debt ceiling negotiations, where the House of Representatives held up all debt talks unless the Democrats agreed to discuss new abortion restrictions.

While the two major ideological positions of conservatives are fundamentally incongruous—small government economic policy and big government social policy—both benefit from the promotion of the same “states’ rights”. With the weakening of the federal government and the strengthening of the state governments, it is possible for right wing agenda to take control of entire states (Ex. Mississippi). Religious and civil rights issues rarely affect business, so as long as the state governments which are bought by the corporations only regulate social issues, they are unlikely to face corporate pushbacks. By increasing the power of the state to regulate social issues, while decreasing its power to regulate economic issues, the conservative movement is able to take control over wide swathes of the USA and implement both segments of their policy agenda without internal conflict.

Liberals and progressives must recognize the true intents of the conservative “states’ rights” strategy and respond. Progressives must keep federal regulatory agencies and civil rights protections as strong as possible on the federal level, so as to prevent conservative states from repealing the basic protections in our society’s at-risk groups (ex. racial minorities and women).

On a purely economic level—due to the fact that the conservative movement is supported by corporate interests (and their money)—conservatives have an advantage over the progressive movement in many states. While liberal states, such as Vermont or Massachusetts, are unlikely to enact conservative economic policies, the regulatory race to the bottom will eventually drain business way from these states towards those which are more “business friendly” (similar to why we outsource to China). By strengthening the federal government, it is possible for progressives to create a floor level of regulation, under which no state can deregulate past; this floor will mitigate the effects of very conservative states’ attempts to race to the bottom and will buy tume for progressives to fight back.

In terms of social issues, progressives must not only pass state-level protections on minorities, but also work to retain strong federal guarantees for civil right and restrictions on overtly religious legislation. A majority of voters in some states may support repealing civil rights legislation and replacing them with biblical laws, but the majority of the country clearly does not (ex. over 30% of Mississippians polled said that interracial marriage should be banned). By keeping a high standard for progressive social issues legislation (Ex. protecting abortion and voting rights) and utilizing the supremacy clause of the constitution, it is possible for progressive activists to affect policy in otherwise unreachable states.