In the last several decades, the American labor market has been drastically altered by increases in corporate outsourcing—manufacturing and production jobs which once acted as the backbone of the middle class have been shipped overseas. Outsourcing is a serious problem for the employment prospects of the American worker, and action is required to prevent the USA from continuing to hemorrhage jobs overseas. 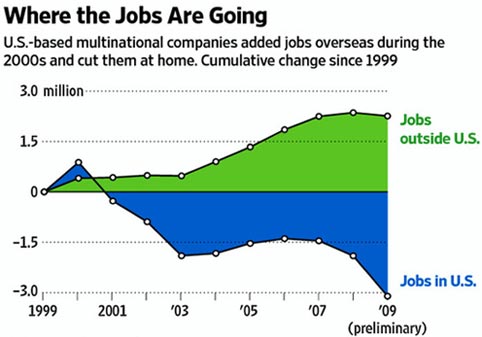 I propose a very simple disincentive to outsourcing: Extend the federal minimum wage to every worker who works for an “American” corporation, regardless of where they are employed. If a corporation wants to be considered “American” and enjoy the benefits that come with that label, they should be required to pay the American minimum wage to everybody who works for them.

In the United States, the federal minimum wage is $7.25 an hour, which translates to approximately $1160 per month (assuming 40 hour days on all weekdays). In addition to the wages offered to employees, businesses are mandated to contribute money to workers’ Social Security and provide basic healthcare packages. Federal labor laws and workers unions (where applicable) prevent corporations from forcing workers to work excessive hours or in dangerous conditions. While many workers rights groups say that American labor laws are antiquated and need to be improved, it remains true that they are more stringent than those of many other countries.

China has no centralized minimum wage, and leaves its provinces to decide upon their minimum wages. The province with the highest minimum wage is the Shenzhan province, which has a minimum monthly wage of 1,500 yuan (In USD, this translates to $240.55 a month for full time workers). The Jiangxi province is the province with the lowest minimum wage, weighing in at a terrible monthly wage of 870 yuan (USD equivalent of $139.52).  In addition to the low wages, China has no requirements that employers provide benefits to their workers, and there are few labor laws that protect workers from abuses.

The wide disparity in labor costs between China and the United States illustrates just why it can be extremely profitable for a corporation to outsource labor. Rather than pay Americans to produce goods, many corporations find it more profitable to produce goods in countries where labor is cheap and then transport the goods back to the USA for sale—the increased profitability that comes with outsourcing labor more than makes up for the increased transportation costs that stem from getting outsourced products back to the states. While outsourcing is not viable for some goods (ex. goods which require specialized skills to produce), it has been prevalent in the low-skilled labor sectors of textiles, customer service, and industrial fabrication.

In order to reduce the incentives for corporations to outsource, I propose extending the American federal minimum wage (currently $7.25/hr) to every worker of a corporation incorporated within the United States. If a corporation wishes to be considered an “American business”, they would be required to pay all of their workers the American federal minimum wage, regardless of where on earth the workers are producing the goods.

In order to pass this initiative, federal legislation would need to be passed to change the requirements for a business to be incorporated in the USA. Such a change would be very difficult politically and would require a significant transitional period (to allow corporations to restructure and account for new labor costs), but it is possible. At its basic level, this law would parallel the Corrupt Foreign Practices Act—a law which prevents American Corporations from engaging in bribery while doing business in foreign countries—in that it would require American businesses to follow certain American business laws while functioning abroad.

By requiring that all corporations which are incorporated within the United States to pay their workers $7.25 an hour (or the foreign currency equivalent), this initiative would severely dampen the incentive to outsource; while these corporations would still be able to utilize the lesser worker protection regulations and safety standards of the country which they outsource to, they would still need to pay their foreign workers higher wages if they wished to be incorporated within the USA. If this requirement were to be enacted, corporations would be forced to choose between three options:

Regardless of which of these three options that the corporation chooses, the result benefits the American worker. If the corporation picks the first option and chooses to stay in the USA (or move back to the USA), this law has acted as a buffer against outsourcing and was a success. If the corporation chooses to take the second option and decides to simply pay more to outsourced labor, then they will still outsource jobs, but they will be less competitive than they would be without this law—this would help disincentivize further outsourcing and would help American companies compete with outsourcers.

If a corporation wishes to continue outsourcing at low wages, they would lose their incorporation within the United States and would need to re-incorporate in another country. In losing their classification as a domestic company, these corporations would have restricted rights to spend money in our political system, be ineligible for some government contracts, and could easily be excluded from government stimulus/research grants for the development of new technology. Depending upon the country which the corporation re-incorporates to, there is also the potential for various trade issues that would complicate a business’s operations and would make it even more desirable to remain American.

To further increase the leverage of the “American company” label, I would suggest the following:

Demanding that all corporations which claim to be American to pay the American minimum wage is effective at punishing outsourcers, yet specifically targeted enough to avoid hitting small businesses. As small businesses in the United States (ex. a neighborhood restaurant) don’t usually utilize outsourcing, this initiative has no directly negative affect on them—it is likely that the price of goods will go up due to a decrease in outsourcing, but this will be compensated for. Small businesses would gain a competitive advantage over large multi-national businesses and would be able to compete on a much more equal scale then they do now (currently, large businesses are able to outsource more to low-cost countries and undercut the costs of small businesses).

While the requirement that American businesses pay the American minimum wage to their workers, regardless of where the workers are employed, may seem radical, it is a very viable solution to our outsourcing problems. Such a law would not violate current free-trade agreements and would use market pressures to attack outsourcing rather than overt bans. Corporations would still have a choice to outsource or not, but they would face disincentives if they chose to outsource production. Best of all, corporations which are currently giving their workers our minimum wage and which are actually making an effort to help their employees will be only marginally affected by this law; only those who have tried to exploit their workers would suffer consequences and face a radical restructuring.