The long history of violence and hatred in the Middle East has led to an extremely volatile, emotional and dangerous climate in issues regarding Israel and the Palestinians. This situation has evolved into a seemingly never-ending cycle of violence and hatred between the actors involved, and has been worsened by outside interference by other nations. Due to the number of actors and the variety of motives involved, the Israeli/Palestinian conflict becomes a very complex web of political and social factors that make lasting peace extremely difficult to sustain.

Israel has expanded its settlements into the Palestinian lands of the west bank and their right wing political party refuses to cease this expansion any time soon—the right wing within the United States has supported this campaign and has given Israel huge amounts of money for military purposes.

Palestinian radicals have engaged in a long-term campaign of terrorism that targets Israeli civilians and have acted in complete disregard for innocent lives, both within the Israeli population and their own—numerous Arab countries and extremist groups have supported these terrorist actions and have contributed support towards the goal of eradicating Israel.

The perpetuation of the Israeli/Palestinian conflict is due to the inability to reach a stable peace deal and is driven by a vicious cycle: The Palestinians lack control over their land and feel victimized, thus extremists in their population commit acts of violence against Israeli civilians; the threat of violence against Israeli civilians prompts Israeli politicians to enact heavy-handed retaliatory campaigns (in which innocent people die) and leads them to expand further into Palestinian lands—this expansion is used by Palestinian extremists to justify their terrorism and the entire cycle continues.

On some level, both sides recognize this cycle, yet claim that it was the other side that began it and thus is to blame for current hostilities. In the following sections, I will describe the actions and culpabilities of both sides of the conflict:

The Palestinians have been in a very unfortunate situation for decades—they were forced into refugee camps by Jordan and Egypt in the aftermath of the 1948 Arab-Israeli War and have remained in these camps even after control was shifted to the Israelis in the aftermath of the Six Day war. Currently, the Palestinians are stuck in a legal no-man’s land of refugee status and are desperate to gain control over their own lands. The terrible situation of the Palestinians has given birth to numerous extremists within their population—men who are willing to resort to terrorism and the mass-murder of civilians to achieve their goals.

The terrorist elements within the Palestinian population have launched over 12,000 attacks against Israeli civilians during the last decade. Palestinians terrorist attacks have commonly involved the launching of missiles into populated Israeli areas or the use of suicide bombers in crowded places (ex. bus bombings) and have been effective in striking non-hardened targets. Recently, suicide bombings have radically decreased from the past levels, yet attacks via missiles fired from Palestinian territories have increased. In the last year alone, the IDF reports nearly 1,200 rocket attacks into Israel, leading to numerous casualties—fortunately, the number of casualties is far lower than it could be because the Israeli military has developed the Iron Dome missile defense program which is able to take down rockets headed into populous areas.

The goals of the Palestinian terrorists are two-fold: the primary goal is to kill Israelis and strike out at Israel while the secondary goal is incite Israel to strike back and kill Palestinian civilians. As with most terrorism, the goal of attacking civilians is to promote terror and extort a population to comply with the terrorist’s demands: Palestinian terrorist hate Israel—they see it as an unjust occupier as well as the religious enemy (there is a long history of Muslim/Jew animus)—and want it to disappear. By attacking Israel, most Palestinian extremists hope to force Israelis out of the region and reclaim the entirety of the Middle East for Islam.

“They [Hamas] are the fighting against the false, defeating it and vanquishing it [Israel] so that justice could prevail, homelands be retrieved and from its mosques would the voice of the mu’azen emerge declaring the establishment of the state of Islam, so that people and things would return each to their right places and Allah is our helper.” 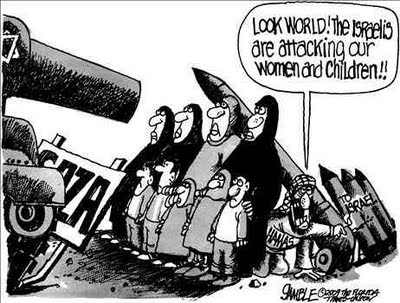 In this video from Fathi Hammad, a high-ranking member of the Palestinian Parliament and the Hamas terrorist group, we clearly hear him make the case that Palestinian extremists have made a concerted effort to turn Palestinian civilians into shields from Israeli retaliation.

“Accordingly [Palestinians] created a human shield of women, children, the elderly and the Jihad fighters against the Zionist bombing machine, as if they were saying to the Zionist enemy: We desire Death, as you desire Life.”

The state of Israel is in the unenviable position of being a very small country in the middle of a region filled with countries which consider it an adversary. Unfortunately, this status has led to Israel being constantly bombarded with terrorist attacks and periodically invaded on multiple fronts, by multiple armies. The ever-present threat of violence against Israel has become fertile ground for the growth of a militaristic and heavy-handed right wing party—the Likud Party.

The Likud Party of Israel is the right wing party which currently controls much of the Israeli government. Led by Prime Minister Benjamin Netanyahu, the Likud Party has developed a very heavy handed approach to dealing with the Palestinians. The Likud Party supports increasing the number of Israeli settlers to be allowed into the West Bank settlements and is a large reason why the Israeli military reacts with extreme force to Palestinian terrorism (resulting in civilian deaths).

Due to the fact that the West Bank is considered “disputed territory” until a peace agreement can be reached between the Palestinians and the Israelis, some Israeli groups (including the Likud) have supported allowing Israeli settler to live in the West Bank. While not a violation of UN Resolution 242—the UN resolution which gave Israel authority over the Palestinian territories until a peace deal is reached—the building of settlements on Palestinian land is simply not good policy. When peace is reached, these settlements will be lost, as they would be turned over to the Palestinians with the land, and until then, they only serve to be inflammatory. Palestinians get upset (rightly so) when they see Israel building within their borders, “contested lands” or not. in addition to the inflammatory nature of these settlements, they also make a peace deal more difficult, as they give Israel even more roots in Palestinian land that would need to be severed—the settlers are disincentivize from seeking peace simply because such a peace deal would result in them losing their land. Over the last decade, the number of Israeli settlers in the West Bank has dramatically increased.

The Likud Party supports the increase in Israeli settlement in Palestinian lands and has been one of the driving forces behind its acceleration in recent years. Not only does the Likud Party support increasing these settlements but many members of this party also support the permanent annexation of this lands into Israel and the virtual cessation of negotiations with Palestinians over the land. In promoting settlements that anger the Palestinians, the Likud Party has a hand in motivating the Palestinian extremists who attack Israel—this in not to blame them directly for the attacks perpetrated by these extremists, but it is true that their policies surrounding settlements are needlessly inflammatory, not beneficial to Israel and a large thorn in the side of compromise.

When terrorism occurs with Israeli borders, the Likud Party has been extremely hawkish in the response to the attacks. While it is natural and necessary to do something when your neighbor has the habit of lobbing thousands of rockets into your land every year, the Likud Party’s use of military force has led to the deaths of numerous civilians.

As many Palestinian terrorists hide within civilian populations, there is often the potential for extremely high levels of collateral damage when Israel strikes at terrorists. Unfortunately, the right wing politicians of the Likud Party appear to be very similar to the American right wing, in that they have shown little regard for the civilian casualties that could occur while fighting terrorists. Israeli Rocket strikes on Palestinian extremists have regularly killed civilians by accident and have been detrimental to the relationship between Israel and Palestinians.

While there is no real comparison with the terrorists who intentionally target civilians, the collateral damage of the Israeli military strikes has resulted in hundreds of civilian death. The fact that the Israeli strike-back operations don’t intentionally kill civilians does nothing to mitigate the fact that these civilians are dead. It is understandable to hate somebody who kills a member of your family and those who have lost people to the accidental “collateral damage” of Israeli operation will inevitably blame Israel for their pain. The civilian deaths that result from Israeli retaliation and prevention programs help fuel the conflict and are a major impediment to peace.

Regardless of whom you believe started this cycle of hatred and violence, the fact remains that it must be stopped for peace to exist in Israel and Palestine. Israel continues to build settlements within the West Bank, which gives Palestinian terrorists the excuse to lash out with terrorism. This terrorism causes Israeli politicians to lash out with their armed forces and allows them to justify continuing to build in the Gaza territory. Ultimately, this cycle in self-sustaining and, unless it is stopped, will result in massive pain for both Israelis and Palestinians for years to come.

Unfortunately, there are numerous countries which have interfered in this region and which have contributed resources to the sides of this conflict: The United States has given huge sums of military aid to Israel while numerous Islamic countries have given weapons and resources to the Palestinians. The United States government supports Israel because the political landscape within the United States necessitates that every politician give unwavering support to Israel, lest they be labeled as anti-Israel and get attacked by right wing groups. Many Islamic countries are run by theocratic extremists who despise Israel and see the Palestinians as a useful proxy to attack Israel with. While those in the USA and the Islamic world may have their reasons for fuelling this conflict, it is undeniable that the current trajectory is simply for both sides to keep using these resources to kill each-other.

3 thoughts on “THE ISRAELI/PALESTINIAN CONFLICT: A COMPLICATED ISSUE – PART #2”