With the many terrible things that are currently going on in the world, I feel the need to write something amusing and far less serious than my usual style. This article is written to be sarcastic and is not to be taken too seriously. Oh, and before anybody emails me and asks me whether or not I know that Santa isn’t real, let me answer that: Yes, I am aware that I am writing an article analyzing the political motives of a large imaginary man who lives in a mythical north pole and exists solely to perform an annual ritual of delivering an unfeasibly large number of gifts to children across the world at speeds which approach the speed of light. Deal with it J 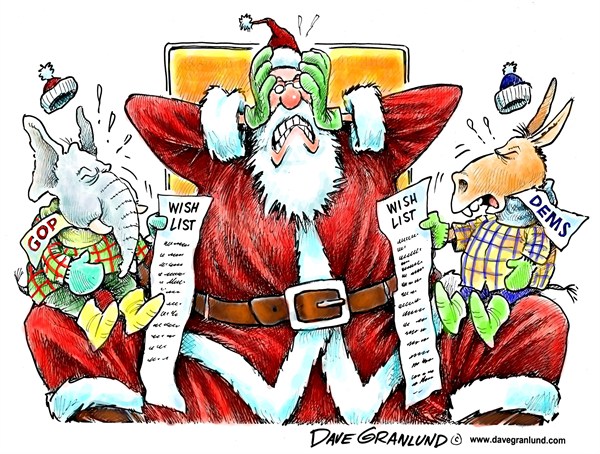 Santa Claus has become a cultural icon in the United States and is a construct that is practically synonymous with the “Christmas spirit”. Americans have latched onto the idea of Santa—with his benevolence and selfless giving towards all—to spur actual humans to try to emulate Santa by buying huge numbers of gifts for virtually everybody that they know.

Seeing this study got me thinking, and I have concluded that Santa Claus, as an idea, represents an interesting mix of both conservative and liberal traits which make him appealing towards everybody—people of every political persuasion find something to like within Santa, and they simply tune the rest out.

A wealthy old white man who lives an isolationist lifestyle, independent of any government regulation or taxation, couldn’t possibly be anything but a conservative, right?

Santa is ultimately self-sufficient and does not rely on any social structure to be successful: He pays no taxes, recognizes no government regulations, and doesn’t rely on “government handouts” to sustain himself. In fact, Santa only demands that the children who receive his gifts pay him with a little milk and a few cookies (perhaps explaining his weight issues). It is utterly inconceivable that Santa would ever be forced to go onto welfare, take social security, or require government-subsidized healthcare. By living the true libertarian ideal, Santa exists as a paragon for the conservative values of self-reliance and personal responsibility.

While he gives gifts to children (thus risking “dependence” or even “socialistic redistribution”), Santa has chosen to do this of his own volition and is engaging in voluntary charity. In this regard, Santa is living up to the conservative ideal of voluntary charity being the only allowable kind of redistribution—if he didn’t want to give gifts to children, there is no “gun to his head” forcing him to continue.

Even while giving gifts to children in the spirit of charity, Santa maintains his black and white conservative morality. Children who he determines good (presumably through surveillance procedures that would make VP Cheney and other American neo-conservatives very happy) are given wonderful presents, while children who deviate from his morality are given coal. Not only are the children who fail to make muster in Santa’s eyes denied wonderful presents, but they are given a physical reminder of their bad deeds through the mocking gift of a dirty lump of coal.

In order to make the gifts which he distributes, Santa has his own workers—the elves—which he pays whatever he sees fit to (I seriously doubt that there is an “elves union” which collectively bargains with the boss). If they didn’t like the labor costs and conditions which Santa imposed, the elves would simply move elsewhere (although, just as with the “free market” working conditions of the Marianas Islands, moving away from the north pole might be difficult if the elves lack their own reindeer). As is in line with conservative market theory, Santa gives his workers a “fair market wage” (presumably, room and board), in exchange for their labor (presumably, full time), independent of any government regulatory regime.

The final, but ultimately most important, things which makes Santa a conservative are that his worldview is based around a simplistic model of reality and that his logic is based around magical thinking. Modern American conservative policy has become so disconnected from reality (ex. their budget plan that cuts taxes, yet raises revenue) that they might as well be relying on Santa—a large man who rides a magic sleigh around the world at the speed of light—to make their programs work. Conservative policy, just like the concept of Santa, requires magic to work and a suspension of reality to believe in.

Santa is a generous old man who takes it upon himself to give presents to all, regardless of the cost of such a program or the station in life of the benefitting child. Given this idealism and desire to help everybody regardless of payment or feasibility, Santa must be a liberal, right?

Santa, at his core, is an idealist who delivers presents to the children of the world, regardless of the costs. Nobody is denied Santa’s gifts due to a lack of ability to pay him. Just as with most liberal programs, the poor are not expected to pay for things which they cannot possibly afford, and it is up to the rich to help buoy the system—if his waistline is any indication, Santa is doing perfectly well for himself simply through living off of the cookie donations of the more wealthy children.

While not every child gets present from Santa, he does not discriminate based upon race, gender, or wealth—all children are given an equal shot to be in the “good” list, regardless of their personal circumstances. Through using such a purely meritocratic method of distributing his gifts, Santa demonstrates the liberal ideal that everybody should be given “equality of opportunity.”

Santa’s annual gift delivery is limited only by the number of children who he must deliver to and he is apparently unaffected by the laws of physics (although, if the Rudolph the Red Nosed Reindeer song is any indication, fog really messes with his operation)—this immunity to resource shortages and feasibility issues is what makes Santa’s gifting program possible. Unfortunately, many other liberal problems lack this immunity and end up running into issues of funding and implementation (ex. you could give everybody exceptional healthcare, but this would be prohibitively expensive). By removing the limits on resources and simply implementing a liberal program of giving goods to the public, Santa represents the ideals of many liberal policies, detached from any realism.

Just like many liberals, Santa sees everybody as part of a larger society and works to treat everybody as though they are part of his community—he transcends all borders and seeks to help people regardless of their nationality. By catering to the needs of all and not caring simply for his (and his country’s) self-interest, Santa represents a liberal international relations approach.

Ultimately, Santa represents the good intentions which are represented in liberal policies (equality, giving, making sure that even the least fortunate are taken care of) without the possible difficulties of implementation. He requires no resources to make his policies a reality and he completely bypasses the difficult choices that come when liberals must limit their programs based upon realistic resource limits.