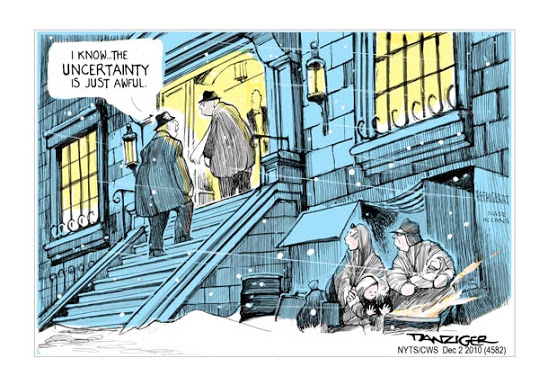 The term “economic uncertainty” refers to a situation where the economic climate in a country is so unstable as to hinder investment. There are numerous situations which create economic uncertainty, including, but not limited to, social upheaval, currency crises, rapidly changing regulations/taxes, and the formation of market bubbles. Individuals who are considering investing capital must weigh potential risks with potential rewards in relation to their prospective investments, and uncertainty is a major factor in determining risk. If an investor is unable to predict the conditions which they will have to operate with, there is a decreased likelihood that the smart investor will invest significant capital.

While market uncertainty is a very real and relevant phenomenon, conservative groups and politicians have intentionally misused the concept of economic uncertainty to gain political advantages. Conservatives raise the specter of “Economic uncertainty” whenever there are discussions of tax or regulatory increases, as well as during debates over the removal of subsidies. They claim that virtually any increase in regulation or tax rates causes crippling uncertainty, thus reducing the growth of the economy and increasing unemployment. Put plainly, these claims are both false, and intentionally deceptive.

A good, recent example of such a use of the term “uncertainty” by a conservative politician is this:

“The number one reason out there why jobs are not being created: Uncertainty. They don’t know what’s going to happen with the taxes; they don’t know what’s going to happen from regulation.”; “the Democrats have failed to lead on tax cuts. They’re going to want to leave the House without dealing with it. That uncertainty itself is keeping capital on the sidelines and stopping jobs from being created in America.” – Kevin McCarthy (R-CA-22), 9/26/10

McCarthy’s statement, demonstrates either a profound ignorance of the term uncertainty or a willful misinterpretation of its application. At the time of his statement, virtually every reputable economist considered the crippling lack of demand for consumer products, housing crisis, and damage from the 2008 economic crash as the causes of the lack of investment, not uncertainty. Uncertainty over tax rates (which were at a record low) and regulatory rules were not significant factors, yet his desire to promote the conservative ideology surrounding these issues led him to intentionally misdiagnose the problems (I assume that he is not simply ignorant and without competent staff to brief him).

While they almost always use it speciously, the uncertainty argument is a major tool of the conservative movement; progressives must take steps to debunk the false narrative of “economic uncertainty” by conservatives and turn it back on them to fight against their extreme tactics. By debunking the idea that regulatory and tax reform cause uncertainty, progressives will erode much of the rationale behind the conservative argument against such reforms – this will not end their resistance to tax and regulatory reform, merely force them to find a new rationale to justify it in within their ideology. Progressives and Democrats should utilize a two-stage attack on the conservative “economic uncertainty” argument in order to debunk its premise and reverse it upon the Republicans.

The first step in reversing the conservative “uncertainty” argument is for progressives and Democrats to refute the conservative narrative on which policies cause economic uncertainty. Through a concerted effort, the conservative movement has successfully branded any potential increases in taxes and regulations as inherently increasing uncertainty, and has used this label as a rhetorical bludgeon against those who wish for sane taxes/regulation.

Uncertainty is an ever present factor in an economy and is only dangerous when it reaches a level which stifles investment; investments carry an inherent risk, and there is no real way to completely remove the uncertainty which this risk creates. Dangerous levels of uncertainty are caused by factors which drastically increase the risk of investing and are difficult to predict accurately. When looking at uncertainty, the actual economic or social factors matter less than the predictability and fluctuations for each condition. In essence, it matters less what the conditions of the business climate are, just as long as they are stable and predictable to business interests they will not cause uncertainty. Even if taxes or regulations are high, just as long as they are static and investors are able to work them into their business calculations, very little uncertainty is created.

The conservative “uncertainty” argument is most commonly used in arguments over tax rate increases and tightening regulatory regimes:

Taxes: Conservatives argue that any discussion of increasing tax rates, even simply the removal of temporary tax breaks, will increase uncertainty and stifle investment. This argument assumes that increasing tax rates on the wealthy will cause these people to stop investing due to a decreased return on investment—this assumption is entirely incorrect.

Wealthy investors will invest as long as it makes them a profit, even if a significant amount is taken out in taxes. It is true that wildly fluctuating and unpredictable tax rates (ex. a rapid swing of capital gains tax rates from 15% to 75%) CAN make the market uncertain, but current discussions of tax rates are nowhere near the level which would create significant uncertainty.

Conservatives use their uncertainty argument to attack regulations by claiming that potential increases in regulations spook businesses and stop them from hiring; this argument is less groundless than the conservative argument surrounding tax increases, but it too fails to pass muster. Current regulatory regimes have been intentionally suppressed by lobbying and are nowhere near adequate. Improvements to inadequate regulation, while damaging to polluters, are necessary for the health of society. The amount of uncertainty which is created by regulatory increases is far outweighed by the benefit to society garnered from the increased regulations.

Theoretically, the government could promote the ultimate regulatory certainty in investment by removing all regulations of industry. As is evident by past polluting/corporate abuse incidents, the abolishing of regulations would be disastrous to society. The conservative narrative ignores the need for regulations and focuses on the uncertainty which is created when new regulations are being discussed—this is akin to somebody decrying firefighters for causing water damage, yet ignoring the fact that they are trying to put out fires.

In addition to the fact that certainty must be weighed against the public interest, the conservative argument is also flawed due to the fact that regulatory increases only cause uncertainty when they increase. Once regulations are reformed and stabilize at their new level, they produce no uncertainty.

The arguments which progressives and Democrats must utilize in order to attack the conservative uncertainty argument must be based in economic theory, yet simple and memorable enough for the lay-person to easily digest. Here are two examples of such arguments:

Any argument used to debunk the conservative narrative should be tailored for maximum simplicity and listener recall. Uncertainty, as a concept, is widely misunderstood by the lay-person (partially because of conservatives misusing it in political arguments), and any complex argument will likely go over the heads of the general public.

Once the language which will be used to debunk the conservative narrative is decided upon, progressive and Democratic politicians should repeat it on a national scale. Having numerous politicians repeat the same sentiment across various media networks will get people discussing the uncertainty argument. It is unlikely that every listener will be swayed from the conservative “uncertainty” narrative, but it is possible that a significant portion of the American people will begin to reject it on its face. Ideally, this campaign will weaken the conservative argument, while setting the stage to discuss the factors which truly cause uncertainty.

War is a leading cause of economic uncertainty, particularly when the conflict happens in a country with significant energy resources. Countries which are engage in violent civil unrest or inter-national conflict often suffer uncertainty due to potential damage to factories, shops, or the transportation infrastructure, as well as a general decrease in the economic welfare of the local population. If producers are unable to ensure that their factories are secure and that their goods will safely reach their customers, a large amount of uncertainty is created (ex. Somalia doesn’t have a good atmosphere for economic investment). While conflicts are usually localized to a country, thus the uncertainty created by war is usually limited, violent conflicts within energy producing countries can have wide-reaching economic consequences.

When conflict creates uncertainty in an energy producing country, the production of coal or oil is disrupted and the disruption ripples into the global economy. Every country requires energy to function, much of which is currently derived from fossil fuels, and a disruption of the supply of such fuels makes all production more expensive.

Conservatives, particularly neo-conservatives, have a record of promoting increased aggression abroad—the Iraq and Afghanistan wars are two examples of such conflicts. The promotion of war, particularly in the Middle East (a common target for modern conservative aggression), increases the global uncertainty over oil process and has increased the price of gas in the world market.

A lack of proper economic/banking regulations has been shown to increase uncertainty when the lack of regulations causes excessive gambling, financial fraud, or even economic collapses. Without proper regulations, investors cannot be certain that they are buying a quality good, thus they are less likely to invest (uncertainty). Even if investment is sustained, fraud and financial gambling destabilize the economic system and can even cause an economic crash. An economic crash creates huge amounts of uncertainty because it makes people fear for their jobs, stifles investment, depresses market demand, and makes it more difficult to predict the future health of the economy. The ultimate modern example of how a lack of regulations can dramatically increase uncertainty is the 2008 economic crisis: Inadequate regulations on banks, a fusion of commercial and investment banks (caused by the repeal of Glass-Steagall) and culture of banking fraud, combined to cause the 2008 economic crisis which nearly destroyed the world economy—destruction which devastated the American economy and has placed Europe on the brink of economic catastrophe.

American conservatives support the widespread diminishing of regulations, if not the complete abolition of regulatory powers held by the government. As we saw in 2008, this stance creates the circumstances which lead to widespread economic uncertainty and damage to the economy. Progressives need to draw the direct link between conservative deregulation and the economic crises which so dramatically increase economic uncertainty.

Modern American conservatives have utilized the tactic of political hostage-taking in order to push their agenda while in the minority. On numerous occasions—such as the debt ceiling fights, Bush Tax cuts reauthorization fight, and the 2011/12 budget fights—the conservative Republicans have refused to deal in good faith and have virtually held the good of the country hostage. By refusing to deal and steering the country towards a figurative cliff, the Republicans have forced Democrats to capitulate to conservative demands. While effective as a negotiating tactic, the use of political hostage-taking dramatically increases economic uncertainty and damages the country’s wellbeing.

When the public cannot be certain that the United States has a functioning government and will honor its debts, economic uncertainty is dramatically increased. The United States government is a tremendous force in the American and world economies, thus any dysfunction in American governance has the potential to translate into the economic market. During times of government conflict, government contracts to corporations, payments to government workers and the continuation of government services (ex. the TSA or postal services) are threatened; if government workers cannot be certain that they will be paid and government contractors face the potential that their services will be abruptly cancelled, uncertainty is dramatically increased.

One thought on “Progressive Strategy: Debunking the Term: Economic Uncertainty”