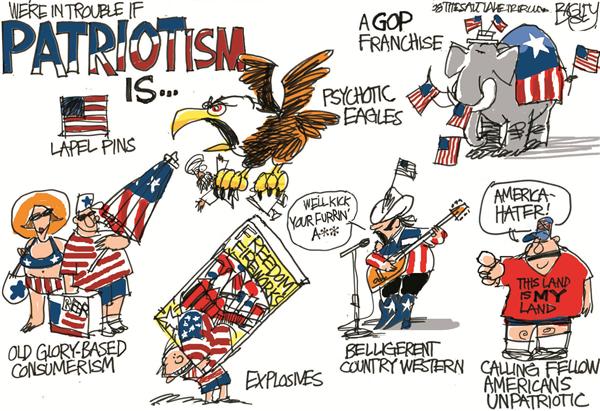 All too often in the United States, conservative Republicans are considered the “patriotic” political group, while liberals and progressives are labeled as “not real Americans” or “apologists” for America; these labels are extreme mischaracterizations and must be debunked by non-conservatives.

By portraying themselves as “the patriotic party” Republicans are able to take an automatic high ground on many policy debates which revolve around national defense or “traditional American values”. If the public has the pre-conceived notion that a party has an advantage over other parties in the quality of patriotism, it biases the public to support defense policy created by that party; we see this effect in the portrayals of the Republicans as the “strong on defense” party during the latter half of the 20th century.

The current discrepancy in the perceived patriotism of the conservative right and other parties has been due to several factors:

In order to retake the language of patriotism, we must define the term for the public. According to the Oxford English Dictionary, Patriotism is defined as such:

Patriotism: the quality of being patriotic; vigorous support for one’s country: a highly decorated officer of unquestionable integrity and patriotism

If we look at the central ideological pillars of modern American conservatism—cutting taxes and shrinking the government, increasing military activities, and imposing a Christian conservative social policy—we see that these policies are in no way patriotic. Modern conservatives are intensely nationalistic in their rhetoric but, when it comes to personal sacrifice for the good of the country, often fall short of their ideals.

Cutting taxes and shrinking the government is, by definition, a policy which attempts to reduce the very government that the conservatives attempt to portray themselves patriots of.  By their own admission, conservatives wish to shrink the government of the United States, reduce taxes on the wealthy, and grant more powers to the corporate private sector; none of these policy ideals are patriotic, as none of them are aimed at supporting the American people as a whole, or the American government.

It would be possible to argue that conservative policies are good for society, thus patriotic, but, as they policies have been shown to be ineffective, this argument holds little weight. The conservative movement is currently pushing policies which, while beneficial to a few, have been shown to be extremely damaging to society as a whole (Ex. tax cuts for the rich, deregulation, austerity). The conservative movement’s promotion of failed policy makes them either patriotic, yet profoundly unintelligent, or greedy, corrupt and unpatriotic.

The current conservative economic agenda does not purport to benefit society, but rather attempts to institute a social Darwinian system of “rugged individualism” and complete self-reliance. This system involves reducing social programs, privatizing public services, and signing power over to the corporations so that the private sector gains ever more power to affect society. The conservatives assert that privatization will allow the competent to advance, without the need to pay of the less able, and society will benefit as a whole. By their own admission, the conservative economic policy agenda is aimed at supporting a small percentage of American “job creators”, and removing the “unproductive” members of society from the welfare rolls. By sacrificing the interests of the majority, in service for the “job creators”, the conservative economic ideology is inherently anti-patriotic (antithetical to the health of the American public or government).

Progressives should make the argument that paying taxes to support society is, in and of itself, patriotic. Sacrificing some personal wealth (through paying taxes), in order to support the improvement of the social infrastructure and the general welfare of the American people, is an inherently patriotic act; avoiding taxes and constantly attempting to strangle the government, all for personal  monetary gain is entirely selfish and unpatriotic. Progressives and Democrats should begin making the argument that taxes are not simply a matter of economics, but rather one of a patriotic duty. Those who love this country and wish to improve it should have no problem sacrificing a portion of their wealth to support it.

Modern American conservatives are, virtually without exception, supporters of increasing military spending. Although there are libertarian Republicans who reject increased military spending, these politicians are in a clear minority and rarely sit in positions of power within the conservative movement; these libertarians do not deserve to be tarred with the same brush as the rest of the conservatives, as they truly believe that their policies are improving the health of the country. Support of increasing military spending is often conflated with a sense of patriotic defense of country, thus conservative politicians can us this to claim high levels of patriotism. 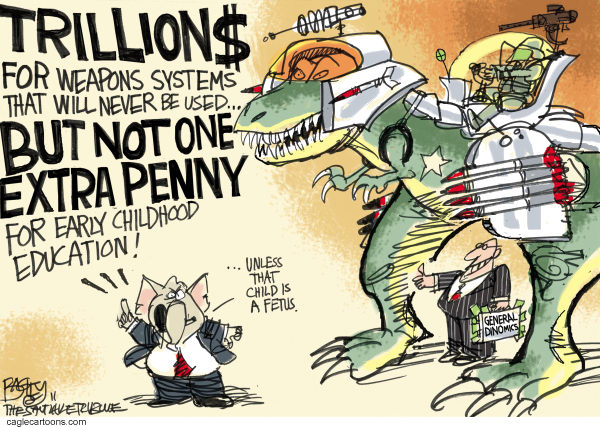 Many in the United States make the mistaken assumption that the more money which is spent on defense, the safer we will be. It is simply not the case that more defense spending automatically means more safety, and this mistaken assumption can often lead to a misappropriation of funds and a mis-apportionment of political credit.

Quite often, defense contractors lobby politicians—on both sides of the isle—in order to increase military spending and this their own profits. The increased expenditures caused by this lobbying are wasteful and are based around corruption and corporatism rather than good policy. The result of such spending is most often wasted resources, weapons which the USA does not need, and increased hostilities, not improvements to national security.

The perfect example of a redundant, yet defense corporation friendly, program is the F-22 Raptor program. The F-22 is a highly advanced, stealth-fighter jet which was developed by Lockheed Martin and promoted as the future of air combat. The United States government has spent over $74 billion[1] over the entire life of the F-22 program, yet this fighter has never seen action nor is there a strong likelihood that it will ever be used in the near-future. The F-22 program was a massive waste of taxpayer money and likely only remained active due to lobbying efforts by Lockheed Martin. Lockheed Martin has spent massive amounts of money lobbying to protect the F-22–$15 million in the 2011 alone—and has been able to sustain the wasteful fighter program through “contributions” to politicians.

Proposing increased defense funding and pushing for needless wars, all for the benefit of and contributions from lobbyists, is not patriotic; it is dangerous and self-serving. The individual politicians, as well as the corporations which lobby them to increase military spending, benefit from increased militarism but the rest of the country suffers. The defense budget eats into the funding of useful programs, thus reducing the resources available to programs which are truly beneficial to the American public. Wars based upon militarism, rather than need, only results in profits for the suppliers of the tools of war and pain for the countries involved in the conflict.

Attributing patriotic motives to everybody who promotes increased spending and war makes no logical sense, and results in many who simply wish to be paid by lobbyists to be labeled as patriots. The conservative movement (particularly neo-conservatives) promotes endless war abroad and increased money wasted upon defense corporations.

Progressives should make a clear and concise case to the American public that the conservative positions of war and military waste are simply not patriotic; such policies harm the United States, eat resources which can be used to support domestic investment, and can promote increased anti-American sentiments abroad. These positions are caused by either a complete lack of understanding of the needs of the military, a desire to support the defense industry, or an ideological belief that militarism is beneficial to the country. None of these justifications are rational, nor are they patriotic.