The Private Prisons of America

The United States is one of several modern countries which utilizes privatized prisons in conjunction with its public prisons system.

The entire idea of “private” prisons is actually a bit of a misnomer, as the prisons are not fully “private” in nature. They do not operate in a market setting and are essentially public prisons that have had their operations outsourced to a private corporation. Rather than have public officials run the prisons in the public trust, privatized prisons are run by a board of directors motivated by one thing: profit.

Private prisons operate as normal, public prisons do, but in practice they function managerially more like a hotel. The government pays the private prison corporation for each prisoner’s room and board, as well as the costs of managing the prison. Not only can these prisons make money by cutting “costs and expenses” (usually by cutting guard salaries and prisoner accommodations), but some can also benefit from prison labor contracts that let them use prisoners as cheap laborers.

Private detentions systems are not a new development in our country, as we have had private detentions arrangements since before the civil war. After the civil war, there was a widespread system of private incarcerations called “convict leasing programs.” In these programs, private corporations would lease a prisoner, becoming able to compel them to work; in exchange for their work, the corporation would pay the costs of incarceration and the state would make a profit rather than having to shoulder the burden of imprisonment. Unfortunately, this system became the vehicle for racial discrimination and exploitation where African Americans could be freed from slavery only to be arrested for petty crimes and sent back to compulsory labor camps.

The privatization of American prisons is worrying to many civil rights organizations, as there are numerous issues that accompany putting a profit motive into justice. Of these issues, there are a few which are more commonly talked about then others:

Many private prisons corporations justify their existence by arguing that they “cut costs,” in order to make prisons more; they claim that because they’re more efficient with their use of resources, they’re a better financial investment then public prisons. While private prisons do spend less on labor and prisoner accommodations, this does not necessarily mean that they are superior.

When a prison becomes privatized, the private prison corporation commonly fires all of the guards, destroys their pensions, and asks them to come back on as an employee for less money and fewer benefits. This evisceration of employee benefits allows these corporations to say that their labor costs less (and it does), but it fails to account for the fact that this cost-cutting is on the back of workers. The private prisons aren’t more efficient; they just aren’t bound by the arrangements with the public prison guard unions and are able to screw their workers. As a consequence of the low-pay, private prison guards are commonly less experienced and capable then public prison guards.

Guards aren’t the only people to suffer from private prison cuts. The prisoners in private prisons are often detrimentally affected by prison privatization. While there are standards of treatment and accommodations for private prisons, they often toe the line and supply as little as they can to prisoners. By giving as few services and rehabilitation programs to prisoners as legally allowed, private prisons increase their profits.

As a related issue, private prisons actually benefit from withholding rehabilitation services in more ways than simple cost-cutting. By making it more difficult for prisoners to be rehabilitated (ex. reducing drug treatment), private prisons get more people to come back into their establishment through recidivism.

In short: private prisons may technically “cost less” to operate, but the benefits of this are only for the corporation and the costs are all shouldered by the people. Guards are paid less for their jobs, which, at the best of times, are immensely stressful and difficult. Prisoners are supplied with fewer opportunities to better themselves and are more likely to re-offend.

Probably the most dangerous aspect of prison privatization is the insertion of a profit motive into the criminal justice system. If people are making money off of imprisoning people, logic dictates that they will attempt to increase their profits by making sure more people are imprisoned. Through lobbying and campaign “donations” private prisons are able to sway lawmakers to support laws which would benefit their economic interests at the expense of the public good. To put this lobbying into perspective: Since 2006, the GEO group spent $1.3 million in lobbying to politicians in the state of Florida alone—this amount only includes one private prison corporation in one state.

When a prison is publically operated, there is no incentive for more people to be incarcerated and nobody benefits from draconian and unfair laws; even prison guards don’t get more money based upon the number of people in society that are in prison. If there is no benefit for unjust incarceration, then there is a disincentive for groups to increase incarceration levels beyond what is absolutely necessary. Unfortunately, prison privatization turns this on its head and allows individuals to make a profit by imprisoning anybody, regardless of guilt or society’s needs. In fact, low-level non-violent offenders (ex. drug addicts and illegal immigrants) are easy to imprison (less likely to be violent), and actually the most profitable people to a private prison corporation.

Private prison interests have a history of lobbying on behalf of “tough on crime” legislation, including mandatory minimum sentencing laws, harsh immigration laws, and tough sentences for drug crimes—for example, Arizona’s infamous SB1070 “papers please” law was written by a lobbyist for private prisons interests. This lobbying is an attempt to increase the prison population and thus increase the population that can be exploited by private prisons corporations for a profit. 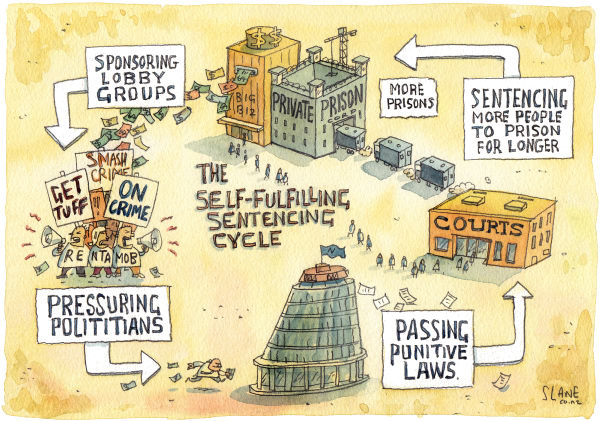 As previously mentioned, private prisons cut “expenses” and claim that they are less expensive to operate then public prisons. While this is true, the public never sees the benefits of this “cost cutting,” as the decreased costs are funneled into the pockets of the corporations’ executives. In addition to this, private prisons game the system to take only the healthiest and least expensive inmates, leaving the sick or dangerous ones to the state.

Private prisons don’t have to accept all prisoners, so they cherry-pick those that are least costly to incarcerate and leave the rest to the state. Any prisoner with severe illnesses costs the prison money, as they need to give the prisoner treatment; so private prisons just don’t accept these people. By leaving these costly prisoners to the public prisons, private prisons can save money and make the claim that they are very efficient. This selection is simple cost-shifting that gives private prisons the appearance of thrift, while making the public shoulder the real costs.

Put plainly, the money that is taken away from the prisoners’ rehabilitation and the guards’ salaries goes directly into the pockets of these executives (not to mention the pockets of the politicians who receive lobbying money from these private prison interests).

We, as a society, need to determine whether or not this shifting of profit to the executive and pain to the imprisoned, the guards, and those who would be caught up in the criminal justice system’s profit-making scheme is how we would want our society to operate.

Private prisons are not more efficient then public prisons, they promote corruption, and they are less effective in reforming criminals, so why is it that we even consider using them? The answer to this is, of course, money being sent to politicians by these corporations. The American people shouldn’t stand for this and we should work to push back against the growing trend of prison privatization in our country.

8 thoughts on “The Private Prisons of America”