Is “Stop-and-Frisk” a Form of State-Sponsored Terrorism? 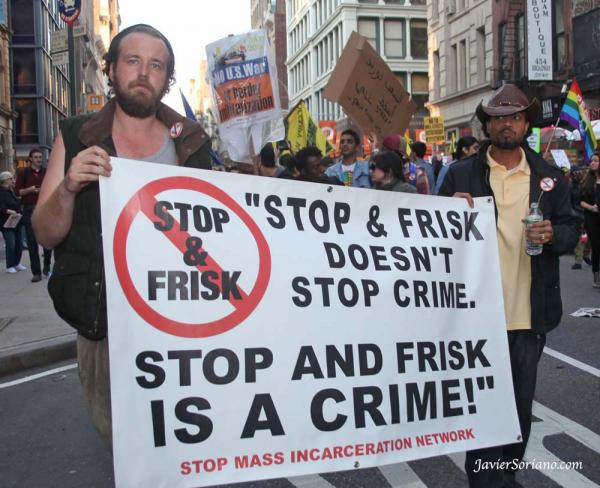 Since the 1990s, the New York Police Department has utilized a highly controversial program of warrantless searches called “stop and frisks.” These searches have become a major problem in recent years, as the number of stops performed by the NYPD has dramatically increased.

Originally, this type of search was designed to let officers search suspects without a warrant in order to ensure that they don’t have weapons that pose a threat during an arrest, but its application has been much broader than the original intent. A policy that was created to allow officers to ensure that they are safe during an arrest has turned into an excuse to stop and search people for drugs, even if there is no reasonable reason to search them.

In addition to its discriminatory application, the searches simply are not effective. Of those stopped in the past 2 years, 88.5% were completely innocent and were harassed for no legitimate reason. NYPD officers have been using the stop and frisk program as a way to search anybody that they want to, without a warrant, probable cause, or any justification beyond a hunch.

Several cases have been filed challenging the NYPD’s program, some challenging the law on constitutional grounds as a violation of the fourth amendment protection against unwarranted search and seizure. During recent testimony of one such case, Floyd et al. v. City of New York, et al., (the “et al.” is simply a legal term to indicate multiple plaintiffs because this is a class action lawsuit) an extremely disturbing statement has come to light.

While many activists and civil rights groups have claimed that the NYPD’s stop and frisk program is discriminatory—a claim backed up by statistical evidence—the NYPD has never admitted that it is intentionally targeting minorities. NYPD spokespeople usually ignore the racial disparity altogether or justify the disproportionate racial nature of the stops by saying that they simply go where the crime is.

Unfortunately for the NYPD, testimony by a New York State Senator during the Floyd case disputes this claim. In his sworn testimony, State Senator Eric Adams recalled meetings with Police Commissioner Ray Kelly where Kelly stated an intent to “instill fear” in minorities through stop and frisk. Here is a quote from Senator Adams’s March 2013 Federal Court testimony:

“I heard him on two different occasions indicate that we’re using this policy to instill fear into African American and Hispanic youth, so each time they leave their home, they feel as though they can be stopped by the police,”

If this statement by State Senator Adams is true, it represents proof that the very worst fears of the critics of stop and frisk were true. The NYPD has been intentionally targeting minority communities with intimidating and illegal tactics in order to cause them fear. This comment indicates that the racist application of the stop and frisk law was not just an unfortunate by-product of latent racism held by police officers, but a deliberate policy decision by the  NYPD top brass.

The idea that police would intentionally target a minority group in order to make them fear walking the street is not a new concept, but it is one that should not exist in our society today. We saw such deplorable behavior occur regularly in the old South, where police would harass, arrest, and even kill completely innocent African Americans in order to “keep them in line” and promote a climate of terror. Unfortunately, this situation demonstrates that we are not yet in the “post-racial” society some claim to be, and that action must be taken to prevent the continued terrorization of minorities in our cities. 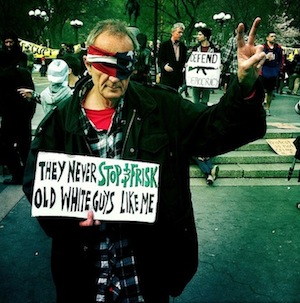 Stop and Frisk as State-Sponsored Terrorism

If one believes Senator Adam’s testimony, one could realistically argue that the NYPD leadership has been engaged in state-sponsored terrorism against groups that they have sworn to protect. According to the United States Code of Federal Regulations, terrorism is defined as such:

“The unlawful use of force and violence against persons or property to intimidate or coerce a government, the civilian population, or any segment thereof, in furtherance of political or social objectives”

Does the conduct of the NYPD involve the use of force or violence? Yes, it is a fact that the ability of the police to stop and search an individual on the street is an exertion of force. Force can include violence, or simply the threat of violence (ex. being beaten and arrested if you refuse to comply with a stop and frisk).

Is the NYPD’s use of force “unlawful?” Yes, as the NYPD’s application of the stop and frisk program is discriminatory and a violation of the 4th Amendment, it is unconstitutional and, by definition, “unlawful.” This is not to say that such a program is “illegal” and can be prosecuted as a crime, but that it is simply not a program that conforms with constitutional protections (similar to when southern cities would violate federal equality laws during the civil rights era).

Does the conduct of the NYPD target “a government, the civilian population, or any segment thereof?” Yes, the NYPD’s “Stop and Frisk program is targeted at minority communities within the city of New York City. Statistics indicate that a hugely disproportionate number of those stopped were poor, young, male minority Americans, thus this is the target group.

Was the intent of the conduct intended to cause fear in service of a political or social objective? Yes, at least within the upper levels of the NYPD. Commissioner Kelly’s intent was to instill fear in the minority community of his jurisdiction—this was testified to by a highly reputable source with no reason to lie and has been supported by the statistical evidence.  This intent to cause fear in a population is very important to the defining of terrorism, and I believe that Commissioner Kelly’s intent was to utilize fear of police harassment to terrorize NCY’s minority communities. In his mind, this tactic is perhaps seen as an effective way to fight crime, but that does nothing to change the results or guiding intent of the program.

It must be noted that I am in no way saying that the individual police officers who are simply enforcing the law are engaged in terrorism. Those individuals are exerting force and may be acting in contravention of the constitution, but they are simply following the program that their superiors put into place. Unlike with Kelly, there is no way to determine that their intent is to terrorize minority communities and they may simply be doing what they have been told is best.

Ultimately, it doesn’t matter that a vast majority of those stopped and frisked are innocent and are let off without charge; the simple fact that they were stopped without reasonable cause in the first place is bad enough. Personally, I am white and have never been subjected to a constant fear of being stopped by the police, but I can imagine how bad it would be—living every day knowing that simply walking down the street could lead to you, at any moment, being singled out and harassed for no reason in particular. Being forced to prove your innocence and justify your actions to armed and possible racist individuals who have a history of harming people like you for trivial things (ex. walking too fast, reaching into a pocket, etc.). I don’t care how brave you are, this would wear anybody down and is not something that we should tolerate happening to any racial group in our society.

While I have no hope that Kelly will be prosecuted for his behavior, I think that we should look at this situation very carefully. Do we want to live in a society where the enforcers of the law are intentionally singling out a group of people to persecute unlawfully?

The brand of terrorism that Kelly is perpetrating on minorities in New York City may not be as overt or violent as other brands of race-based terrorism, but the intent remains the same—to instill such a fear in a minority group that they are unable to participate equally in society. People with this intent have always existed and will likely always exist, but we must not let them use our publicly-funded law enforcement to facilitate their bigotry.