On April 17th, a fertilizer manufacturing plant in Texas suffered a catastrophic malfunction that led to a giant explosion. Located near the city of West, Texas, this explosion killed numerous people and is an illustration of just how dangerous poorly regulated chemical manufacturing can be to a community.

The West fertilizer plant explosion was truly gigantic, killing 14, injuring nearly 200 and destroying dozens of structures. To put the sheer power of this explosion into perspective: the explosion left a 93-foot diameter, 10-foot deep, crater where the plant used to stand, and seismologists say that it caused a 2.1 Richter Scale earthquake felt 50 miles away.

Here is an amateur video of the explosion:

While there is no way to quantify the cost of a lost life, the total structural damage and healthcare costs of the explosion are almost certainly in excess of $100 million dollars.

Many may not look at fertilizer manufacture as a dangerous process but some fertilizers are extremely reactive; this makes them unstable and potentially very dangerous if handled improperly. The West Chemical plant was anhydrous ammonia and stored large quantities of ammonium nitrate in its storage space—these two chemicals are both reactive and highly explosive materials.

Ammonium nitrate is both a fertilizer and a very potent explosive material. In appearance, it resembles coarse salt and it is commonly used by farmers to fertilize their crops and maintain a proper nitrogen balance in the soil. Unfortunately, in addition to being used by farmers, ammonium nitrate has been used by numerous bombers in combination with other materials (that I am not listing here, for obvious reasons) to create a very potent explosive mixture—it is this mixture that was used by Timothy McVeigh to carry out his Oklahoma City Bombing.

At approximately 7:30PM, on the evening of April 17th, local police and fire were alerted to a fire at the local fertilizer plant. Upon arrival, these first responders had only a few minutes to assess the situation before the explosion ripped the West Fertilizer plant apart, killing ten of them instantly. Currently, we do know that the explosion was primarily due to the over 270 tons of ammonium nitrate present at the plant, but there is no real proof as to what caused the fire that ignited the explosive materials. 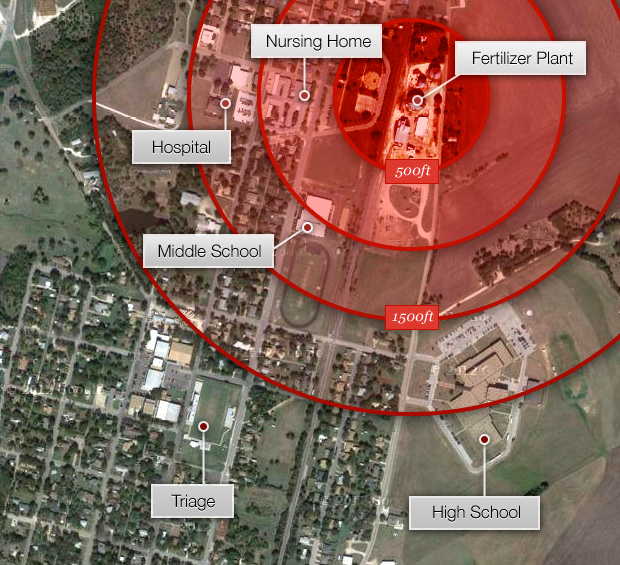 While this is simple speculation until more information is available (the disaster scene is a crater and the building is currently spread out over several square miles), it appears that an accidental fire ignited a leak in one of the plant’s anhydrous ammonia tanks, causing a conflagration. As this fire spread, it eventually found its way into the ammonium nitrate storage area and a massive explosion was the result.

This theory of an accidental explosion is supported by several facts:

First, a terrorist attempting to use the plant in an attack would have set the fire in the building with the ammonium nitrate and wouldn’t have left the explosion to chance.

Second, this plant represented tons of poorly regulated explosive material that could have been stolen and converted into many other bombs, thus it is unlikely that a terrorist would have blown the plant in place.

Third, the explosion of a fertilizer plant is in no way unprecedented, and all such previous explosions were due to negligence, accidents, or poor maintenance—other than its proximity to a date significant to right wing terrorists, there is nothing to suggest that this explosion was simply a tragic accident.

Given the fact that the center of the explosion was situated in the space used to house hundreds of tons of ammonium nitrate, it appears that the fire migrated into this storage space and set off a chain reaction. Even a small fire, when introduced into a pile of explosive chemicals, can cause a huge explosion. In essence, the entire storage building became a giant pipe bomb and the relatively minor fire was simply the igniting agent.

Unfortunately, it appears that firefighters were not warned about the sheer quantity of explosive ammonium nitrate when they arrived at the sight because regulators had no idea about the scope of the problem and the plant manager had not communicated with the firefighters (according to their dispatch).

While we don’t yet know what caused the explosion, we do know several very worrying things about the plant that indicate extreme oversights in regulation. Numerous regulatory bodies simply dropped the ball in regard to the oversight of this particular fertilizer manufacturer:

In addition to the oversights by regulatory agencies, the damage of the explosion was worsened by the fact that it was in close proximity to many other buildings. In addition to homes, the West Fertilizer Plant was near a school and a retirement home.

Put plainly, the fact that the West Fertilizer Plant was next to a school and a retirement home is an unforgivable failure of land management. Fertilizer plants sometimes blow up, and placing two high-risk (children and old people) buildings next to a potential bomb is an unbelievable mistake.