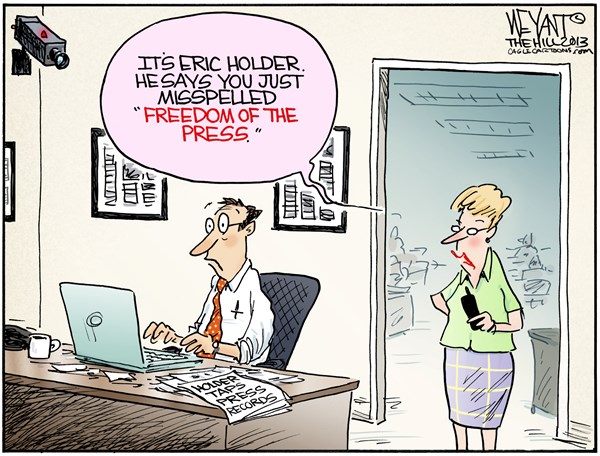 Before his political career began, Barack Obama was an untenured constitutional law professor at the University of Chicago; as such, he clearly should have an advanced understanding of the 1st Amendment, particularly in regard to its protection of the press. Unfortunately, the Obama administration and Eric Holder’s Department of Justice have demonstrated that they either lack such an understanding of the 1st Amendment or simply don’t care if they violate its protections of press freedom.

Throughout the last five years, the Obama administration and the DOJ have attacked press sources with un-paralleled aggression and, more recently, even attempted to assert that journalists who report on classified information are committing a crime.

If the press loses the ability to report on the misdeeds of those in power, then it is no longer a free press. Without the free press, governments become unaccountable to the voter, as the citizens never get a clear and accurate account of the actions of their government—if all they are allowed to hear is news that reflects well on the administration, they are fundamentally incapable of making an informed choice as to who to elect into office.

The Obama administration’s campaign to control the media narrative is a two-pronged offensive: On one front, the administration is attempting to persecute whistleblowers who report on the misdeeds of the government, while encouraging the “leaking” of secrets which reflect well on those in power. On the other front, the Obama administration has attacked journalists by spying on their communications and even trying to label them as criminals for doing their jobs. When combined, these two efforts create a very dangerous attempt to structurally alter the press into an entity that is little more than a mouthpiece for disseminating government propaganda.

The Obama administration has attempted several extremely chilling policies that amount to criminalizing the very act of reporting on the government. Of these anti-press policies, the secret surveillance of the AP’s phone lines and the legal arguments surrounding the surveillance and near-indictment of reporter James Rosen are the two most worrying.

In the early months of 2013, the US government secretly obtained the private and work phone records of numerous Associated Press reporters, including the main line of the reporters for the House of Representatives. This surveillance did not allow the DOJ to actually listen in upon conversations, but it did allow them to see who was talking to the media.

The idea that the DOJ may try to compel source lists from a media outlet is actually pretty common, but the specifics of this case are extremely unusual. Unlike with other situation where the DOJ wants information from a media outlet—where the DOJ takes them to court for the information—the DOJ used a National Security Letter to spy on the AP secretly and without giving them a chance to stop the intrusion. This choice made it impossible for the AP to fight back and allowed the DOJ to spy on the media without having to justify such an intrusion in public.

Once the fact that the AP was spied upon came out, the stated justification for this surveillance was the AP’s supposed leaking of confidential information on a Yemen-based terrorist attack that was stopped by the US government. According to the claims of the government, the AP leaked the fact that the attack was stopped because the CIA had infiltrated the terrorist cell and that this revelation had compromised the source’s usefulness in the future. However, when we actually look at the facts, this justification simply does not hold up under scrutiny. First of all, the AP story never actually mentioned that the attack was stopped by a CIA double agent infiltrating the group. As the AP never leaked the information, the assertion by the DOJ that this leak justifies the surveillance is demonstrably false. Secondly, the AP cooperated with the government and held the story for days when they were asked to by the government—they only published it once they had been informed that it wouldn’t compromise those involved.

If the government can secretly spy upon the phone records of media organizations, then no whistleblower is safe and fewer people will be willing to talk to the media without official sanction. This surveillance by the DOJ has a chilling effect on potential leaks of government misdeeds and serves to stop the media from ever gaining access to scandalous information about those in power.

In addition to spying on media organization, the DOJ has taken the unprecedented step of labeling journalists as criminals/co-conspirators for the act of reporting upon secrets that are leaked to them. As far as we know, the Obama administration has only done this twice—with James Rosen of Fox News and with Julian Assange of WikiLeaks—but that is twice too many times.

In both the cases of Julian Assange and James Rosen, the Department of Justice has attempted to make the legal argument that reporters can be considered con-conspirators to leaks if they encouraged or participated in a leak of classified information. By current law, journalists cannot be charged for printing classified information, regardless of how it was leaked, and this change flies in the face of years of precedent—not even Nixon dared to make this argument. Put plainly, this re-classification is nothing less than an attempt to criminalize the reporting of things that the government finds inconvenient and a direct attack on the 1st Amendment.

If the government can criminalize the reporting of anything that they have deemed classified, they simply need to classify all of their misdeeds in order to convince most journalists not to report their crimes. For obvious reasons, this classification isn’t constitutional and I have no doubt that any case resulting from such a charge would be fought up to the Supreme Court (as of yet, this hasn’t happened because the DOJ simply spied upon Rosen and have yet to have jurisdictional access to Assange).

When combined, these two actions by the Obama administration represent a serious attack on the very idea of the free press. If the government can implement secret surveillance on media outlets to dissuade sources and label journalists as criminals for reporting information, a free press is essentially impossible—information that the government doesn’t like will rarely be leaked and, even if it is, only the bravest journalists will dare report on it.

The Obama administration has enacted an extremely bipolar outlook towards government leaks in recent years: they have gone after people who leak unflattering information with unbelievable aggression, while they have ignored—if not encouraged—those who leak secrets that help them politically. This disparity has the dual purpose of dissuading those who would inform the American people about the possible misdeeds of their country, while helping push a positive narrative about those who are in power.

Over the past 5 years, the Obama administration has utilized the Espionage Act—a WWI era anti-spy law that allows draconian charges to be filed against people who release information to improper sources—six times in order to attack whistleblowers; this use of the Espionage Act is unprecedented, both in who is targeted and how many people have been targeted.

Whistleblowers like Bradley Manning and John Kiriakou, who revealed damning information about the US’s secret misdeeds (civilian killings in the case of Manning and the scope of the torture program in the case of Kiriakou), have been charged under the Espionage Act in a way that was unheard of in the 20th century. Past whistleblowers, like Daniel Ellsberg, who released the Pentagon Papers, were not attacked under the Espionage Act and were even lauded as heroes.

Unfortunately, whistleblowers in the Obama era face draconian prosecution and even risk life in prison. John Kiriakou is currently spending 30 months in prison for “leaking government secrets,” while those who tortured detainees and were revealed by Kiriakou are walking free. Similarly, Bradley Manning is facing life in prison and has been held in torturous conditions, while the soldiers to murder civilians in the videos that he leaked are scott-free.

If the persecution of whistleblowers were not odious enough, the Obama administration has selected only the whistleblowers who leak damaging information for prosecution. During the 2012 election cycle, numerous leaks detailing the “tough” actions of the Obama foreign policy team—including Obama’s decision-making role in the drone kill lists and the USA’s involvement in the STUXNet virus to stall Iran’s nuclear program—were given to the media without any investigation. At best, the administration tacitly approved the leaking of this sensitive information at such a politically opportune time and decided not to go after those who had helped them politically. At worst, the administration itself leaked the classified documents, making them guilty of rank hypocrisy and, if their own rhetoric is to be believed, potential violations of the Espionage Act.

If the government persecutes those who leak or report on classified information that looks bad for them while it encourages those who leak classified information that looks good, then they have simply decided to put politics over morality and the rule of law. Treating politically-motivated leakers better than legitimate whistleblowers is truly scandalous and an action that should be met with condemnation by all who want an accountable government.

When everything has been considered, it is clear that the Obama administration wants to set up a media that only feels free to report on things that reflect well on the administration. Even in the event that some government whistleblower is brave enough to risk treason charges to follow their conscience, the actions by the Obama DOJ are aimed at making it unlikely that they will ever be able to spread their information

When the media reports things that look bad for the administration, they are spied upon and even labeled as potential criminals that, in the future, may face charges. In such an environment, the media is dissuaded from reporting on scandals with the threat of government force and they suddenly become little more than a government controlled media—the government may not be able to force them to say good things about them, but they can make it risky to say anything bad about them.

Media freedom is an issue that transcends partisanship and is one that every American should be worried about. Even if you love what the Obama administration is doing policy-wise, they are setting a dangerous precedent that may be used by future administrations to shut down dissent over policies that you dislike. A free media is vital to protect democracy and the Obama administration/Department of Justice must immediately be brought to task by legislators and citizens alike—they must be stopped and an example must be set that any Attorney General to attack the media will lose their job and any President to sanction such attacks will be opposed, derided, and have their legacy be stained with shame.