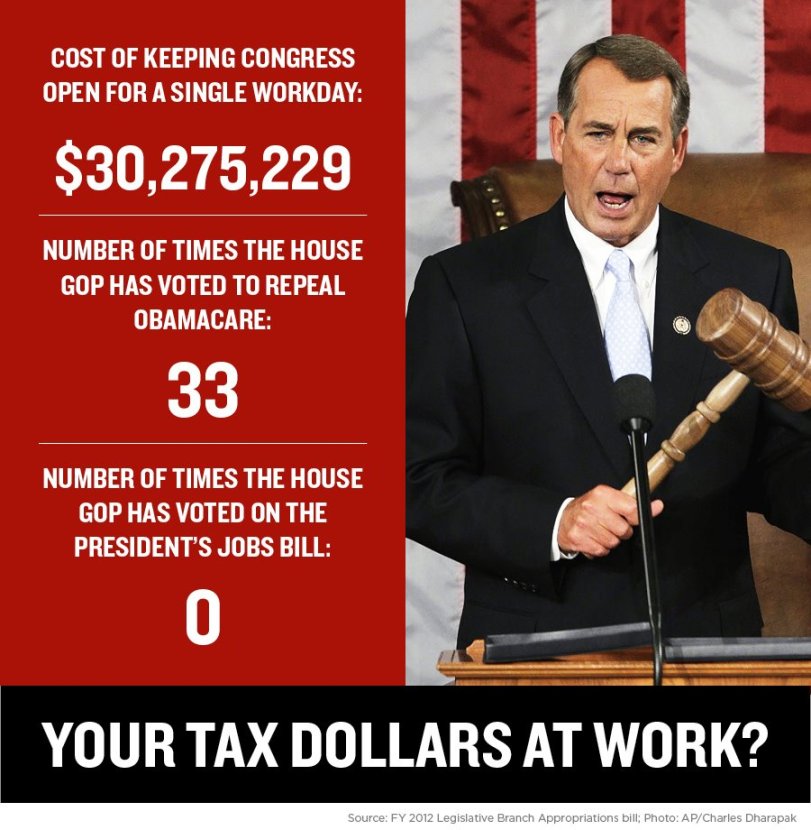 Note: This infographic was made before the GOP attempted their 34th through 37th repeal votes

On June 18th, 2013, the House of Representatives passed an obviously unconstitutional 20-week abortion ban that couldn’t possible become law—it would never pass through the Democratic Senate, would be vetoed by President Obama and, if some miracle led to its passage, it would immediately be struck down in the courts. Such a bill was DOA and indicative of a greater trend of GOP legislators wasting time on partisan protest legislation.

Rather than actually try to pass substantive policy, the Republicans in the legislature have focused the 112th and 113th Congresses upon passing protest legislation in order to stroke their base’s pet obsessions. This focus on partisan protest policy is wasteful, takes up which that could be spent upon real legislation, and degrades the legislature.

Probably the best example of this focus on protest legislation is in the policy area of the Affordable Care Act (ObamaCare). Since the GOP took control over the House in 2010 (2012th Congress), they have attempted to pass legislation repealing the Affordable Care Act 37 times. Such attempts are obviously doomed because there is no way that Obama or the Democrats will let the ACA be repealed, and there is no real policy reason to waste time on such a Quixotic campaign. As even they will admit, there is no real chance for such legislation to result in anything substantive and such votes are pure political theater.

Congressman Rick Mulvaney (R-SC) perfectly described just how political this vote is when he said the following: “If you’re a freshman—the guys who’ve been up here the last year, we can go home and say listen, we voted 36 different times to repeal or replace Obamacare. Tell me what the new guys are supposed to say? We haven’t had a repeal or replace vote this year.”

Put plainly, we don’t pay our politicians in Washington to spend their time making political points and wasting our legislative resources. According to accounting done by CBS Miami, the first 33 ACA repeal bills proposed in the House have took up over 80 hours of our legislature’s time and cost taxpayers over $53.8 million dollars in legislative costs. Some partisan games are always played in the legislature, but the current GOP has let their pursuit of such games crowd out the real policy measures which need to be passed and cost the USA large amounts of money.

In effect, that $53.8 million dollars spent by the Congressional GOP was a subsidy for their political activity—there was no nonpartisan justification for such votes and, in a fair world, the RNC would be picking up the tab.

In addition to wasting money, the GOP’s focus on pointless partisan games have had very real effects on just how much can get done in our federal legislature—there is only so much time that the legislature is in session and time wasted letting GOP members pass the 30th through 37th symbolic votes to defund the ACA cannot be restored. The 80+ hours of legislative floor-time spent on the repeals could have been spent on real policy—perhaps solving the employment crisis—rather than the partisan machinations of a political party.

Elected representatives have the right to propose and debate whatever they want once elected, but even the most partisan voter should hold their elected officials accountable for going off on Quixotic campaigns which serve no real purpose. You don’t need to like every law that is in place (ex. the ACA), but letting your legislators waste time and money with no real chance of getting anything done is just stupid—and guess what, demanding that your politicians stay focused on the real policy issues will be just as effective in repealing the laws that you dislike as having them waste time on symbolic votes (your choice is between nothing getting done and important things other than your partisan obsession getting addressed).