In February 2012, a 17 year old African American teenager named Trayvon Martin was shot and killed by a self-styled “neighborhood watch captain” in Florida. George Zimmerman, the shooter, claimed self-defense and is now facing charges of murder. Due to the contentious racial aspects of this case (an unarmed black child was killed and police let the shooter walk away from the scene) and the controversies surrounding Zimmerman’s self-defense assertions, this case has become very well known.

From the furor surrounding the Martin shooting, one may assume that it was an isolated and unusual tragedy. Unfortunately, this is not the case, as the United States is in the middle of a gun-murder epidemic which particularly affects racial minority Americans.

Regardless of what anybody may say otherwise, the USA still is a country with issues surrounding race and this has led to a situation where black men are sometimes seen as a threat that must be “defended” against with lethal force.

In fact, Jordan Russell Davis—another 17 year old African American Floridian—was shot in another virtually identical “self-defense” case in November 2012. The perfect storm of easy access to weapons, legal excuses for murderers, and racially-justified motives for murder is very dangerous and something that poses a significant danger to many Americans—particularly young black males.

Anybody to follow the news knows a little about the Martin case and the events of that tragic night. This article is not going to focus on debating the facts of that night—that is for the courts and jury to look at now—but is going to describe how the underlying issue of “white privilege” has permeated every aspect of this tragedy. I am doing this because, in addition to being a terrible tragedy, the Trayvon Martin shooting, investigation and media response illustrate many model examples of different types of “white privilege” that many simply may not pick up on.

Before giving a more detailed explanation as to how the Trayvon Martin shooting illustrates white privilege, here is a concise definition of what constitutes “white privilege:”

The Killing of Trayvon Martin

At its core, the Trayvon Martin shooting itself is a perfect example of how latent bias (in an optimistic light for Zimmerman) can have terrible results. This latent bias is the core of the problem of white privilege, as white individuals do not face the negative latent biases which follow African Americans.

Zimmerman’s profiling of Martin as a potentially criminal was what precipitated the conflict which led to the shooting. Even if one doesn’t believe that there is enough evidence to accuse Zimmerman of overt racism, it is entirely fair to argue that his latent bias is that black males are predisposed towards criminality. Before the Martin shooting, Zimmerman had made numerous calls to the police about “suspicious individuals” in his gated community—all of these individuals were African American males and none of them led to arrests of people committing crimes.

On the night of the shooting, Zimmerman made a decision to follow Martin with a loaded weapon because he saw him as being suspicious. As the only things that Zimmerman could possibly have known about Martin were what he observed at the convenience store—that he was black, young, male, wearing a hoodie, and out late at night in a predominately white neighborhood—this indicates that Zimmerman likely profiled him. It could be that any young man would have piqued Zimmerman’s suspicions, but his past history of suspecting innocent black males of committing crimes, simply for existing in his neighborhood, suggests that this profiling was racial rather than ageist.

White privilege includes the ability of white male teens to walk down the street, wearing whatever they choose, without being immediately judged as a threat. Unlike black or Hispanic children of the same age and economic class, white teenagers are not assumed to be dangerous and are much less likely to be stopped and harassed by police/wannabe vigilantes. This type of bias is pervasive and is the exact same type of bias which has led to millions of racial minority Americans being stopped for no reason during “stop and frisks” in New York city.

The Police’s Treatment of the Victim and Shooter

The police’s responses to the Zimmerman shooting illustrate several different types of white privilege. Put simply, the police responded to the shooting differently because the victim was a black male than they would have if he were white—never mind if it were a black man who shot a white teenage girl.

Imagine if the situation were reversed and this shooting happened in a poor, majority black/Hispanic neighborhood: an unarmed, young white teenager goes to the store to get skittles and an iced tea one day, only to be followed, harassed and shot by a black man because he thought that the kid was up to no good. I don’t think that anybody could reasonably claim that the police would have let the black shooter leave the scene with the weapon and evade prosecution for months, solely upon the claim that he was defending himself from the unarmed white kid—in fact, I looked and couldn’t find a single national case that resembles this one. 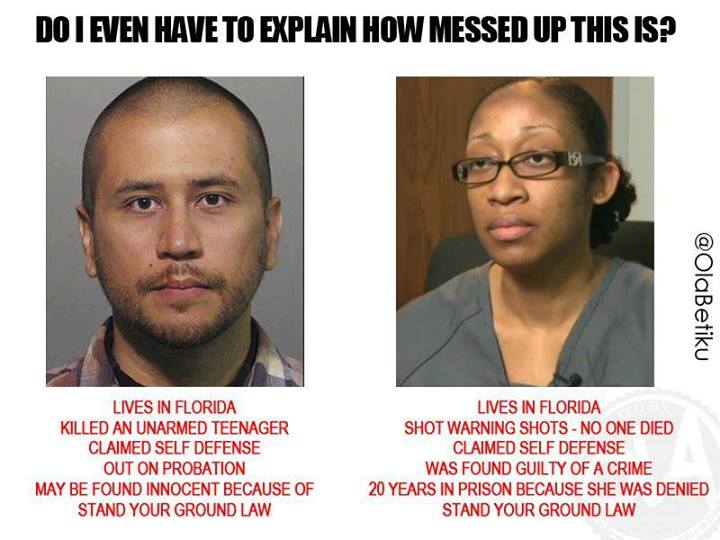 When the police arrived at the scene of the Martin shooting, they found a grown man standing over the body of an unarmed dead teenager, with a smoking gun. By the end of the night, that man was wandering unescorted through the police station, while the victim was in the morgue.

In the immediate aftermath of the shooting, the police held Zimmerman for questioning but they did not do a drug test or gunshot residue test on him—as is standard procedure after a shooting (even if the shooter is a police officer). Due to the time elapsed after the shooting, it was made impossible to determine whether Zimmerman was intoxicated when he shot Martin. In contrast with this oversight, the police ran a criminal background check and drug test on Martin, the victim.

To further compound the tragedy of how Martin was treated, the police made no effort to contact the Martin family with his cell phone, nor did they answer the phone when his family called. The police left Martin in the morgue for three days before his family was notified of his murder.

If a black man had shot a white kid, does anybody think that the police would have acted this way in regard to the shooter and the victim? No, Zimmerman (if black) would have been arrested, drug tested, and background checked while Martin would have been identified through his phone and his family identified.

The Media’s Characterization of Trayvon Martin

White priveledge is not always expressed through overt bias and can often consist simply of people making assumptions based upon race. In the Trayvon Martin story’s media coverage, we see many examples of this type of passive bias that would not even enter the discussion if the victim were white. While discussing the Trayvon Martin shooting, the media has naturally looked into the backgrounds of the shooter and the victim. During these conversations, the media has made numerous unfortunate choices in reporting which perfectly illustrate white privilege.

Classifying Martin as a “Thug”

A white person is far less likely to be labeled a “thug” than a black person and suffer the stigma that accompanies the label. As with many other coded words (ex. “welfare queen”), the term thug is usually only applied to black people, thus creating an imbalance in how white and black people are seen by those unaware of this disparity.

Throughout the discussions of the Zimmerman trial in the media and the public, numerous individuals have classified Martin as a “thug” based upon little more than assertions and the occasional social media post. The use of the term “thug” to refer to Martin is racially charged and is completely unfair given the situation—Martin was the victim of a shooting and had no record of violence.

As far as I can tell, the assertion that Martin was a thug comes from the fact that he was a young black male who may have smoked pot and gotten suspended from school (for smoking pot). If the only requirement for the “thug” status is for a person to have gotten suspended for smoking pot then it has ceased to have any meaningful definition (under this requirement, half the kids in Orange County are “thugs”). When we take into account the ubiquitousness of the pot usage among youth, we are left with the unfortunate conclusion that “thug” is nothing more than a shorthand for white people to use when referring to young black males, regardless of their histories.

In addition to the pot usage, I have found several people who say that Trayvon was a “thug” for posting profane language in his social media and sharing a photo of a gun. Put plainly, this is ridiculous and EVERY kid uses bad language on their social media. And, as to the gun pictures, the idea that posting pictures of guns constitutes a thug is absurd, because it would make half the Republican Party “thugs.” In fact, if bad language and gun fetishism are requirements for “thug” status, then Republican-darling Ted Nugent is probably the largest thug around.

The idea that the black kid with the iced tea and skittles is a thug for getting suspended for smoking pot and posting foul language online, while the white man with a history of violence and a loaded gun is not, is indicative of a gigantic level of white privilege.

In the face of people discussing whether or not Martin’s history or personal characteristics made him be “asking for it” when he was shot, relatively few have looked at Zimmerman’s history with the same vigor. This is a manifestation of white privilege because it shows how white people are able to escape the stigma of bad things in their history while black people tend to have the bad things in their histories magnified.

While Martin was suspended for pot paraphernalia he had no run-ins with the law. In contrast with Martin’s clean record, Zimmerman was arrested for assaulting a police officer and had been accused of spousal battery by his ex. It is true that Zimmerman was never convicted of any crime (having a judge for a father certainly has benefits) but, given the discussions over Martin’s school record, it is entirely proper to look at Zimmerman’s brushes with the law.

The fact that the media focused upon Martin’s school history as a contributing factor to the shooting while they virtually ignored Zimmerman’s history of violence gives us a perfect example of this type of white privilege.

This article will be concluded in a post on July 10th, at 10AM.