This is Part 2 of an article. The fist part can be read at the following link: https://theprogressivecynic.com/2013/07/09/white-privilege-and-the-trayvon-martin-shooting-part-1/

Attacking Martin’s right to be in the community

Several people—including both media commentators and prospective jury members—have expressed the sentiment that Martin could have avoided being shot if he wasn’t walking around that neighborhood at night. Put plainly, the assertion that Martin is to blame for his shooting because his presence in the neighborhood is somehow improper is nothing short of racism.

Martin was visiting his father—a resident of the community—and had every right to be walking down the street at any time of the day. Any assertion to the contrary is simply an example of a person trying to find a slightly more tactful way of saying: “How dare that scary black guy invade our white gated community.”

If Martin were white, nobody would be questioning his right to walk down the street in the predominantly white neighborhood and this method of blaming the victim wouldn’t even be considered. The fact that a white person doesn’t have to worry about being defamed in this way after being the victim of a crime while a black person does is a prime example of white privilege.

In the aftermath of the Martin shooting, there was a massive debate over the role of Martin’s hooded sweatshirt—on one side of the debate, people said that the hoodie was to blame for the shooting while, on the other, people claimed that the apparel of the victim should be irrelevant.

Ultimately, I see both sides of this debate as partially correct; the hoodie probably did play a role in the shooting but that is nothing more than a concrete example of white privilege and should do nothing to mitigate Zimmerman’s accountability.

A black male must be very careful what they wear in some areas, lest they be harassed by police or overzealous neighborhood watch (both of which have occasionally shot black kids who were doing nothing wrong). White males don’t usually need to deal with this type of concern, simply because they are not subject to the same assumptions of criminality that black males are. It is certainly possible that they will be seen as threatening by some, but, for the most part, a white kid isn’t going to have to worry about being profiled when he wears a hoodie out for a jog.

That said, this bias is not an excuse for murder and the fact that somebody is susceptible to this type of bias should do nothing to mitigate the consequences of violence stemming from this bias. 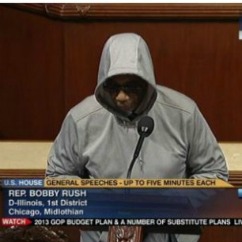 It is important to note that this debate is extremely similar to the gender discrimination which comes after many rape cases. Just as black men are sometimes persecuted for being seen as scary due to their apparel, women are victimized for being seen as “sluts” for wearing revealing clothing. Neither type of bias should be acceptable and nobody should ever be able to evade responsibility for their actions based upon what their victim was wearing.

According to Fox News contributor Harry Houck, “Trayvon Martin would be alive today, okay, if he didn’t have a street attitude.”

While this comment is the individual opinion of a single media contributor, I see it as a great summery of the previous types of white privilege mentioned in this article. The “street attitude” described by Houck is nothing less than a dog-whistle for Martin’s entire identity as a black teenager, and Houck’s statement is indicative of many white peoples’ latent biases.

Put plainly, many white people see any black teenager who doesn’t look and act like Urkel from the TV show Family Matters to be an inherent threat to their safety. It is this latent bias which causes any perceived legal wrongdoing, after-dark activity, or “improper” clothing choice to been seen as far more significant in black males than in white males—white kids are not scrutinized to the same degree as black kids because this initial kernel of bias is not present.

The terms “street” and “urban” are used by white people to describe this unease in a way which isn’t immediately seen as unacceptable. Such dog-whistle terms are mere semantic games however, and do nothing to mitigate the terrible and tragic effects of such biases when they are combined with firearms.

The Trayvon Martin shooting is a perfect storm of white privilege which resulted in tragedy and the posthumous slandering of a victim; from the night of the shooting—when Zimmerman first profiled Martin—to the latent biases of from the coverage of the trial, the Martin case has been a succession of examples of white privilege.

As the Trayvon Martin story concludes with the trial of George Zimmerman, we, as a society, need to realize that we cannot let the issues illuminated by this case disappear with the acquittal or conviction of Zimmerman. White privilege is not limited to this case, and we must recognize how it affected the Martin shooting so that we can avoid future tragedies.