Read the first half here:  https://theprogressivecynic.com/2013/08/14/mission-creep-in-the-nsas-surveillance-and-dea-evidence-laundering/

While the NSA would have us believe that their extra-constitutional collection of information is excusable because it is necessary for the purpose of national security, it appears that they have used their surveillance network for at least one non-security project. This expansion of the NSA’s program to a non-security application is a perfect example of ‘mission creep” and a major blow to the claim by the government that they should be allowed to infringe upon our privacy in the name of security.

As I previously mentioned, numerous federal agencies would love to get their hands on the NSA’s trove of digital information; given the available evidence, it appears that at least one such agency—the Drug Enforcement Agency—has been given some access to the NSA’s information.

According to reporting by Reuters, a special division within the DEA called the “Special Operations Division” has been given access to NSA data on Americans. This division uses their access to the NSA’s data bank to help them make drug cases which would otherwise be impossible to make. None of these cases involve terrorism or are matters of national security—they are merely standard drug cases.

Put plainly, the Special Operations Division of the DEA side-steps the 4th Amendment by piggy-backing their operations on a secret intelligence program. They gain access to illegally-obtained information which they could never get a legitimate warrant for, then build their case backwards in a way which look legitimate.

Through a legally and constitutionally questionable process called “parallel construction,” federal law enforcement conceals the source of their information once the case goes to trial. Rather than admit that the information was hoovered by the NSA and passed on, the DEA takes what it receives from the NSA and reverse-engineers it in a way which looks legitimate. 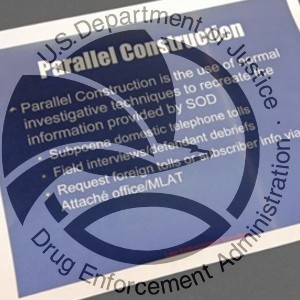 Here is an example of this process: An NSA wiretap discovers that somebody is planning on moving drugs in a truck and they pass this on to the DEA. Once the DEA locates the truck which is being used to carry the drugs, they compel the local police to find a reason to stop the truck (ex. a broken tail-light) with the expectation that the truck will be searched for drugs. Once the truck is searched and the driver is arrested, the official party line of law enforcement becomes simply that the truck was stopped randomly, thus concealing the fact that the police used illegally-obtained information to know exactly where to look.

The process of parallel construction misleads everybody involved with trials, including the prosecutors, defense attorneys and judges. This lack of transparency in the sources of information during investigations is a violation of the 6th Amendment right of a defendant to confront their accusers. 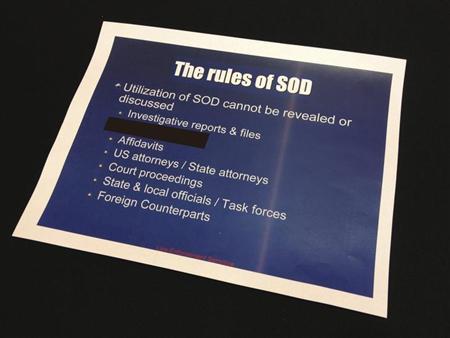 In addition to this program’s violation of the 6th Amendment, the seizure of information by the NSA in the first place is certainly a 4th Amendment violation and the process of parallel construction is arguably a 5th Amendment violation (if the grand jury is misled into handing down an indictment). When we take all of these violations as a whole, we are left at the conclusion that they entire DEA program is terribly unconstitutional.

Legal experts have been shocked about this use of NSA data by the DEA. Nancy Gertner—a professor of Law at Harvard—had the following to say about this program when interviewed by Reuters: “I have never heard of anything like this at all; it is one thing to create special rules for national security. Ordinary crime is entirely different. It sounds like they are phonying up investigations.”

I could not agree more with Gertner. Once you remove the veil of national security from these programs, you are left with federal agencies illegally collecting information on Americans and “phonying up” a paper trail in order to trick people into thinking that they got the information legitimately. At best, this is an example of a law enforcement agency letting their zealous pursuit of lawbreakers overshadow their constitutional limitations; at worst, this is an example of a spying apparatus gone amok, only to metastasize and corrupt an entire division of a federal law enforcement agency.