In the course of my political writing, I often end up deriding stupid politicians and explaining why certain right wing policies are wrong. This may be necessary in order to inform people as to the newest incoming political disaster, but it is only half of the picture.

If we can learn one thing from the current woes of the right wing, it is that a political party cannot sustain itself for long on a purely negative policy platform—you can only push to dismantle the opposition’s plans so long before you must describe your alternative vision of the country.

As such, this article will focus upon my ideal progressive policy platform. I break down my policy platform into seven categories, each with their own sub-sections. While most of these policy goals could be achieved in any order, the first one must be the reform of the system in order to drain money out, reduce corruption, and set the framework for future reform:

I.            Good Governance – Preserving democracy and the responsiveness of the government

Campaign Finance Reform: In order to prevent politicians from being bought by those with money and to ensure the integrity of our government, we must pass a constitutional amendment banning money from politics. This amendment should institute publically funded elections, where small-donors (ex. less than $100) donate to politicians and the government matches these funds for politicians who receive a certain level of support. In addition to matching funds, government-sponsored airtime will be provided to candidates who receive this high level of support for them to run their advertising. No corporations would be allowed to donate to politics and any attempts to violate either the corporate donation ban or give large-sums of money to politicians would be prosecuted under felony bribery statutes.

In this issue, I support the efforts of Wolf-PAC and suggest following the Wolf-PAC plan to achieve this constitutional amendment: http://www.wolf-pac.com/the_plan

Election Reform: To promote a more full and representative democracy, American elections should be as inclusive and accessible as possible. Early voting, same-day voter registration, and absentee voting programs should be expanded. Election Day should be a federal holiday (as it is in many western democracies) and enough polling places should be open that waiting times do not exceed a reasonable length of time (ex. no more than 2 hours from walking in the door to leaving) and getting to polling places is not an undue burden. In addition to making voting easier, discriminatory voter restrictions (ex. photo ID laws) should be banned on the federal level.

Close the Revolving Door: In order to stop the corruption which comes from the revolving door between industry and government (regulators and politicians leaving public service to work for the people who they previously regulated and vice versa), there should be a multi-year ban on regulators, politicians and staffers working for any industry which they previously had power over (ex. no politician on the financial services committee could leave office and become a highly paid “consultant” for the banks). This ban will stop the implicit corruption which comes from people in the public sector being tasked with regulating and passing legislation concerning their future bosses in the private sector. 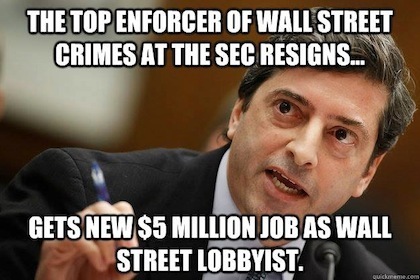 Reinstitute Glass-Steagall: In order to prevent the next banking crash, a new Glass-Steagall Act—separating investment banks from commercial banks—needs to be passed. Before it was repealed in the 90s, Glass-Steagall prevented investment banks from using commercial depositors’ money to back up their financial speculation. Unfortunately, once Glass-Steagall was repealed, banks began speculating for a private profit while using depositors’ money as collateral for the bet (imagine going into a casino and using somebody else’s money to gamble). In addition to this, banks started using assets of the bank in order to manipulate the commodity market for a profit (manipulating the speculative price of Al by using bank-owned warehouses to control Al supply).

Re-Regulate Commodities and Derivatives: To compound the problem of banks using depositor money to back up bets, many of the major banks have leveraged this money to make insane and exorbitant bets—after all, it isn’t really their money that they are risking and, if they win a long-shot, they can make a massive profit. The current system is the equivalent to letting gamblers on horse-races regularly make 50/1 bets with public funds, and be allowed to keep their winnings in the off-chance that their bet pays off. I support a dramatic reforms in regulations on commodity trading and derivative betting, in line with what experts like Paul Krugman and Elizabeth Warren have proposed—put simply, I am not an expert and would leave the specifics of such policy to those with a track record of success (IE. Not Larry Summers). These reforms would probably include, but are not limited to, the cessation of privatized gains/socialized losses, limiting the amount of leveraging which is allowed (ex. you aren’t allowed to bet 40X more money than you have access to), and the reigning in of “shadow banking” (using tricks and intermediaries which don’t show up on official banking balance sheets to inflate profits).

Institute Strong Environmental Regulations: For far too long, the United States has let “industry experts” from environmentally destructive interests, corrupted regulators (See “Close the Revolving Door”), or even industries themselves decide what our country’s environmental regulations should be. The United States must take a leadership role in mitigating climate change (it is essentially impossible to stop), developing new green energy technologies, and working to ensure that the earth remains a habitable place. In order to do this, the USA must use science rather than selfish and short-sighted economic math to determine what constitutes good environmental regulations—for example: we must stop building the Keystone XL pipeline, regulate fracking, enforce strict carbon caps on industry, tax polluters, and invest money in sustainable energy research.

Make the Tax System More Progressive: Currently, wealthy individuals and corporations pay far too little in taxes. A combination of tax breaks (written into law by lobbyist-paid politicians) and tax-evading tricks (ex. offshoring, the capital gains loophole, etc.) have allowed the wealthy to have a record low EFFECTIVE tax rate, while hiding behind their BASE tax rates—in fact, some wealthy people pay no taxes or even get money back from the government. We must rebalance the tax code and eliminate legalized tax evasion if we want to return to a fair society. Here are a few ways that we can advance this goal:

Stop Corporate Tax Dodging: Corporations in the USA have a very high base taxation rate, but they pay a criminally low effective tax rate. In many cases, huge corporations (ex. General Electric) actually get tax rebates because they pay a net NEGATIVE tax rate. Put simply, this must be stopped. The corporate tax code must be reformed in order to eliminate unfair deductions (ex. tax breaks on corporate jets, tax breaks for outsourcing, etc.) and ensure that all corporations are paying a significant amount in taxes. In addition to ensuring that corporations are expected to pay their fair share, we must close loopholes that allow corporations to stash their cash overseas in order to avoid paying taxes—all corporate taxes should be levied at time of profit, not when a corporation decides to bring its profits home.

Due to its size, this article has been split into two parts. The second p will be released at 10:00AM on Tuesday, August 27th.

2 thoughts on “A Seven Point Progressive Policy Agenda: Part I”