American politics is based around a representative democracy, thus has always relied upon elected representatives in Washington to function. This reliance upon representative officials—rather than a pure democracy where everybody votes on policy—is efficient, but it does have the flaw that a single extremist official can cause extreme problems, both abroad and domestically.

Ideally, each voting district picks the best it has to offer and sends them to a position of power… but, as in most things, the ideal is not the reality and oftentimes politicians are simply the most convincing liar on the stage. Politicians are imperfect, fallible, and sometimes even crazy, extreme or stupid—in many cases, they also reflect the flaws of the voters (ignorance, racism, religious extremism, etc.).

In spite of the inevitability of flawed politicians, a safeguard against extremism in policy results in the fact that a majority rules in the legislature. Unless a majority shares the same flaws (ex. racism in the 19th century), policies are less likely to be extreme than the radical suggestions of a single politician.

Unfortunately, the extremism and stupidity of certain politicians can have numerous consequences, in spite of the fact that they are unable to pass policy into law. In modern years, this has been a severe problem in American politics, as the right wing has sent a variety of extreme, bigoted, ignorant and flat-out stupid politicians to Washington as their representatives. 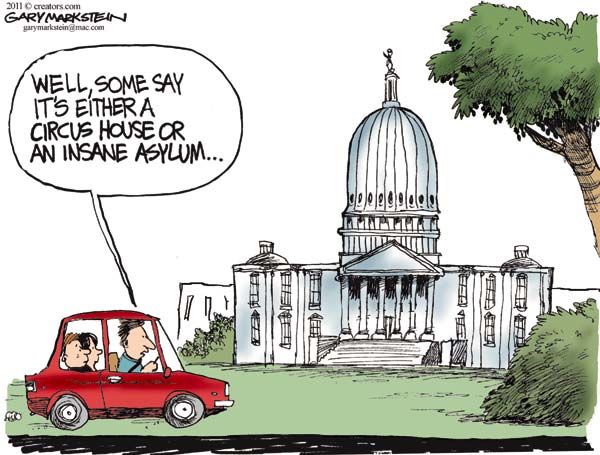 While extremism is not limited to one political party or ideology, the modern right wing is unusually vocal and extreme. Significant portions of the right wing not only believe in a variety of insane and ignorant things, but are engaged in loudly describing their opinions. Here are only a few examples of such right wing falsehoods:

We see examples of how this problem has real-life consequences in Egypt, where the flaws and mistakes of individual politicians have become an extreme problem for our relationship with the country. These problems are numerous and have worsened an already terrible situations playing out with the ousting of Morsi:

In order to attack Obama, the right wing has latched onto the ridiculous idea that Obama is a supporter of the Muslim Brotherhood; many on the right have loudly proclaimed that the Obama administration is infiltrated by the Muslim Brotherhood and that we are supporting pro-sharia terrorists. This careless and false political attack has led many in the Egyptian people to assume that the Obama administration is in support of Morsi.

In fact, videos of Louie Gohmert (R-TX)—one of the stupidest and most extreme right wingers in congress today (an impressive feat)—where he equates the Morsi Administration with terrorists, are now are currently being used by the Egyptian military to propagandize against the Muslim Brotherhood.

To further complicate the Egyptian situation, John McCain and several neo-conservatives went to Egypt on a diplomatic trip. This trip resulted in disaster when McCain publically described the Egyptian military’s ousting of Morsi as a coup (an accurate, but undiplomatic, term), thus scuttling the emerging peace deal between the pro-Morsi protesters and the military. This deal—which would have traded the release of key Muslim Brotherhood personnel from prison for a decrease in the overall size of the protests—was helping keep the peace and could have resulted in the protests/responses not escalating to the point that they did. The destruction of this deal, combined with the continuation of aid to the Egypt military, angered the supporters of the Muslim Brotherhood. 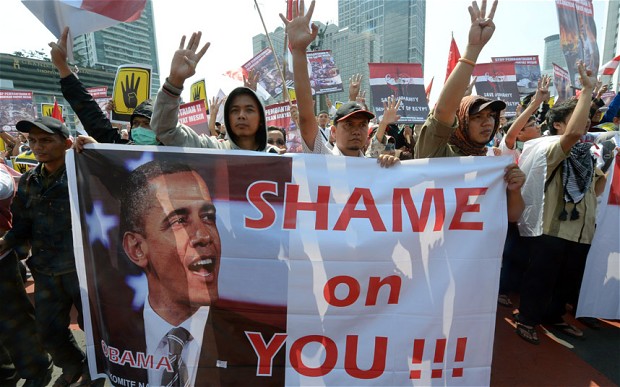 The pro-Morsi protesters are angry about the destruction of the peace deal and the continuation of aid to Egypt despite the fact that our politicians admit that the military committed a coup, while the anti-Morsi Egyptians are angry that President Obama is apparently a friend of the Muslim Brotherhood. Both sides of the Egyptian unrest have latched onto individual American politicians’ words against their position, leading everybody to dislike the USA more. Whichever side wins now, it is highly likely that we will be remembered as the supporters of the losers.

It is very difficult to inoculate people against the ravings of these extreme politicians, and virtually impossible to ensure that our federal legislature is free of insane, stupid or extreme politicians. That said, we need to try to make it clear to people across the world that we are a democracy which often has a small number of politicians who are absolutely disconnected with reality.

While we must tolerate extremists if they are elected, that doesn’t mean that anybody who is not their constituent should listen to them and take their words seriously. People in other countries need to understand that outlier politicians do not represent the average American and that they should react to these extremists and fools in the same way that many sane Americans do—derision, sarcasm, and, when all else fails, just ignoring them.

One thought on “How Individual Radical Politicians Cause Real Problems”