White Privilege and the 2nd Amendment

The gun-murder epidemic in the United States has provoked a great deal of discussion about the 2nd Amendment and the right to bear arms. On one side of this argument, there is the vast majority who want increased gun control, while, on the other, there is a small, but powerful and vocal, minority of gun extremists.

In the recent fights over gun control and ownership, we have seen many gun-enthusiasts claim that guns are just tools and that the simple act of owning a gun is not threatening in the slightest—in fact, these people claim that virtually everybody should be armed and trained to use guns from an early age. Despite these claims, it is evident to anybody who cares to look that not everybody in the United States is treated equally in regard to gun ownership.

Many assume that the issues surrounding gun control are race-blind, as everybody has access to the same weapons (weapons dealers rarely see any color but green), but these people would be incorrect. Our society’s perception of gun owners who are exercising their “2nd Amendment rights” is often linked to the color of their skin—in this, Americans’ gun rights are extremely different depending upon who is carrying the weapon.

For the most part, white Americans have a level of privilege when carrying their weapons which is simply not given to people of other races. Other white people (who are still the majority) are far less likely to perceive a heavily armed white “good ol boy” to be a threat than if they saw the same weapons being carried by somebody of black, Hispanic or middle eastern descent.

The ugly truth is, the 2nd Amendment may be idolized by many Americans, but a significant portion of these people see it as the exclusive domain of WHITE Americans—if it is a brown hand holding the gun that they see as an absolute right, then they immediately think of terrorists, drug gangs, and “thugs.”

For example: When gatherings of white gun enthusiasts congregate around a business in the south (ex. in Texas), they are usually given the benefit of the doubt and not treated as potential criminal threats. Contrasting this, if a group of black youths wearing baggy clothes or a group of Muslim men wearing headscarves were to hold the same weapons in the same place, it is highly likely that the locals would soil themselves, call the police or feds, and hide in the closet clutching their assault rifles until “help” arrives. 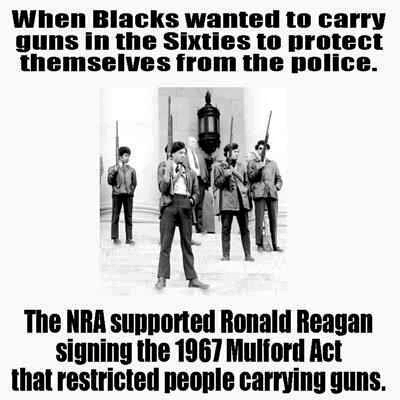 This pro-white bias in regard to gun-ownership is both unfair and highly ironic. It is unfair because, if people claim that gun ownership is a constitutional right, then it would stand to reason that race and dress should be irrelevant to the exercise of that right. It is ironic, simply because a vast majority of random mass-shooters are young, isolated, white men and a vast majority of white victims are killed by white killers (86% in fact).

Racial biases in the perception of gun ownership are not just an abstract societal phenomenon, as they can have very extreme real-life consequences. Studies have shown that Americans who see people as armed threats are more likely to shoot at them if they are not white, and are much faster to make fatal decisions. This perception of armed minorities as threats can lead to their deaths at the hands of paranoid white people who, ironically enough, often support gun ownership.

Unfortunately, this type of bias extends to police officers when they are performing their duties (ex. the killing of Amadou Diallo by the NYPD). In much the same way that African Americans have been stopped for driving while black,” racial minorities have a much harder time “exercising  their 2nd Amendment rights” than white people—they are more likely to be stopped, or even killed during the stop.

This racial bias is not only present in the perception of gun carrying, but also in the youth aspect of gun culture. In some areas of the country, learning to shoot is a rite of passage that many kids goes through, from ages as young a five—in fact, there is even a rifle company called Crickett Firearms which makes rifles that are specifically designed for young children. The ownership and use of weapons by children may be disturbing to many not from that culture (myself included) but, throughout much of the country, the picture below is simply a funny family snapshot for the album (I mean, look at how big that machine pistol, shotgun and assault rifle look in the hands of those kids—isn’t it cute?).

Young white kids who are being trained to use guns are seen as simply American kids learning about their 2nd Amendment rights, while kids of other races are often seen as prospective threats being indoctrinated and trained to commit violence.

For example, here is a picture of another minor holding a powerful weapon: 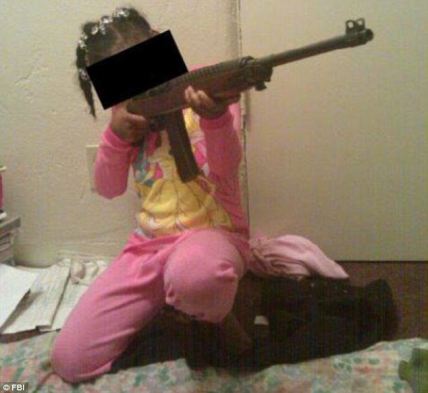 This picture of an African American child holding a gun was found on a social media page by the Los Angelas Police Department. In response to this photo, there was outrage at gang members indoctrinating their children and exposing them to weapons at such an early age.

Bill Scott, an LAPD Commander, made the following comment after seeing this picture, as well as other such pictures from the same raid: “It’s a culture of violence; When you grow up in a culture like that, violence becomes secondary. It becomes second nature. And that’s the cycle we’re trying to disrupt.”

Personally, I find this picture intensely disturbing, but no more so than the one of the white children. In both pictures, children are given access to guns at far too young an age (not that there is a proper age to use an assualt rifle) in a way which glorifies the possession and use of firearms.

I have no doubt that many gun enthusiasts who see these two pictures will classify the white children as cute and harmless, while they will see the black child with a gun as a young “thug” who may one day be a threat—it is this disparity which illustrates the racial privilidge available to white gun owners.

Here is another photo of children with guns: 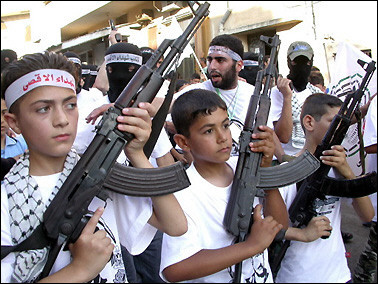 While this photo is of Palestinian youths, not Americans, I would ask people to imagine that a few American Muslims were photographed havin their children hold their guns this way.

Obviously, many white Americans would make snap-judgments, classifying these middle-eastern kids with guns to be the victims of Islamic extremist indoctrination and potential domestic terrorists—this judgment is not based upon the weapons, but upon the fact that the people holding them are not white. It is likely that the parent of these kids would receive a visit from Homeland Security and that Fox News would run a continuous loop of the pictures for weeks.

If we are to believe that gun ownership is a constitutional right, then we cannot say that white people are the only people who are freely able to exercise that right without terrifying their fellow Americans and opening themselves up to danger—such a disparity creates two-tiers of the law and elevates white Americans above all others.

The solution here is not to default to the lowest common denominator (by lowering the reaction of the American public to armed individual to that which is currently enjoyed by white people), but to stop assuming that white people with guns are somehow less dangerous. It is rational to assume that somebody who is carrying non-hunting weapons while not wearing a uniform could be a threat, and the fact that somebody is white should be immaterial. Anybody who is insecure or ill-intentioned enough to constantly feel the need to carry around weapons—whether they are black, white, or even green—should be regarded as equally suspect.

By attaching a social stigma to carrying weapons in public, we can disincentivize people of every race from idolizing weapons; this could help turn the tide against the NRA’s blockage of gun reforms and would do a great deal to reduce accidental gun deaths.

Unfortunately, this situation exists at the nexus of the intensely controversial issue of the American gun obsession and the pervasive issue of white privilege. As such, it is very difficult to combat, but we must not give up if we wish to have any hope of a truly equal society that does not live in constant fear of the next shooting.

90 thoughts on “White Privilege and the 2nd Amendment”