Many of the arguments used by gun-rights absolutists (AKA “gun nuts”) during fights over gun control laws involve the concept of gun ownership as a deterrent to crime. These people argue that they wish to arm themselves in order to not only defend themselves against incoming threats, but to deter potential threats from seeing them as a viable target.

Here are a few examples of such arguments:

“The Navy Yard is a gun-free zone, which is also known as a free-fire zone for bad guys. They always go after soft targets.”

While the stakes are decidedly lower, many anti-gun control arguments are based around a premise similar to that of the Cold War era’s “Mutually Assured Destruction” (MAD).

The theory of mutually assured destruction is an argument for a strategic balance of weapons between state actors that would promote peace—specifically, this was referring to a nuclear balance of power between the United States and the USSR. According to MAD, two rational actors with both first and second strike capabilities (pre-emptive and retaliatory) to destroy their enemy would be unwilling to go to attack one another. In effect, an attack by one entity could destroy its enemy, but such an attack would also result in self-destruction due to the resulting counter-attack.

In order for MAD to function as a deterrent, several requirements must be met:

On the macro-level, MAD involves the ability of nation-states to annihilate one another via nuclear strike but, on the micro-level, it can also be used to describe how individual actors could possibly act in regard to shootings. Because of this connection, we can use the exceptions to the MAD strategic equilibrium in order to debunk the arguments of the gun-rights absolutists.

Put simply, the anti-gun control arguments used to support near-universal gun ownership to function as deterrence to violence may sound superficially valid, but, when we look at specifics, they fail to conform to the requirements which make MAD possible.

In any MAD scenario, a first strike which can completely disable or destroy an enemy while pre-empting a counter-attack is able to short-circuit the strategic equilibrium—they can act with impunity, as they are capable of destroying their adversary without worrying about a second strike.

In many domestic shootings, the first strike functions as a “splendid” strike and results in the victim being unable to initiate a second strike, even if they own weapons. After all, we are humans, not nations with automated and entrenched second-strike weapons, thus there is no real way to ensure a counter-attack if somebody were to start shooting. If a shooter has designated a target and starts shooting, the odds are that, even if that person is armed, they will be incapacitated by the surprise attack, thus unable to defend themselves—it is possible that other entities (ex. the police) will come along later and take the shooter down, but, that is irrelevant in assessing the strategic equilibrium between the two involved actors.

A perfect example of this comes from the first casualty of the Newtown School shooting: Adam Lanza’s mother. Nancy Lanza was a gun-enthusiast who owned numerous weapons and who was trained to use them. Despite this, she was killed by her son, with her own gun, and had no ability to defend herself or initiate a second strike. Killed by a single shot, there was no opportunity for her to fight back or ensure the mutual destruction of her killer, making this event an example of a splendid first strike.

After killing is mother, Adam Lanza went on to initiate dozens more strikes upon people who were unable to defend themselves (due to age, not their lack of weapons) before he was stopped by police.

This failure of MAD represents a real life example of one of the fallacies of applying MAD logic to gun control—humans are far more vulnerable to first strikes than nation-states, thus asserting that an equilibrium of force can be created when everybody is armed is simply not realistic. The aggressor has an incredible advantage while the victims are most often killed until something stops the aggressor from carrying out their offensive (ex. they run out of ammo or need to reload).

It is this requirement for MAD equilibrium which is the reason why nobody wants Iran to get nuclear weapons—they are seen as irrational actors by many, thus are more likely to use their weapons, even in the face of catastrophic retaliation.

Contrasting this, if we are to believe the gun-enthusiasts’’ argument on guns (more weapons and less gun control = safer), then we would naturally assume that an armed Iran would make the world safer. If more weapons equals more peace, then the USA should give nukes to every country, including such places as Iran and Myanmar. Obviously, this is not the case, either on a nation-state or individual level, as irrational actors don’t conform to the requirements of MAD equilibrium.

In many domestic shootings, the shooter is either disturbed or suicidal—looking to go out “in a blaze of glory”—thus assuming that they will be deterred by the threat of a second strike is simply a mistake. Many shooters expect to die and simply want to accrue a high body count before somebody kills them.

Since many shooters are irrational, the application of MAD as deterrent will not stop all shootings. Such deterrent may stop some shooters but those are only the rational and, let’s face it, anybody to contemplate a mass shooting is likely an irrational actor.

In a MAD equilibrium with multiple involved actors, it is important that every actor have the ability to determine which opponent is a threat or has initiated force against them. This is true because, without this information, it is highly likely that a first strike could result in the target initiating a second strike against an entity which did not attack them.

To further describe this type of situation, imagine a multi-actor conflict involving Russia, the USA, and China. If Russia were to launch a strike on the USA and we were unable to determine whether the strike originated from Russia or China, we would face a split-decision between possibly destroying the wrong opponent or being destroyed without retaliating against our destroyer—in this scenario, it is possible that the initiator of the first strike survives and that we retaliate against the opponent which was maintaining an equilibrium (thus also destroying our enemy’s competition with our misplaced second strike).

In shootings where multiple individuals have guns, it is highly likely that a cross-fire could result where nobody knows who the first shooter was. One person fires the first shot, which is met by another person firing at them, setting off a chain reaction where other people fire at the person who they perceive to be the original shooter. In such a shooting, it is likely that the resulting shootout would kill more people than the original shooter could have done so alone, because the number of shooters would be multiplied. 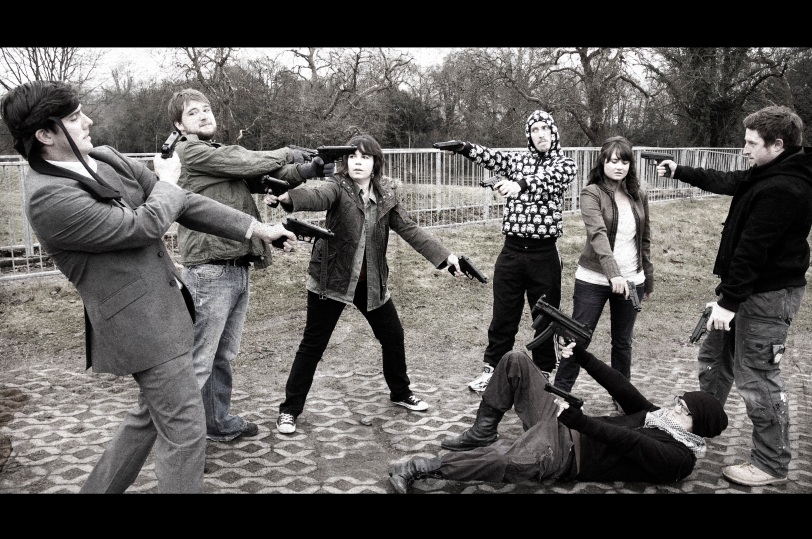 Thus situation is further complicated by the possibility of multiple initial shooters (ex. Columbine had two shooters working in tandem), leading to a massive shootout where nobody knows who is a criminal and who is simply reacting to what they see as a mass-shooter. To make this even worse, the police would likely be unable to determine who the original shooters were once they arrived, thus risking the lives of everybody who is armed in the vicinity of the shooting, criminal or not.

In order for MAD to function, all actors must have the ability to initiate devastating strikes, which presupposes a certain level of economic power. Any entity which is unable to muster the economic resources in order to arm itself becomes subservient to the whims of the entities which have developed the ability to annihilate them without fear of retaliation.

For example: If Iraq had succeeded in getting nuclear weapons during the 1980s (when Israel destroyed their reactor with a preemptive bombing campaign), then there is little chance that the USA would have attempted an invasion in 2003—the risk of an invasion would be too high, as the target would have the ability to defend itself.

The ultimate example of this problem comes from the only wartime use of nuclear weapons. The United States was the first country to develop nukes, thus was able to use them two times against the Japanese (Hiroshima and Nagasaki) without fear of equal retaliation. Because of this, Japan was forced to surrender and was forced to accede to the demands of the United States.

When applied to guns, this problem with MAD creates a situation where self-defense is stratified by economic means. Even if we believe that guns are a deterrent (and, given my points above, this is highly questionable), the unequal access to weapons leads to poorer people being forced into a subservient position to the wealthy—the wealthy can buy assault rifles and establish arsenals, while poor people are unarmed.

This situation is largely harmless in defensive terms, but it creates a psychological effect where the heavily armed assume that they have a primacy of force and are able to use it with impunity. In short, they become like the US during Iraq and are more likely to enter violent conflict with less-wealthy actors because of their perceived superiority in terms of arms. In the domestic sense, this is likely to result in more shootings like the Trayvon Martin one, where well-armed Americans rapidly escalate to lethal force, because they perceive themselves as armed and ready to “defend” themselves.

In totality, we are left with the conclusion that the concept of mutually assured destruction is applicable to gun violence, but no strategic equilibrium is possible. When MAD and peace through armament are applied to domestic gun ownership, the only results are more shootings, and mutual destruction.

This failure of MAD to sustain an equilibrium in regard to gun ownership pretty much annihilates many American gun enthusiasts’ arguments as to why they should be allowed to keep their guns. If the argument that guns are vital to self-defense and crime deterrence are debunked, then gun enthusiasts are left with the fact that their guns purpose is either recreational or as a very dangerous security blanket—neither of these purposes are worth the cost of tens of thousands of gun deaths a year that our country is currently paying.

If everybody is allowed to own powerful weapons, then irrational actors will use them to kill innocent members of the population, imperfect information will cause armed individuals to retaliate against the wrong shooter, and the arrogance of a well-armed entity will cause a rise in “preemptive” self-defense. In short, lots of Americans will die senselessly.

In order to stop this cycle of violence, we need to put more restrictions on powerful weapons, not open up access to everybody in a misguided attempt to create a strategic equilibrium. In effect, we need a mutual disarmament, where we are left with the police holding the primacy of force in regard to firearms. Drain the country of powerful firearms (ex. assault rifles) through banning their sale and using buybacks/confiscations of guns used in crimes, so that irrational or criminal individuals are less able to arm themselves.

Countries like Australia have already figured this type of disarmament out and, as a result, they only experience a fraction of the gun violence that the USA does. It isn’t an easy road, particularly considering the strength of the gun lobby and the sheer number of weapons already out there, but it is the only realistic path to a country which doesn’t experience a mass-shooting every couple months and ten thousand gun murders a year.