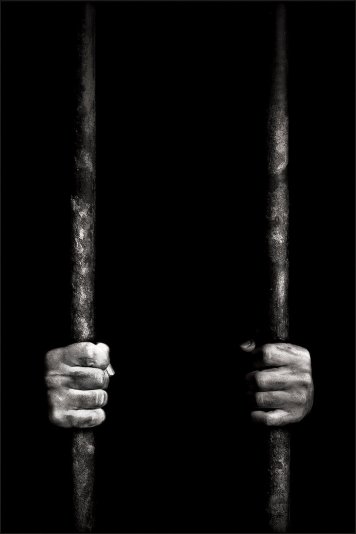 The United States has the dubious distinction of being the country which imprisons a larger percentage of our population than any other country on earth. Out of every 100,000 Americans, 716 are currently in jail—to put this into perspective, here are imprisonment statistics for several countries that have regularly been demonized for their repressive governments:

The United States is not a small country by any means, thus our high incarceration rates translate to truly staggering numbers of people in jail. According to the most recent estimates, nearly 2.2 million Americans are currently serving time in the federal, state and local prison systems—in addition to those who are serving time, approximately 5.8 million Americans are on probation, on parole, or under house arrest.

These statistics about American justice are shocking and indicative of an overly-punitive system which sends far too many people to jail. I have yet to find anybody who argues that crazed killers should be allowed free, but approximately 60% of American prisoners are non-violent, and nearly 25% are non-violent drug addicts; the United States imprisons these people, while the rest of the developed world gives them treatment, rehabilitation and non-incarceration restitution to their community.

Unfortunately, in addition to imprisoning a giant number of people, statistics indicate that the American justice system is manifestly unjust in regard to imprisoning some races more than others.

Anecdotally, most Americans will recognize that racial minorities are disproportionately targeted by law enforcement for scrutiny—the propagation of sayings like “driving while black” (DWB) or “walking while black” (WWB) as reasons for being harassed by law enforcement are demonstrative of this. Unfortunately, few non-minority Americans realize the full extent of the racial disparities in our justice system, nor how this problem is actually growing.

On its face, this disparity in incarceration appears to be incredibly unfair and indicative of a severe societal problem. Black Americans are being incarcerated at rates nearly six times larger than white Americans.

A majority of those arrested will likely be incarcerated for non-violent crimes (probably drugs) and the term behind bars will have several extreme consequences:

Because these, and other, consequences of incarceration are focused on racial minorities, a two-tiered society is created—everybody is given the appearance of equality, but minority Americans have many of their rights stripped from them due to incarceration. Author Michelle Alexander has labeled this trend “the new Jim Crow” and has written a very good book by the same name.

In order to justify these numbers and the perpetuation of this obviously unfair trend in our justice system, some will argue that the police are just arresting criminals and racial minorities just tend to commit more crimes. These people are largely incorrect, as the Sentencing Report study goes further into why the racial disparity exists.

It is true that poorer Americans have a disproportionately high crime rate, both on non-violent and violent crime rates—this holds true with both minority and white Americans, but is concentrated in black communities due to their higher poverty rates. That said, structural and latent biases are a major factor in increasing the numbers of minority Americans who are arrested and incarcerated.

Police officers are more likely to stop African Americans and Hispanic Americans than they are white Americans. This disparity can be subtle, or it can be as overt as the NYC “stop and frisk” program, but it almost always exists. Because minorities are more likely to be stopped by police than whites, more minorities are arrested for non-violent crimes (ex. drug possession), despite the fact that they commit those crimes at rates equal to that of whites.

This pattern is supported by the evidence, including numerous studies. For example, a 2002 study by the ACLU showed that “Blacks delivering drugs downtown [Seattle] are 13.6 times more likely to be arrested than whites engaging in the same behavior in the same geographic area.”

Here are two graphs from the Washington Post which perfectly illustrate the arrest disparity that I am talking about: 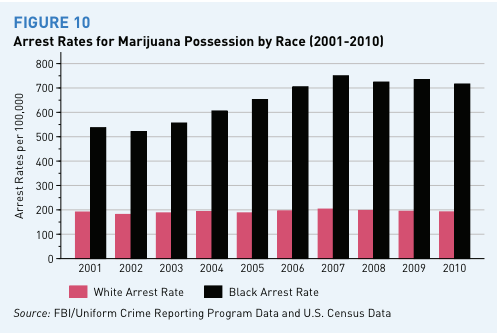 When prosecutors decide how to charge crimes, they tend to seek harsher sentences for minorities than whites. According to the Sentencing Report study, minority Americans were more likely to be charged for death-penalty and drug crimes, while less likely to have the prosecutor waive minimum sentencing requirements after a conviction. This disparity in prosecution based upon race leads to minorities facing harsher charges and longer sentences than whites, for the very same conduct.

Once charges are filed, lawyers are hired and a trial begins. Statistically speaking, minorities are poorer, thus are less-able to afford a good lawyer than the average white American—this leads them to be less-able to defend themselves in court and more likely to be convicted. In many of these cases, plea deals are reached in order to save money and avoid draconian sentences, thus a trail never actually occurs.

If a criminal case leads to a trial, minority Americans are more likely to be convicted than whites. This disparity is because of latent biases held by the jury that predispose them to see blacks and Hispanics as guilty more often than whites. While studies have long shown this bias, there is little that can be done to combat its effects—latent bias is unconscious and most people who have it don’t present as overtly racist.

From arrest to trial, the deck is stacked against minorities in a way that it is not for whites. This isn’t to say that the criminal justice system is a comfortable place for white Americans to find themselves (remember that all imprisonment rates are high in the USA), but simply that it is a far worse place for non-white Americans.

Millions of Americans are being crushed by our criminal “justice” system and justice is not being served. If everybody were being treated equally in our draconian system, it would still be unsustainable at these levels of incarceration; the fact that our current system is filled with race-based biases compounds its injustice and turns this draconian system into a travesty of justice.

We need to start looking at our justice system and finding ways to decrease overall incarceration while eliminating the structural biases that lead to racial persecution. Unless we can do this, our “justice” system doesn’t deserve to have the word justice in its name without quotations and we will all live in fear of the time when we may be behind bars.

One thought on “Racism, Mass Incarceration, and the United States “Justice” System”