Partisan Differences in the Definition of “Big Government”

In American politics, the term “big government” is used by politicians in order to marginalize the policies of their opposition. Both Democrats and Republicans label opposition policies as big government in order to capitalize upon the negative public opinion which is attached to the label—that said, the Republicans have taken the use of this label at a frequency which has never been seen on the left wing. 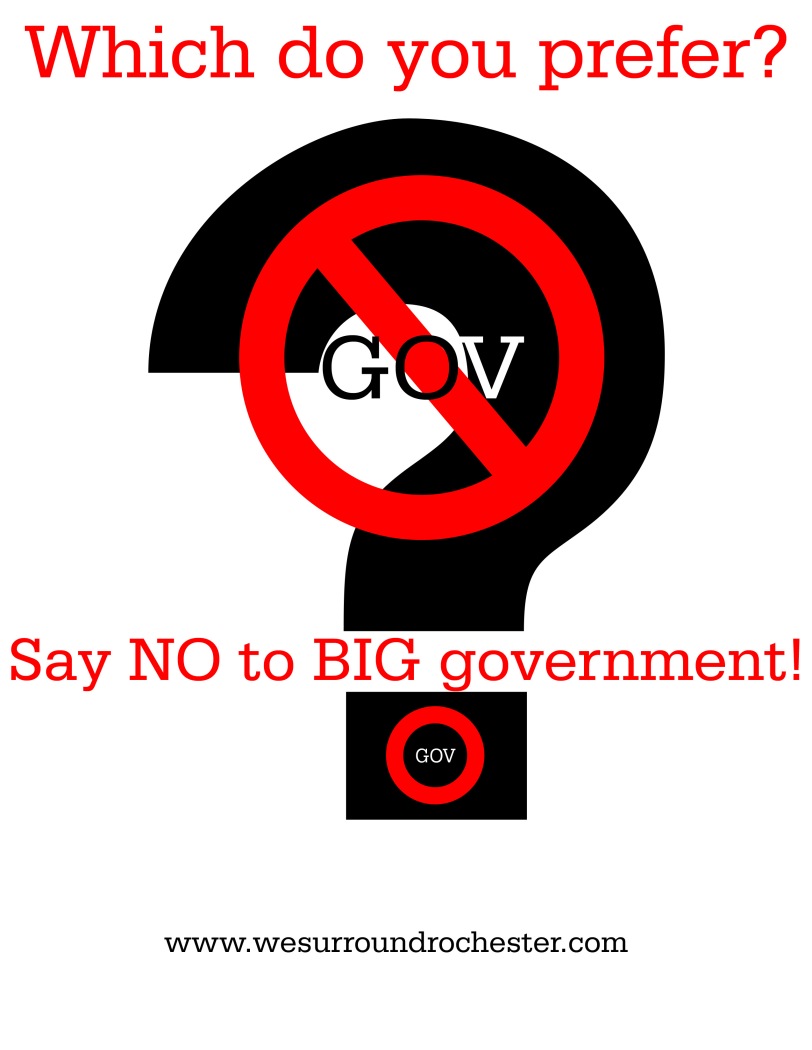 Here are examples of such uses ofthe term “big government” as an aspersion:

“For those who aspire to live in a high cost, high tax, big government place, our nation and the world offers plenty of options. Vermont, Canada and Venezuela all offer you the opportunity to live in the socialist, big government paradise you long for.”

“This year, Virginia Delegate “watch your mouth” Bob Marshall is
championing a really, really, really, really big government conservative
cause. It`s an anti-abortion, anti-birth control personhood bill that
would define a person under essentially the entire code of Virginia state
law as beginning at the moment of conception.” 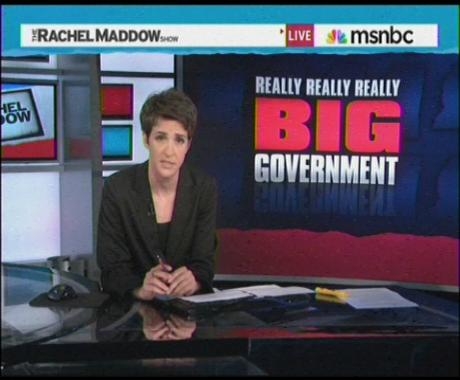 Despite the ubiquitous use of the term “big government,” there is no concrete definition of what separates a “big government” from a “small government;” the label is entirely subjective and, in most cases (not in cases of anarchism and communism/fascism), just a statement of opinion. In effect, any commentary on the size of government is not empirical, but rather a relative assessment of government size based upon the ideal government size of the person talking.

In addition to being subjective, the size of government is not necessarily consistent across the entirety of the institution—a government can be relatively minimalist in one policy area, while extremely expansive in another.

For example: the United States has a military which spends more than the GDP of smaller countries but has a relatively weak social safety net. On the other hand, the Scandinavian countries have a very strong social safety net but comparably little defense spending. 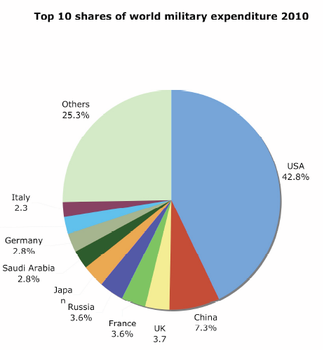 Which government is “big:” Is it the United States for its huge defense spending and large overall size of the federal government (many offices, workers, and departments) or, is it the Scandinavian countries which have a very robust social safety net for every citizen? 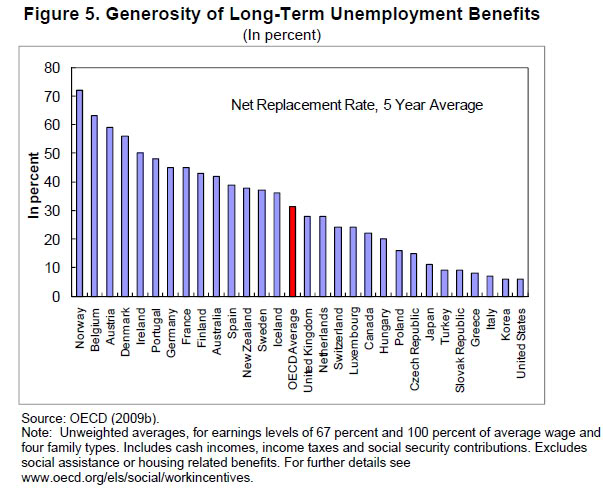 Big government according to the current mainstream GOP: 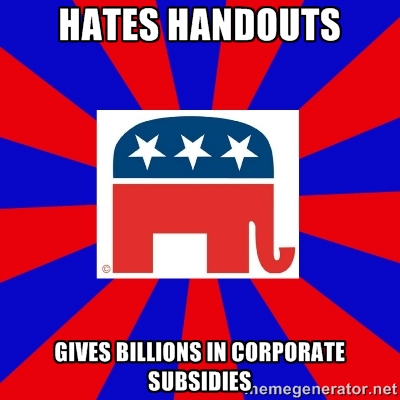 Not “big” government according to the current mainstream GOP: 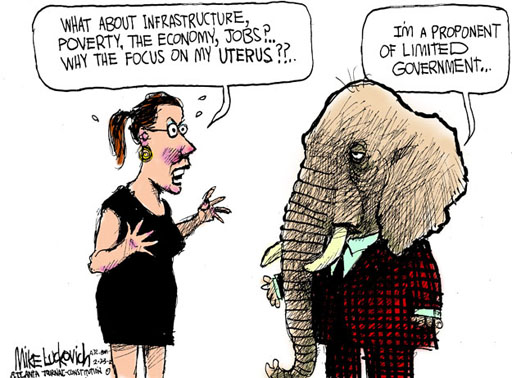 The definition of what constitutes “big government” overreach held by the GOP is a composite of the various factions which make up the party.

Pro-corporate Republicans focus their definition of “big government” upon programs which regulate big-business and necessitate higher taxes—they see most attempts by the federal government to reign in business (ex. the FDA and EPA) and redistribute wealth from the wealthy to the needy as intrusive “big” government, if not tyranny. Despite this dislike of social spending and taxation, these Republicans support high levels of corporate welfare (ex. oil subsidies, tax incentives, etc.) and military spending.

Religious-right Republicans focus upon social issues rather than economic issues when defining big government; for the most part, these Republicans see attempts by the federal government to preventing religion from infiltrating state policy (ex. anti-gay legislation, abortion bans, etc) as “big government” overreaches.

When the various right wing constituencies are synthesized into the Republican Party, they become a party which combines the regulatory and tax views of the libertarians with the corporate welfare/spending of the pro-corporate Republicans and the social policy of the religious right.

Big government according to the mainstream Democrats: 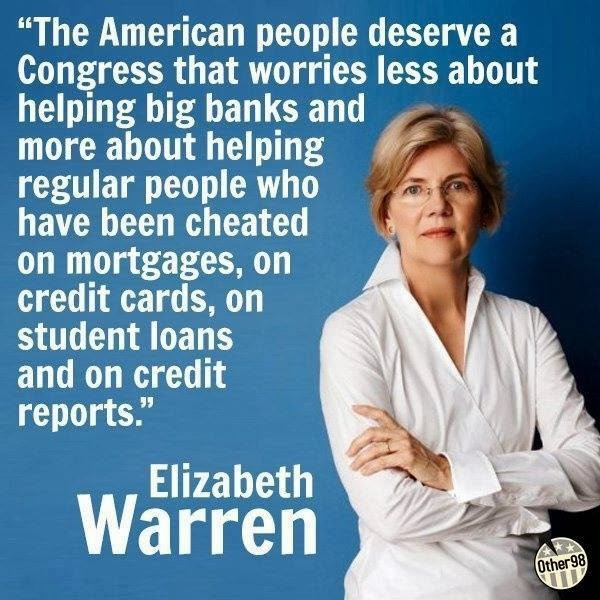 Not “big” government according to the mainstream Democrats:

In totality, the definitions of “big government” used by the political right and left wings are near-diametrically opposed, thus one must be careful when using the term. The right wing tends to see big government as a function of services given to the poor and protections given to the vulnerable, while the left tends to see it as a function of government restricting peoples’ rights based upon questionable rationalizations (ex. Religious bigotries) and giving money to the wealthy.

When talking to a person of the opposite ideology, it is probably better to find a more specific and descriptive term than the highly mutable term “big government.” If no concrete definition to a term can be agreed upon (particularly given the near 50/50 split of partisanship in the USA), it is very likely that any use of that term will lead to confusion and misunderstandings.

5 thoughts on “Partisan Differences in the Definition of “Big Government””