Since the 1800s, corporations have been a very popular method of organizing large pools of capital into cohesive economic entities. Today, corporate entities do everything from charity work to making computers for a profit and control huge swathes of the economy.

In order to allow corporations to function in the United States, corporate entities have been granted a degree of personhood that allows them to function in the market and the courts. The 1819 Supreme Court case Trustees of Dartmouth College v. Woodward enshrined the rights of corporations to enter into contracts as though they were actual people and ensuing Supreme Court decision have only expanded these rights.

Unfortunately, it appears that a confluence of legislative, executive and judicial events may result in American law dramatically altering its classification of corporations in a way that increases their power.

Under the 2010 Supreme Court case Citizens United v. FEC, corporations were given 1st Amendment speech rights—this allowed them to start spending money in elections. It is likely that an upcoming case (Sebelius v. Hobby Lobby) will further expand this 1st Amendment guarantee to include religious freedom protections.

At the same time as corporations are being re-classified as people in regard to the 1st Amendment, a trade deal called the Trans-Pacific Partnership (TPP) is being worked out that will give corporations the standing to negotiate with and challenge the sovereign laws of nation states.

If the Trans-Pacific Partnership becomes law and the Supreme Court decides that corporations have religious protections, corporations will be given a legal status that combines the limited liability of corporate entities with the constitutional protections of people, and the ability to negotiate as a nation-state on the international stage—in effect, they will simultaneously be considered corporations, persons, and sovereign nations under the law.

What is a Corporation?

A corporation is a synthetic economic and legal entity which is created in order to allow investors to do business under a special set of regulations and tax statuses. Corporations are “born” when one or more investors applies for incorporation under a state government and are governed both by the laws of that state and international treaty. 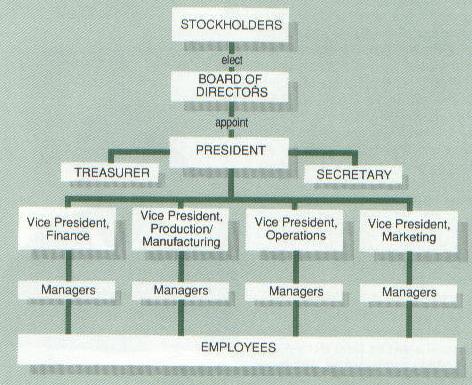 Numerous types of corporation exist—ranging from non-profits like Greenpeace, to for-profit entities like Exxon—and each type of corporation has different rules and restrictions.

There are several extremely beneficial aspects to incorporation, but the largest one is that of “limited liability.” Corporations have “limited liability” which shields share-holders from legal consequences if their corporation breaks the law or even kills people. Individual stock owners are not jailed or liable for civil damages if the company that they own acts improperly or negligently—the corporation can get sued and even given the “death penalty” (dissolved as a legal entity), but it remains a virtually impregnable shield.

While corporations are legal and economic “people” they are not afforded every right that real flesh and blood people are; for example, American corporations are not given 5th Amendment protections against self-incrimination if there is a criminal case being levied against them.

Corporations as People and Nation-States

It would appear that these redefinitions are conflicting—after all, how can one entity be determined to be a corporation, individual, and nation under the law—but the structure of the US government allows for such contradictions. Corporations are governed by laws passed by the legislative branch, while treaties are crafted by the executive branch and the judicial branch has the responsibility to interpret existing law.

Under judicial interpretations of the 14th Amendment, corporations are given a limited form of personhood that gives them some of the rights of actual people. Originally, this limited form of personhood only included the rights to sign and enforce contracts, and protections on property rights (ensuring that corporations had equal rights to own property with actual humans), but this has changed in recent years.

The largest modern shift towards corporate personhood was in 2010, when the Supreme Court adopted a radical view of corporate personhood that American corporations should have the same free-speech rights as American individuals—this right to speak also includes the right to spend money in elections (money equals speech according to the previous Supreme Court decision Buckley v. Valeo). 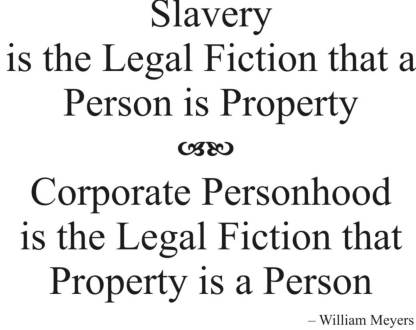 As previously mentioned, the case Sebelius v. Hobby Lobby is currently in front of the court and could grant corporations equal religious freedom rights with individuals. The Hobby Lobby case centers around the assertion by religious business owners that corporations should be protected against contraception mandates (forcing health insurance plans to cover contraception) if the owners are religious and object to such medications. This assertion is predicated upon the idea that corporations are as human as the owners and can be attributed religious beliefs.

Unfortunately, it appears likely that the Hobby Lobby case will result in another 5-4 victory for corporate personhood and that the same majority who gave us Citizens United will further expand the protections given to corporations under the Constitution. If this does occur, the judicial branch will have taken one more giant step towards giving corporations equal rights with people. 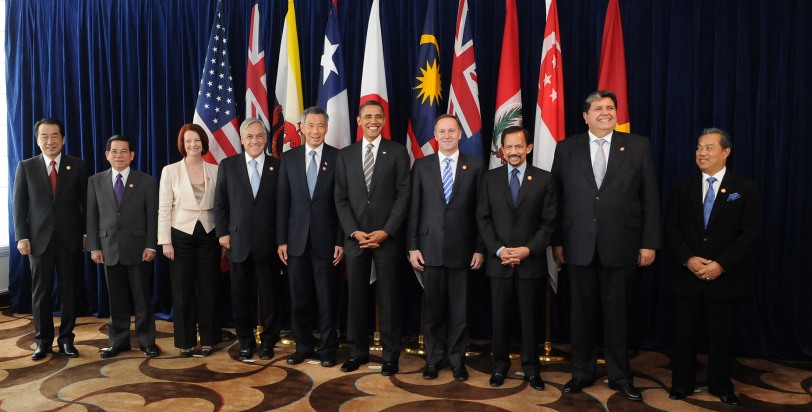 While the exact text of the TPP is not known because the treaty has been negotiated in absolute secrecy (only giving us glimpses of its content in the form of leaks), it is highly likely that the finished product will include provisions that grant multi-national corporations the ability to sue sovereign nations as though they were themselves sovereign entities.

Currently, corporations cannot usually sue sovereign nations in order to eliminate regulations that cut into profits—they must accept the sovereign rules of any nation that they choose to do business in. The ability to sue sovereign entities lies with other sovereign entities and the current law does not consider corporate entities to be sovereign (similar to how individual humans are not sovereign on the international stage).

Leaked drafts of the TPP have included provisions that grant corporations based in any of the 12 signatory countries the ability to challenge the laws of any other signatory nation based upon lost profits (lost profits are estimated by the corporations). In effect, they will be able to sue nations with stronger regulations than the one that they are based in order to recoup “losses” that are caused by regulation (ex. an oil company could sue for lost profits due to environmental regulations). In order to decide these legal disputes, the TPP would create an international legal panel, composed of corporate lawyers, who would adjudicate cases in an internationally binding manner. 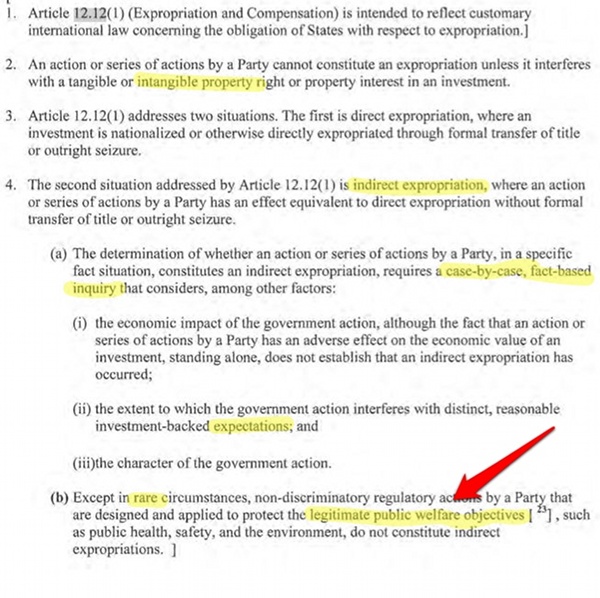 If it passes, the TPP will usher in an era where multi-national corporations will be able to sue local and state governments into compensating them for lost revenue if the government dares to impose any sane regulations. Corporations will snow governments (which often don’t have much disposable funding to sustain legal challenges) with lawsuits that eventually end up in courts packed with their own allies.

Even if one looks past the obvious corruption of letting corporate lawyers (who rotate between working for corporations and the regulatory body), force governments to compensate corporations for following environmental and worker safety regulations, this treaty threatens to take the remarkable step towards giving corporations sovereignty. It is certainly true that the TPP does not give corporations full sovereignty, nor does it cover all countries, but it does give away one major component of nation-state status.

The United States is on the cusp of giving corporations the benefits of being an incorporated entity, a person, and a sovereign entity. By giving them this triple status, the US government is actually granting corporations an extraordinary ability to pick and choose what they want to be considered in a specific situation.

If a corporation wants to negotiate on the international stage, it will call itself a sovereign entity and will obtain rights beyond those of any individual living in the United States.

If a corporation wants to spend money in elections, it will call itself a person and will gain speech rights that no sovereign nation can claim.

If it is being sued for negligence, a corporation will again be considered just an incorporated entity that has the limited liability that no person is afforded.

In effect, these circumstances give corporations the best of all worlds and the benefits of all three statuses with none of the liabilities. This disjoined status of corporations has been pushed by corporations, for the benefit of corporations, and is a grave threat to the American people. If we let corporations gain this triple status, they will use it to manipulate the law into further serving their interests. Unfortunately, this triple status is being pushed by both major political parties in the USA as well as by unelected judges who have the power to fundamentally change the law with a single case (case in point: Citizens United). 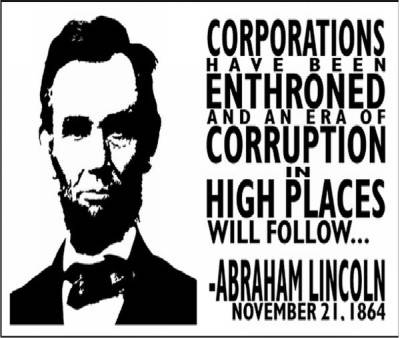 4 thoughts on “Will Corporations have Limited Liability, 1st Amendment Personhood, and Nation-State Statuses?”