Over the past 5+ years, the Republican Party has held to the unified position that President is a weak apologist for America who is seen as an effeminate pushover by the world–every time Obama travels abroad, they call it an apology tour and every time that an international conflict is resolved without a bombing campaign they call it a surrender.

Here are three examples of this phenomenon:

While I have serious problems with wide swathes of Obama’s foreign policy–most of all his drone program–I must defend him from specious accusations of weakness on defense issues. During his term in office, President Obama has been extremely aggressive and hawkish on matters of defense, intelligence, and combating terrorism. Lest we forget, Obama is the president with the fleet of killer robots, who authorized the raid/killing of Osama Bin Laden, America’s most wanted terrorist leader.

Put simply, calling Obama weak, timid or apologetic in regard to military action is not supported by the facts—he is just as vicious as any president since Carter, and has done things that most past presidents would consider heavy-handed and barbaric (ex. authorizing the extrajudicial execution of Americans abroad and implementing a sustained bombing campaign on countries that we are not at war with).

The Republican Definition of “Strong on Defense”

From a political perspective, the GOP is unwilling to call any Democrat “strong on defense,” regardless of the actual record. The single best example of this is the swift-boating of Kerry, where the GOP dishonored John Kerry’s war record in order to facilitate Bush’s victory in the 2004 presidential race. Kerry is a veteran who earned a bronze star, a silver star, and three purple hearts during his service, while Bush was a failed pilot who avoided all military action, regularly failed to show up to duty, and would have been arrested as AWOL if his father wasn’t politically powerful–despite this, the GOP called Bush “strong on defense” while they defamed Kerry and called him a weak liberal.

From a policy perspective, when the modern Republican Party uses the term “strong on defense” they are talking about aggressive action rather than actual results—they measure strength in missiles fired and people killed rather than Americans protected and conflicts skillfully diffused/averted. In effect, the idea of “defense” as protecting the country is stripped out of the equation, leaving only a measure of how much force is exerted abroad.

The right wing sees diplomacy as synonymous with weakness, thus, even when diplomacy ends with positive results, they will consider it representative of weakness. This position is extremely dangerous, as it leads to the United States blundering into quagmires like Iraq or Afghanistan (or, if McCain was elected president in 2008, Libya, Iran, Egypt and Syria) and creating situations where our troops are put in harm’s way for no reason.

True strength when defending the United States is measured in how effectively one marshals resources to minimize dangers to Americans and eliminates/mitigates threats before they come to our shores. In most cases, this can be achieved through diplomacy, without the reflexive deployment of troops or firing of missiles, both of which can cause significant blowback and worsening of existing problems. 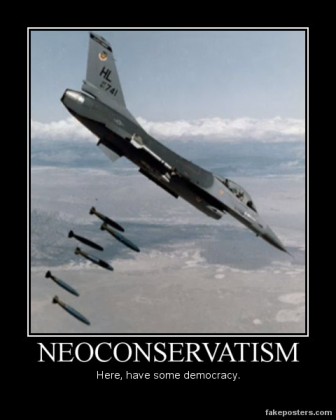 It is simply the bully mentality that equates strength with mindless violence and anybody, of any party, who believes in this flawed mentality cannot be allowed near any position of power. While I am not overly optimistic that the GOP will reform in this regard any time soon, there is an ascendant libertarianism in the party that does hold the potential to shift it to a more rational mindset.