The Looming Electoral Disaster in 2014

The 2014 election presents a perfect storm of political factors that could easily lead to an electoral disaster for the Democrats and a big win for the Republicans. A combination of the midterm electorate’s composition, gerrymandering, campaign finance deregulation, and voter suppression are mixing together in the lead-up to 2014 in a manner that doesn’t bode well for the Democratic Party.

Just last week, statistician Nate Silver of fivethirty-eight.com announced his prediction that the GOP has a 61% chance to retake the Senate—this prediction is based upon generic balloting and doesn’t include the near-inevitable turnout gap between the Democrats and Republicans in the midterm races. Given Silver’s success in predicting recent elections this prediction just confirms what many of us progressives have feared looking ahead at 2014 on the current political landscape.

While most on the right will attempts to portray any losses by Democrats as a referendum on ObamaCare and a mandate to repeal the law, this is simply not the case. In reality, the dangers to the Democrats’ electoral chances are not based around a specific policy, but rather a confluence of structural issues within the elections themselves.

Here are breakdowns of each structural issue that will harm the Democrats:

The Democrats Have More Seats to Lose

The first, simplest, and least controversial advantage that the Republicans have in 2014 is that the Senate seats which are up for grabs are largely held by Democrats. In 2008, the presidential coat-tails effect (a presidential candidate gathering support and turnout for down-ticket races) of President Obama’s campaign and the hatred for Bush shared by a vast majority of the American population, brought about a Democratic landslide in the Senate–this resulted in Democrats capturing contested seats and obtaining a short-lived veto-proof majority of 60 seats. 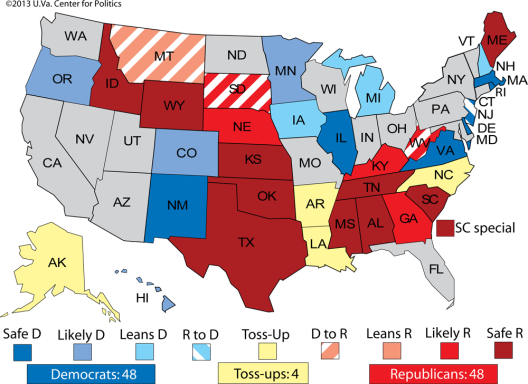 Because Senatorial elections occur every 6 years, the Democratic Senators who swept into office in 2008 will be up for reelection during the 2014 election. 21 Democratic Senatorial positions are at risk in 2014, several of which are in contested states, while only 15 Republican seats are at risk. This simple difference means that Democrats will have more to lose come 2014 and there are more races that they will have to defend.

In 2010, we saw a tidal wave of right wing extremists and fools get elected to Washington and state offices—once in office, these politicians essentially shut down the federal legislature while passing a raft of extremist laws on the state level. Unfortunately, this disaster may very well repeat itself in 2014, if only due to the composition of the midterm electorate.

Statistically speaking, the fewer people who vote, the better the right wing in the United States does at the polls. As midterm elections are almost always smaller than presidential elections, this gives the right wing an edge over Democrats.

In addition to electoral size, midterms tend to see a snap-back effect against the party in political power. Because the party that does not hold the presidency can run against the establishment (ex. the GOP in 2010 or the Democrats in 2006), they tend to pick up seats.

2014 is a midterm election—thus will likely have a low voter turnout—while a Democratic president is presiding over mediocre approval ratings. To make things worse, Obama’s approval rating among his theoretical base (the left wing; however everybody knows that he is a centrist) is dropping, thus it is unlikely that they will be motivated to turn out and support his party in 2014.

When the GOP swept into power in state offices after the 2010 election, one of the first things that they did was to gerrymander the hell out of their state districts. By cracking, stacking and packing constituencies into predictable districts that benefit the GOP’s chances of controlling the state (ex. concentrating huge numbers of Democratic leaning voters into a few districts in order to eliminate their sway in many other districts), the GOP has made every election until the next redistricting an uphill battle. 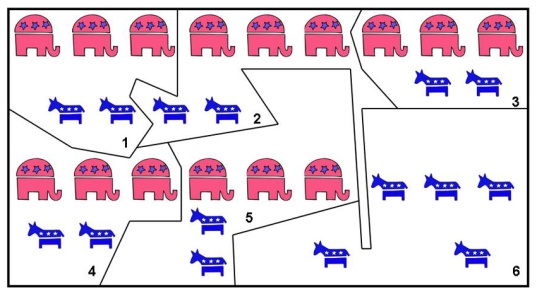 In fact, the United States is so gerrymandered in favor of the GOP that they managed to keep a significant majority in the House of Representatives during the 2012 election, despite the fact that they lost the popular vote for House seats by approximately 1.4 million votes.

Gee, I wonder if this IL district was a product of gerrymandering?

In the first couple months of 2014, right wing SuperPACs and propaganda mills have spent millions of dollars on campaign advertising targeting 2014 voters. This spending has been heavily skewed in favor of right wing and pro-corporate groups, while unions have been largely irrelevant in terms of spending. The significant advantage in spending by right wing groups during the 2014 election cycle will give them an electoral advantage, as that money buys a hurricane of deceptive advertising that tricks low-information voters into supporting the interests of the rich over their own.

Americans for Prosperity (Read: Charles and David Koch) alone has spent over $30 million during the past three months and this expenditure is only going to increase as the election gets closer.

Put simply, this level of spending is unprecedented this far away from a midterm election, and it is very likely that the Republicans will reap significant electoral gains from these well-funded propaganda campaigns–such campaigns trick low-information voters, mobilize the right wing base, and demobilize the Democratic base.

The right wing has long utilized voter disenfranchisement to suppress the minority vote (ex. purging Hispanic Florida voters before the 2000 and 2012 elections) but has long been prevented from enacting many of its preferences by the Voting Rights Act of 1965. Unfortunately, in July of 2013, the Supreme Court conservative block invalidated Section 5 of the VRA, thus disemboweling the law and opening the door for states to disenfranchise voters.

Just hours after the VRA was rendered unable to force states which have histories of discrimination to pre-clear voting law changes with the feds, Texas began to implement voter disenfranchisement laws—unfortunately, it was only the first state of many. Of the states which were fully covered by the Section 5 of the VRA, all have passed new voter disenfranchisement laws. 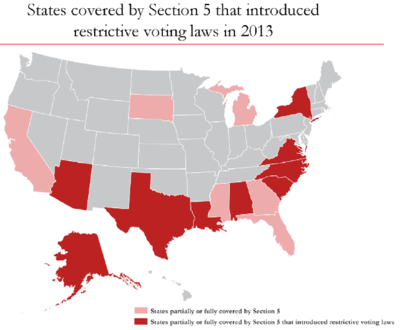 The 2014 election is the first in nearly 50 years where many southern states are untethered from federal election oversight. It is almost certain that this will have an effect on the 2014 election, either due to the voter disenfranchisement measures that have already passed, or due to the ones that will likely be passed as the election draws closer (voter disenfranchisement is often done close to an election in order to eliminate the ability of the targets to get new ID or information on how to vote).

In totality, the 2014 election will be a low voter turnout midterm election, with a fairly unpopular Democratic incumbent, where the Republicans dramatically out-spend the Democrats to win gerrymandered districts after passing all possible voter suppression laws. This is the perfect-storm of electoral advantage that could easily cause a repeat of the 2010 landslide.

Progressives, Democrats and rational moderates need to unite and vote in 2014, even if there aren’t any good choices. The current Democratic candidates may not be ideal, but the alternative is letting another wave of stupid, extreme, corporatist theocrats sweep into power on a tidal wave of corporate money–we have seen how well this worked out for us in 2010, and I for one don’t want to see a repeat.

In order to help salvage the 2014 election, you should do four simple things:

4 thoughts on “The Looming Electoral Disaster in 2014”