The Most Ignored Fact in the Abortion Debate: Banning Abortion Doesn’t Reduce Abortion Rates, but We Know Which Policies Do

Abortion has been a major political issue in the United States for decades. While several Supreme Court decisions have ensured that abortion is a legal right, pro-life activists and legislators have continued passing laws restricting abortion rights and working to end access to legal abortion in the USA. Fighting back against these efforts to restrict abortion, pro-choice activists and groups (ex. Planned Parenthood) have challenged the unconstitutional attacks on abortion rights in court.

Ultimately, the primary difference between pro-choice Americans and many pro-life Americans (IE. the ones who want to stop abortion, not simply control women’s’ bodies) is how they want to reduce abortion—contrary to what many on the pro-life side say, nobody likes abortion and everybody on the pro-choice side would celebrate fewer people choosing to abort (but they still believe that abortion access is a right that all women should have).

Pro-choice advocates believe that abortion is a right (the Supreme Court agrees) and that the proper way to reduce the number of abortions is to eliminate the reasons why women end up choosing to end pregnancies. Obviously, many reasons for abortion are virtually impossible to eliminate (ex. fatal fetal defects), but others can be eliminated by promoting the correct social policies.

Pro-life advocates believe that abortion is evil and that it cannot be allowed. In order to stop abortions, the pro-life movement has attempted to pass unconstitutional bans on abortion, target abortion clinics with TRAP (Targeted Restriction of Abortion Providers) law, and make the entire abortion process as painful, costly and degrading as possible for the women. By making it impossible for women to access safe and legal abortions, these people are trying to stop women from choosing to abort.

In the face of these two extremely divergent positions on abortion rights, individuals involved in the debate tend to lose track of the facts surrounding abortion. Over the past few decades, a significant body of evidence has built up, indicating which policies reduce abortions and which policies do not—we should use these facts to inform our debate over abortion and to find the most effective way to reduce the procedure’s prevalence without violating the rights of women.

Put simply, the policies suggested by the vast majority of the pro-life movement—banning abortion, mandating needless ultrasound or counseling sessions at religious clinics, promoting abstinence, and restricting contraception—do not reduce the rates of abortion in an area. They may make it harder, more dangerous and more painful for women to access abortion, but those women still find ways to end their pregnancies.

Numerous studies have shown that banning abortion doesn’t reduce the demand for abortions and simply leads to women using unsafe and illegal means to end their pregnancies. When legal abortions aren’t available, poor women tend to utilize illicit drugs, illegal clinics and even beatings or wire hangers to self-abort, putting themselves in immense danger. Similarly, rich women tend to travel out of country to avail themselves of abortion services in countries with far more liberal abortion policies.

Global studies by the World Health Organization indicate that the ineffectiveness of banning abortion on abortion rates holds true across virtually every nation and culture that has tried it.

Promoting abstinence-only education and making it harder for at-risk groups (the young and the poor) to access contraception actually increases the abortion rate, as both policies lead to increased unplanned pregnancy rates.

Unfortunately, this evidence demonstrates that the American “pro-life” movement’s efforts are, at best, ineffective, if not an active driver of abortion rates in their areas of influence. In effect, these zealots see themselves as making a difference and saving lives, but, in reality, they are just making themselves feel self-righteous while making things more dangerous/painful for women and not even reducing abortion rates.

The vast majority of the demand for abortions in the United States is caused by several very specific factors: women seeking abortions tend to be carrying an unintended pregnancy and are unable to financially or logistically take care of the child once it is born. Because they lack the resources to take care of a child, these women often see abortion as their best option.

The following is a summary of the results of a Guttmacher Institute report on this very subject:

“The reasons most frequently cited were that having a child would interfere with a woman’s education, work or ability to care for dependents (74%); that she could not afford a baby now (73%); and that she did not want to be a single mother or was having relationship problems (48%). Nearly four in 10 women said they had completed their childbearing, and almost one-third were not ready to have a child. Fewer than 1% said their  parents’ or partners’ desire for them to have an abortion was the most important reason. Younger women often reported that they were unprepared for the transition to motherhood, while older women regularly cited their responsibility to dependents.”

Studies by a variety of non-profits and NGOs (ex. the WHO) back up the findings of the Guttmacher Institute and have prescribed a set of policies that would most-effectively reduce abortion rates. In general, these reports indicate that there are several major policies that are the most effective in reducing abortion rates, even across numerous societies:

In order to reduce unplanned pregnancies, universal and government-funded contraception and sex education are the most effective tools at our society’s disposal.

In order to make it easier for pregnant mothers to get through their pregnancies, universal and government-funded support programs for pregnant mothers are effective. By supporting pregnant women with medical assistance, education, and the guarantee of paid leave, we can reduce the strain that a pregnancy will cause women and make it much easier for them to consider going through with their pregnancy—this, in turn will reduce abortion rates.

Countries with low abortion rates like France have implemented these types of programs for years and the USA should emulate their policy models.

Many abortions are motivated by a lack of resources and the women thinking that there is no way that they can afford to take care of a child. In order to reduce these concerns and make it more likely that these women will choose to keep even an unplanned child, we must improve our social infrastructure; specifically, we must implement universal and publicly-funded healthcare, childcare and access to quality education. 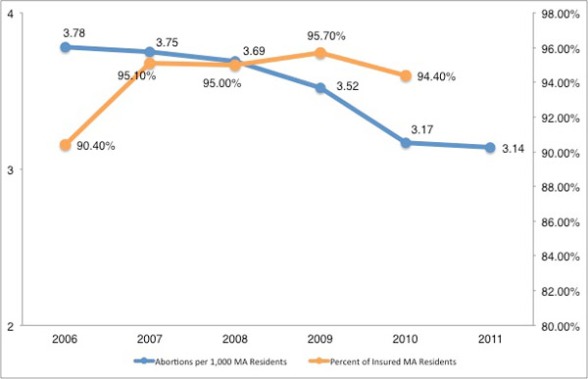 RomneyCare, passed when Romney was still the “gay-friendly and pro-choice” governor of MA, has dramatically reduced abortions in the years since its implementation—ironically, this demonstrates that Romney prevented more abortions during his time as a pro-choice governor of a liberal state than all of his rabidly “pro-life” competition during the primary combined.

“Pro-life” activists really only have two choices: they can continue to engage in ineffective campaigns of banning abortion and demonizing women who seek them, or they can support policies that actually reduce abortion rates.

If you are truly pro-life and not just attached to a doctrinaire platform that uses abortion as a litmus-test for conservatism and religious values, you will support the policies that most-effectively achieve your goal of reducing abortion rates.

Many conservatives will worry about the costs associated with some of these programs (despite the fact that most pay for themselves), but these concerns must be weighed against the value of human life. In short, every “small-government, pro-life conservative” must decide whether saving potential lives from abortion is worth a little money out of their pocketbook, or whether their desire to reduce abortion stops as soon as their part in the solution becomes more involved than simply yelling at women outside of abortion clinics.

10 thoughts on “The Most Ignored Fact in the Abortion Debate: Banning Abortion Doesn’t Reduce Abortion Rates, but We Know Which Policies Do”