Asymmetric Partisan Warfare in US Politics, Americans in the GOP’s Crossfire

Over the past five years, the Republican Party has waged a campaign of asymmetric partisan warfare against the Democratic Party, and the American people have been caught in the crossfire. Because the Republicans lack the electoral numbers to defeat the Democrats within the traditional channels of the legislature (ex. majority voting, logrolling support, making deals, etc.), they have played a long game to shut down Washington until they can win a majority and implement their policies. 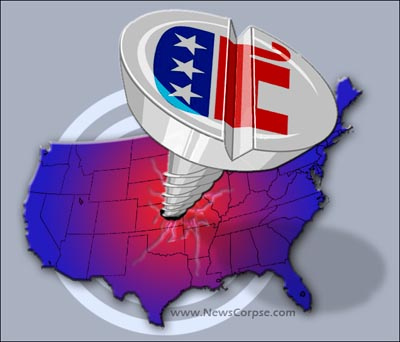 The Republican strategy is simple and, while destructive to the country, may be politically effective: Through mass obstruction and occasional extortion, the Republican Party has exacerbated the problems afflicting the American people and blocked any real policy solutions. While GOP politicians execute their side of the plan, right wing activists, “think tanks” and media proxies have waged a coordinated campaign to blame President Obama and the Senate Democrats for their inability to fix the country’s problems.

For example: In order to make Americans believe that the ACA (ObamaCare) is ineffective, Republican governors have refused to create state exchanges or expand Medicaid for their states’ poorer residents. The Medicaid expansion refusal alone will rob 6 million Americans of affordable health insurance and will allow the GOP to decry the law for not covering millions of poor Americans, as promised.

The political calculus being played by the Republicans during this strategy is based around several simple realities in the current political landscape:

This strategy was developed through a coordinated effort by Republican legislative leadership, donors, and strategists and began on the very night of Obama’s inauguration. As reported by Robert Draper, a group of GOP insiders came up with the skeleton of this plan for massive obstruction during a meeting at the Caucus Room in D.C. (in what may literally have been the stereotypical smoke-filled room at the back of an exclusive club), while Obama was across town getting sworn in as the next president.

From a purely political perspective, the Republicans are playing a very shrewd and well-thought out game—they have extorted massive concessions from the Democrats in several policy debates and have successfully smeared the Democrats in the eyes of the American people. The Democrats have regularly faced the choice between capitulating to the minority GOP’s demands and facing excoriation from their base, and allowing the Republicans to cause immense harm to the country in a way that places a large portion of the blame in the eyes of the public on the Democrats themselves. This is a terrible choice, and one that no political party wants to be forced to make.

In addition to the policy aspect of this strategy, the GOP strategy of massive obstruction has an important ideological component. By rendering government ineffective and paralyzed, the Republicans have attacked the very idea of government as a functioning institution in the eyes of the people. The Republican assertion that government is the problem, not the solution, has been turned from a non-factual canard into a self-fulfilling prophecy. 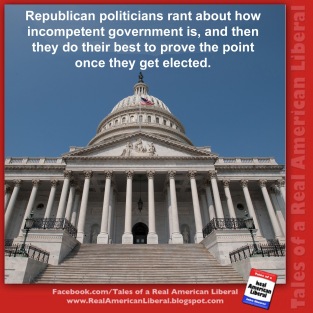 Unfortunately, this strategy’s political benefit for the Republicans comes at the price of immense pain for the vast majority of the American population: vital social programs and education have been cut, unemployed people have lost their benefits, the recovery has been hobbled and directed primarily towards helping the rich, financial/environmental regulations have been reduced, entitlements are on the chopping block, and tax revenue is at a modern low.

Here is an analogy that might make this easier to grasp: Imagine that the USA is a bus being driven by three people (driver and two navigators, analogous to the President, the Senate and the House) who should be cooperating in order to take the best route down the road. In the past, all three co-drivers had differences (ex. taking city roads rather than country roads, etc.), but they worked around these slight disagreements to do what is best for their riders. Unfortunately, one bus driver has a psychotic break and, upon not getting his way, decides to start making it impossible for the bus to go anywhere until he is allowed unilateral control–he slashes the tires, throws the GPS out the window, snatches the keys, and starts trying to cut the gas lines. Obviously, the delays caused by this destruction irritate the passengers and makes them look for somebody to blame. One of the riders is the crazy driver’s brother, so he decides to spread the rumor that all of the problems that the riders are facing are because of the decisions of the two sane drivers (after all, they have majority control over the bus).

While technically not treasonous, the Republicans’ strategy of harming the American people to improve their electoral chances is both terribly immoral and immensely unpatriotic. Their tactic is literally killing people (ex. The nearly 6000 people who will die every year due to the Medicaid loophole) and is causing long-term damage to our country’s economy. Regardless of ones’ political leanings, every American needs to kick politicians who are willing to trade your pain for their partisan gain out of office and replace them with people whose top priorities are the health and welfare of your family and your country.

9 thoughts on “Asymmetric Partisan Warfare in US Politics, Americans in the GOP’s Crossfire”