The Supreme Court Rules on Union Dues and Contraception, Strikes Blows Against Workers and Women

Unfortunately, as was feared by many, these two cases have become the most recent examples of situations where the five “conservative” (read: corporatist) justices on the court have ignored sanity, legal precedent, and the welfare of Americans to rule in favor of entrenched money.

In the Harris v. Quinn case, the Supreme Court ruled that partial public employees who gain the benefits negotiated by unions cannot be compelled to pay dues to those unions. In effect, this allows people to freeload off of the unions by demanding their services (ex. legal help) and negotiation power, while refusing to pay anything back.

According to a 1977 case called Abood et. all v. Detroit Board of Education, public unions must represent all workers who work in their so-called union shop. This decision benefitted workers in that it caused unions to improve wages and compensation for even non-union workers, but it also helped unions by allowing them to compel donations from said workers—they may not be part of the union, but they are getting benefitted by its activities and should be expected to pay their dues.

The Harris v. Quinn case amends this arrangement by forcing public sector unions to represent everybody, including partial public employees, but allowing portions of the membership to freeload. Over time, this will erode the unions’ funding and ability to negotiate, thus giving employers more of an ability to exploit all workers.

The right wing section of the Supreme Court has proven itself time and time again to be a political arm of the conservative movement—they have destroyed campaign finance reform in cases like Citizens United, aided in voter disenfranchisement by striking down portions of the Voting Rights Act, and even installed an unelected presidential candidate during the 2000 race—and this case is simply an extension of this pattern. Unions disproportionately donate to and activate for Democratic candidates (because Democrats haven’t made it a part of the platform to destroy the unions and crush workers under the whims of the “job creators”), so they have become a favorite target of the right wing. By crushing unions, the right wing can simultaneously reduce the cost of labor for their corporate donors, while eroding the power of their major political enemy.

While it is unlikely that the Harris v. Quinn decision will have any dramatic effects in the immediate future, this case will further the erosion of unions and will cause real damage over time. The unions gave us the 40 hour work week, the weekend, the minimum wage, sick leave, worker’s compensation, and most of the safety regulations that separated our factories from those in Bangladesh—as unions weaken, these things will start to regress or disappear.

In 2010, the Supreme Court ruled that corporations have the right to free speech, thus are allowed to “speak” to politicians with their money. Given this contorted view of personhood and speech, it was pretty much inevitable that a case would come up that would grant corporations some degree of religious protections—after all, if you truly believe that a corporation is a person in regard to one part of the 1st Amendment, it follows that you would believe that it is a person in regard to the rest of it.

Today’s Hobby Lobby ruling by the right wing majority found that businesses owned by religious individuals couldn’t be forced under the Affordable Care Act to provide birth control, at no cost, through their employee health coverage. This ruling opens the door to letting religious zealots deny their employees easy access to birth control, but it limited in its scope in a way that prevents other zealots from banning procedures like vaccination or blood transfusions (two medical procedures that also have come under religious fire).

While limited in its scope to contraception, this decision is absurd, unprincipled, and harmful to women. Corporations are legal fictions created so that individuals can avoid liability and effectively structure the pooling of resources; they are not alive, nor is it possible for them to have any sort of religious view. Religious individuals certainly form companies, but that action has, in everybody’s minds but these five justices (lower courts rejected this legal argument), been separated from their personal views.

In the past, an employer who has a problem with birth control doesn’t have to use it, but they cannot force those who are economically tied to their legal fiction to follow religious practices that they do not personally hold. By refusing to allow insurers to pay for birth control under the policies offered to their employees (most insurers actually prefer to supply free birth control because it saves them money from pregnancy-related health coverage), religious employers can now impose a serious obstacle to their employees accessing reproductive health care. 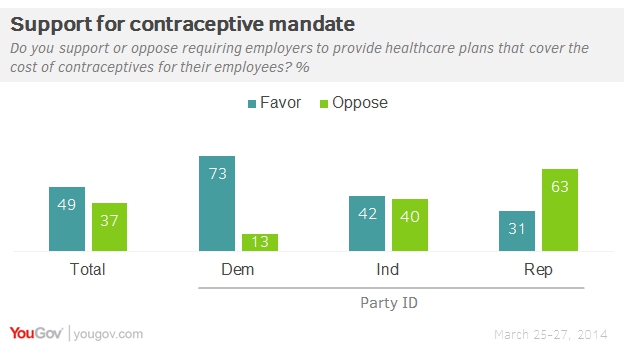 The Supreme Court’s decision carves out a specific exception for birth control that puts it apart from all other religious objection and gives religious adherents who have a problem with birth control special status. If the Supreme Court were truly being consistent (albeit extremely wrong), they would have expanded this to cover all religious beliefs and medical procedures—that said, they recognize how destructive this would be and chose to limit the harm of their decision to poorer women, whose welfare is clearly not a priority for the right wing.

In 1971, Lewis Powell was a lawyer for the Chamber of Commerce who wrote a now-infamous memo outlining a corporate capture of the judiciary that would allow big-business to control American law and, by extension, our government.

Two years later, Nixon placed Powell on the Supreme Court and the corporate coup began. During the decades since then, corporate judges have eroded democracy (ex. Buckley v. Valeo, Citizens United, protected corporations, and made it almost impossible for the common person to win in court against large interests (ex. the SCOTUS throwing out the Walmart discrimination case because they harmed too many women).

If you want to read more about this corruption in the Supreme Court, please follow one of these links to a few of my previous articles on the subject:

Unfortunately, the Roberts court has accelerated this corruption into overdrive and our country is now facing a true disaster. The top court that interprets our laws—over which there is no oversight—has become corrupted and is focused upon advancing an extremist ideology that could never win through democratic means. They are, in effect, trying to perform a soft-coup of our democracy in order to pass their agenda with a veneer of political legitimacy.

2 thoughts on “The Supreme Court Rules on Union Dues and Contraception, Strikes Blows Against Workers and Women”