Last week, a Quinnipiac poll was released, giving Americans’ opinions on the best and worst presidents since WWII. Unfortunately, this poll illustrates the paralyzing ignorance and short memories of the American people in regard to our leadership.

The least popular president according to this poll was Barack Obama, followed closely by George Bush, while the most popular president, by far, was Ronald Reagan. Overall, name recognition appeared to be a highly significant factor, as lesser-known presidents like Truman and Ford didn’t register significantly on either list.

Initially, it may appear that the Republicans come out on top in this poll, but that is a function of their lockstep voting rather than numbers. The Republicans are unified in their love of Reagan and hatred of Obama, while Democrats split in their “best” label between Obama, Clinton, and Kennedy, and their “worst” label between Bush and Nixon.

At the end of the day, no president is perfect and it is very difficult to rank presidents based upon total performance. Oftentimes, a president will do a good job in one policy area, but will completely fail in another. Here are two examples of this:

This is the southern strategy in a nutshell

It is rare for a president to be either a complete failure of or a complete success, and I would only attribute such an absolutist view of a presidency to the Bush II years.

By any objective measure, Bush was the absolute worst president in recent memory—he turned a budget surplus into a massive deficit, took record vacation days, ignored specific warnings that Al Qaida was planning to attack the US, started two wars of choice, and destroyed the international reputation of the United States by instituting a program of extra-legal kidnapping and torture. The presidency of Bush II was an unmitigated disaster and it should be beyond partisanship to agree on his failures.

Unfortunately, the GOP appears to have let the Bush years fall down the memory hole, and have even begun publically selling pro-Bush shirts on their website. According to the poll, nearly 70% of the American public do not recognize that absolute failure of the Bush II terms, and have picked some other president for their “worst” choice. 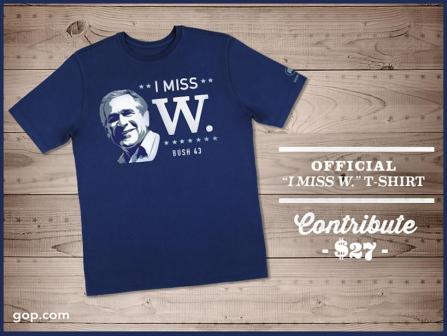 When looking at this poll, it becomes apparent just how ignorant large portions of the American people are about political realities. Opinions appear to be based upon partisanship rather than performance, and policy results are largely lost on the public at large.

The Republicans, and even some moderates, have bought into a fictional portrayal of Obama (largely pushed by the right wing media bubble) that has them despising him even more than Bush II. In many respects, they are even blaming Obama for the actions of Bush (ex. Bush is responsible for the record unemployment because he crashed the economy, but Obama is regularly criticized because he is the one currently in office). Obama has been largely irrelevant in the face of legislative paralysis, making him neither the best nor the worst president in recent years.

Ironically, the same people who despise Obama are essentially unified in their love of Ronald Reagan—a president whose platform resembles many of the policy proposals put forward by Obama himself. This disparity exists simply because Reagan is the only modern Republican not to render himself toxic (Bush II was a disaster, Bush I raised taxes, and Nixon was a disgrace), thus the GOP has latched onto him as an icon, regardless  of his actual policy ideals.

To further compound the irony of the GOP’s love of Reagan, it has recently been proven that Reagan committed treason during his 1980 campaign when he made a secret deal with the Iranians to prolong the hostage crisis until after the election. He wanted to portray Carter as weak during the campaign and was willing to promise the Iranians increased concessions if they would deny Carter a public victory (which would have contradicted the Reagan campaign’s accusations that Carter was inept in international conflicts). 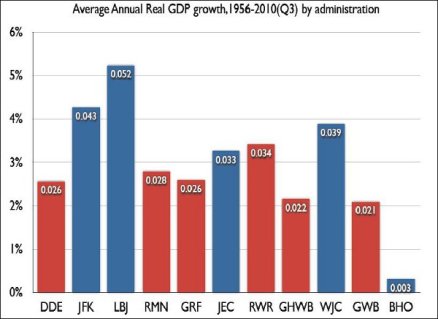 Unlike the Republicans surveyed, the Democrats appear to hold views that roughly correlate to successful policy results. Their “worst” labels belong to Bush and Nixon—who both presided over scandal and implemented policies that should have been prosecuted as crimes—while their “best” labels belong to Kennedy and Clinton—both of whom presided over very strong economic growth. That said, a significant portion of those surveyed said that Obama has been the best president, despite the fact that he has had virtually no legislative power since the first year of his presidency. There is simply no justification for this and it is another example of partisanship of name recognition overshadowing an objective assessment of policy results.

As George Santayana pointed out, “those who cannot remember the past are condemned to repeat it.” If we cannot objectively look at past presidents and their policy results in order to inform our future voting, we will end up electing people who repeat the mistakes of the past. We will elect another president like Bush and will enter a cycle of perpetual partisan whitewashing—as soon as a new president is elected, there will be a mad-dash to scrub the record of the previous executive and sell the American people on a fictional account of their terms in office.

One thought on “The Short Political Memory of Americans: Approval Ratings of Recent Presidents”