The right wing supports Israel because they believe that the state of Israel is necessary for the start of the Christian apocalypse and second coming, both of which are positions that I find abhorrent. These right wingers don’t really care about Israel (in their mythology, the country is destroyed and all the Jews die once the final conflict begins), are unable to criticize it when it actually does things that are wrong, and have absolutely no compassion for those harmed in the long-standing conflict.

Conversely, the left wingers who support the Palestinians are doing so because they see the very real humanitarian crisis facing the Palestinians and want to make things better. Unfortunately, they have made several extreme mistakes in their thinking which has led them to buy into a false narrative surrounding the situation. To them, Israel is the evil oppressor while the Palestinians are the helpless victims, while, in reality, Israel is the only democracy in the region which is facing constant threat from a bunch of theocrats that are willing to sacrifice their countrymen to create a PR point.

We need a two-state solution, but we also need to look at this situation objectively and not just take the propaganda from Gulf State oil money at face value. Most of the anti-Israel propaganda that is polluting the media is terribly slanted and serves a false narrative. In most cases, this false narrative is created by putting a dramatic headline reporting that Israel has fired missiles into Palestinian land or has started some massive police action that has oppressed hundreds of Palestinians—buried in the story, where skimming individuals are likely to miss, is the fact that those missiles are aimed at missile sites that have been launching dozens of missiles into Israeli cities and those police actions are to eliminate the people firing the missiles.

For example, the International New York Times just ran a headline which read “Israel Presses Air Barrage and Hamas Strikes Back.” In this headline, the fact is lost that Hamas started the bombardment of Israel and that it was Israel which retaliated—yes, Hamas has struck back against this retaliation, but they were the ones who initiated force in the first place and this headline overtly conceals this fact. 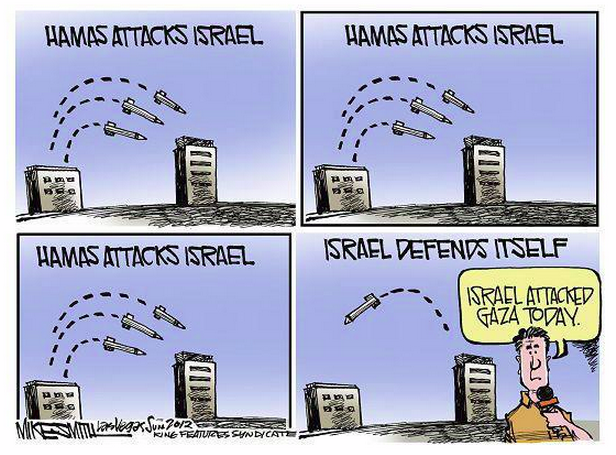 Israel is under constant bombardment and faces hundreds of missile/mortar strikes every year, but the story only starts for the media when they strike back. It is certainly true that Israel can overreact, but that is understandable given the constant assaults into their nation.

Ultimately, I see the motivations for the entire Israeli-Palestinian conflict to be described perfectly by this quote from the high-ranking Palestinian Liberation Organization member Zahir Muhsein:

For tactical reasons, Jordan, which is a sovereign state with defined borders, cannot raise claims to Haifa and Jaffa, while as a Palestinian, I can undoubtedly demand Haifa, Jaffa, Beer-Sheva and Jerusalem. However, the moment we reclaim our right to all of Palestine, we will not wait even a minute to unite Palestine and Jordan.”

In service to an ethnic and political war against the only Jewish state, the Arab nations made an extremely cynical and immoral choice—they created a class of unwilling martyrs who would be the living face of the crusade against Israel. Rather than absorb the ethnically homogenous Arab refugees from the Arab-Israeli War (AKA the “Israeli War of Independence”), Israel’s Arab neighbors forced them into camps as refugees in order to make the argument that Israel’s very existence was evil.

Over the years, terrorists within the Palestinians’ ranks have been created by feeding young Palestinians in a genuinely terrible situation the lie that Israel is to blame for their plight. This has created a cycle of hatred, where Palestinian terrorists strike from behind cover of unwilling human shields (they have placed missile sites in schools, mosques, hospitals, and old-age homes, among other places) and Israel strikes back, killing innocents in the crossfire.

Over the past few weeks, the Israeli/Palestinian conflict has flared up and violence has escalated. In order to understand this flare up and clear up misconceptions, we need to go back to the beginning.

On June 12th, three Israeli teenagers were kidnapped in the Palestinian territories while driving home. Their car was found burning on the side of the road and they were declared missing. In order to find these teens, the IDF performed mass raids on several villages in the area, arresting dozens, but had no luck finding the missing kids. These raids and arrests continued for days until the three teens were found dead on June 30th.

In response to the discovery of the dead Israeli teens, Israeli nationalists became inflamed while many Palestinian celebrated and even handed out candy in the streets. Additionally, the official PA newspaper ran taunting cartoons showing three rats with yarmulkes on the end of a fishing line.

Last week, a Palestinian teenager was killed—supposedly in reprisal for the three Israeli teens—by a group of young Israeli nationalists. This killing was particularly gruesome because they took him off of the street and burned him alive. Several days after the killing, Israeli forces captured those responsible for this killing and have imprisoned them awaiting trial. Currently, three have confessed and are facing life sentences.

In response to the killing of the Palestinian teenager, 350 Israelis showed up at the father’s house to show their condolences and the crime was rightly criticized in the media.

Put simply, at this point, the situation should be an open-and shut case of criminal justice. A group of violent Palestinian psychos kidnapped and killed three Israeli teens, which was then followed by a group of violent Israeli psychos kidnapping and killing a Palestinian teen—both groups of murderers should be arrested, sent to jail, and kept there until they die of old age (put them in adjacent cells for all I care). To me, they are morally equivalent and both should face the harshest punishments for their killings.

Unfortunately, this is not a normal situation and things become more complicated. In response to the killing of the Palestinian teen, there were massive uprisings in the Palestinian territories and Hamas begun bombarding Israel with missiles. In response to these missiles, Israel began an air campaign against missile sites and it looks like they may begin ground operations soon.

In the coming weeks, as we will obviously see the headlines that excoriate Israel for their military actions, I want people to remember the roots of this uprising. After Israeli teens were kidnapped by people associated with their government, the Palestinian leadership celebrated and did nothing to assist in capturing those responsible. Conversely, when a Palestinian teen is murdered, the Israeli authorities swiftly acted to catch those responsible and are currently working on a case to send them away for life, while the Palestinian leadership stirs up hatred and fires missiles into civilian areas of Israel.

The barrage of missiles from Hamas into Israeli cities has forced Israel to act in response. By any measure, one elected government firing missiles into the cities controlled by another elected government is a declaration of war and Israel has every right to react. This reaction will be condemned by the media—both because the neocons who control Israel have no concept of proportionality and because the media is biased—but the fact remains that Hamas started this escalation and they knew exactly what it would lead to.

Hamas is stirring up conflict and firing missiles as a taunt to force Israel into responding and accidentally killing civilians (an easy thing to do if your enemy puts their missile sites in schools and religious buildings). They are luring Israel into yet another PR catastrophe and are sacrificing the lives of their constituents to create the media narrative. They know that most reporting on this subject is slanted in the ways described above and are counting on this slant to avoid being seen as the bomb-throwers that they are.