The narrative of the right wing is that they are the responsible party that cuts the cost of government and ensures that future generations are not left in debt. Even disregarding the fact that the modern GOP has blown a giant hole in the deficit through irresponsible tax cuts, pointless wars, and a deregulation-driven economic crash, this assertion is not true.

The entire modern Republican economic ideology is based around an incredibly short-sighted view of society that trades immediate and short-term gains for immense long term losses. They take credit for saving a little money in the short term, while deny any blame for the long-term consequences of their actions.

In effect, the right wing has lost the ability to see more than one step into the future, and has become enthralled to the idea of cutting budgets, while ignoring the terrible long-term damage that their cuts can cause.

Here are a few examples of this:

Republicans have prevented any investment in the United States transportation infrastructure and have even cut public works projects. They support these cuts because they argue that it is irresponsible to add billions of dollars to our debt in order to update our aging infrastructure.

In reality, the short-term savings from not updating our infrastructure are dramatically eclipsed by losses in the long term. Our infrastructure must be upkept for commerce to continue in our country (you cannot move goods to stores without roads and bridges), and we will one day reach a point where infrastructure investment will become impossible to deny. At this point, we will be forced to update our infrastructure, regardless of the cost, and the decay will be even more advanced than it is today.

Currently, we have a joblessness crisis and the costs of raw materials of construction are relatively inexpensive, but this will not last forever. As the economy gradually improves, the cost of labor and materials will increase, thus the costs of updating our infrastructure will increase proportionately.

Refusing to update our infrastructure now, when costs are low, will force us to fix an even more decayed infrastructure, when the costs of such renovations are far higher. In this situation, the right wing’s focus on short-term savings will lead us to pay billions more in the long term, while denying millions of Americans employment during an economic slump. 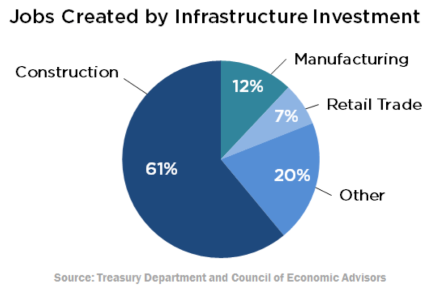 Republicans in the federal legislature and red states have cut public education and made every effort to find “savings” in our education system. These cuts have hurt public primary schools and have absolutely devastated public universities.

The right wing argue that there is a lot of waste in public schools and that teachers’ unions suck up a lot of money in extra wages and compensation for teachers (god forbid we actually pay our teachers a living wage and give them a seat at the table for negotiation). They save money in the short-term by reducing school funding and asking the teachers to suck it up and pick up the slack.

Unsurprisingly, cuts to our education system have reduced the quality of education in our country and have increased the costs of pursuing public higher education. This, in turn, has reduced the ability of our students to compete with international students and has slowed innovation, particularly in technological fields. Additionally, American students are embarrassingly misinformed as to the realities of evolution and climate change.

Saving a little money on educating students may help your budget in the short term, but it will increase crime and decrease innovation, average wages, and international competitiveness in the long term. These consequences of cutting education will render the miniscule savings from said cuts irrelevant and will result in a net loss of money to our society.

Over the past few years, the Republicans have been united in their hatred of “government healthcare” and many red state governments have made efforts to reduce the Medicaid program (never mind the federal GOP’s attempts to turn Medicaid into a block grant program that would allow states to transfer Medicaid money into the general treasuries). These assaults on healthcare availability harm many low-income Americans, no more than the mentally ill.

This assault on the mentally ill is not a new phenomenon, as GOP idol Ronald Reagan himself emptied the California state mental institutions in order to save money. It is true that these institutions were terrible and needed reform, but the community-based care centers suggested by the Democrats of the time were never implemented because of budget concerns—instead of transitioning to other care providers, the mentally ill were simply thrown out onto the streets.

Neglecting treatment for poor mentally ill Americans out of budget concerns saves a little money on treatment in the short-term, but it causes immense harm and in the long-term. Rather than receiving treatment, millions of mentally ill Americans have fallen to addiction (self-medication) and have been warehoused in prisons—this, in turn, has dramatically increased incarceration costs and has led to an expensive revolving door for the mentally ill through our courts and prisons. 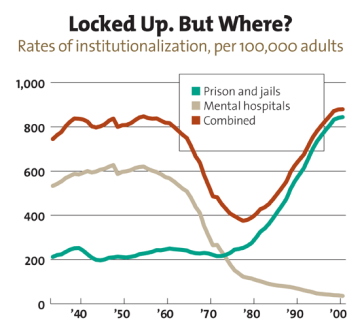 Additionally, violent and mentally ill Americans (contrary to public opinion, most psychotic and schizophrenic people are no more violent than the average person) who gain access to guns have caused hundreds of deaths in a series of mass-shootings.

The right wing’s plan to save a few billion dollars treating the mentally ill has resulted in hundreds of needless deaths, and has cost tens of billions in incarceration cost in the long term.

The right wing’s inability to see past the short-term savings from austerity to the long-term devastation of their cuts is a defining issue in modern politics. The left wing wants to grow our society and invest in the future, while the right wing is unable understand how investment can have long-term benefits.

Unless the GOP sees reason on this issue, they will cause immense harm to our country’s long-term growth prospects. We will cut our way towards becoming an impoverished service economy that lacks the ability to compete internationally, and has a decayed national infrastructure that decreases the quality of life for every American.