The Crisis on Our Borders: Unaccompanied Minors, Gangs and Politics 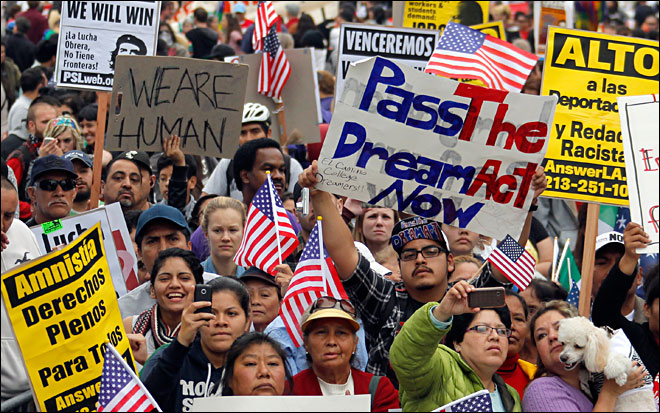 Of the myriad issues in American politics, one of the most contentious and emotional is the debate surrounding illegal immigration. On one side, nativists fear the loss of “their America” (I.E. white America) and see immigrants as a threat to be repealed, while, on the other side, people seek to balance the current law with the creation of a sane immigration policy. Both sides are highly opinionated and Americans often find themselves talking past their opposition.

For the most part, the Democrats have supported positive immigration reform—like a passage of a DREAM Act that would allow undocumented children who grew up here to gain citizenship through education or military service—while the Republicans have made every effort to block reform. This divide is understandable, as the Democrats are beholden to a diverse coalition, including a vast majority of Hispanic voters (in 2012, 71% of Hispanic Americans voted Democratic), while the Republicans gain their power from a core of southern whites. 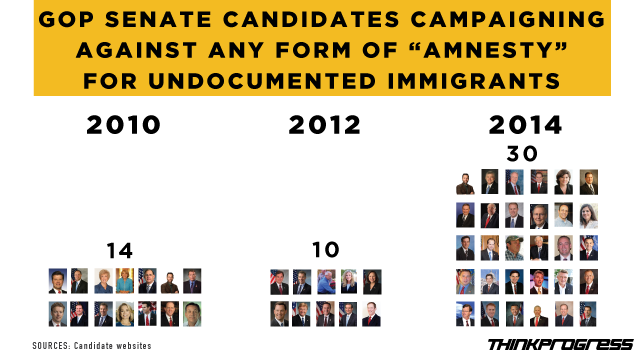 The Congressional GOP has made it essentially impossible for any immigration bill to pass through the legislature, and it doesn’t appear as though this will change any time soon. Just recently, ex-Majority Leader Eric Cantor lost a primary to an even more right wing opponent, and Cantor’s immigration stance has been pointed to as a major reason for this loss. Regardless of the truth of this, the fact remains that the perception among the Congressional GOP is that immigration reform is politically toxic and that they cannot be seen as supporting it if they wish to keep their job.

Unfortunately, in recent months, solving the illegal immigration crisis has become over more important, as hundreds of undocumented children have fled to our borders away from terrible violence in their own countries. These children risk their lives to come here and escape the criminal gangs that have terrorized their homes, and we need find a humane way to deal with their situation immediately.

A Short Summary of Illegal Immigration

People from all over the world immigrate to the USA to seek opportunities or freedoms that they cannot get in their home country. This immigration has made the USA a cultural melting pot and one of the most ethnically diverse nations. Unfortunately, while the United States is a nation of immigrants, we are also a nation that has rarely been very friendly to the newest arrivals. 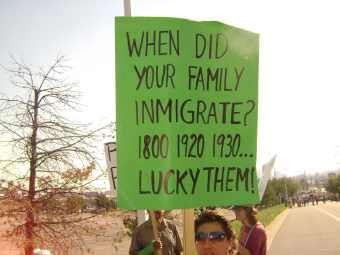 Once a group of immigrants established itself in the USA, they no longer saw themselves as immigrants and often began looking down on those who are new arrivals to this country. The Irish were seen as lazy drunks who couldn’t be employed (some businesses had “Irish need not apply” signs), while Italians were seen as inherently criminal, and Mexicans were demonized as drug addicts—in short, every race to have a major migration into the USA has gone through a period of demonization until the next group began to enter the country and the previously demonized became just another group of Americans.

During the early years of our nation, there were no immigration laws, nor birthright citizenship (that was established in the 14th Amendment), and so there was no such thing as an “illegal” or “undocumented” immigrant. The first laws to significantly restrict immigration were the Page Act and Chinese Exclusion Act during the late 19th Century. These laws were passed in order to stop mass immigration of Asian workers (primarily Chinese workers) in response to economic concerns that they would drive down the pay of other workers and racism.

In 1891, the Immigration Act passed as the first comprehensive immigration law that set out a process by which immigrants could gain citizenship. This law also implemented the process by which people who immigrated illegally could be found and sent back to their country of origin. In 1924, this law was amended to include hard quotas based upon race, limiting the number of people of each race who could emigrate each year—this quota system would later be altered to limit immigration by country of origin rather than race during the civil rights era.

During the latter half of the 20th Century, immigration law underwent numerous changes, many of which made it even harder for people to immigrate legally—that said, there were some positive changes, like the guarantees that undocumented immigrants have equal legal rights with citizens and that their children be allowed to attend public schools.

Currently, the largest sources of undocumented immigration are South America and Central America. The two largest motivations for immigration from these regions are the pursuit of economic opportunity and flight from extreme criminal violence.

Economically, the USA provides a better opportunity than many Central and South American nations. Even while undocumented, immigrants from these nations can make more money in the USA than they can at home, thus desperate people looking to provide for their families often make the dangerous journey to the USA.

The drug war has devastated countries in these regions (ex. Honduras) by creating large drug gangs and cartels that take over entire areas and terrorize the population. To put the scope of this violence into perspective, just look at the following graph: 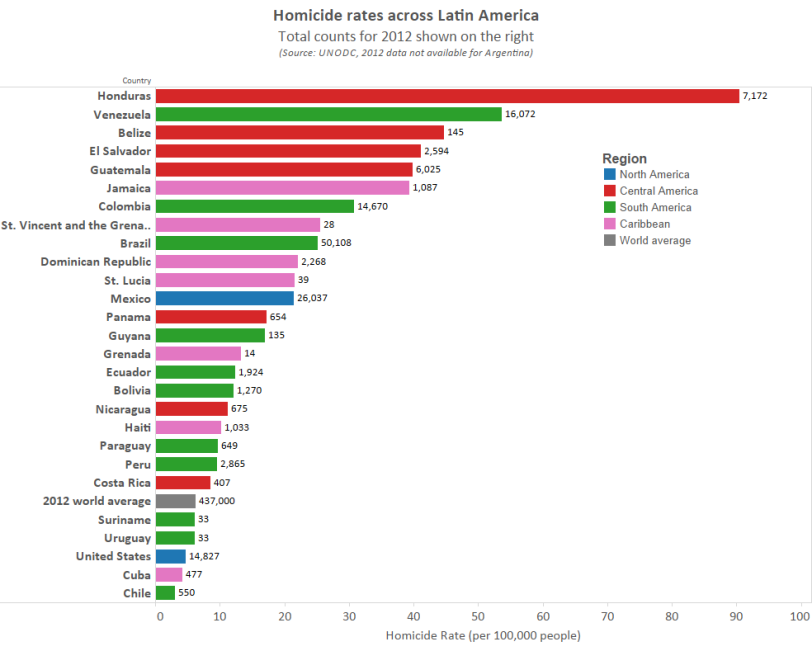 The extreme violence in Central America shown on this graph has made many people desperate enough to flee north and seek residency in the USA. As our legitimate immigration process will not let most of them through, they are forced to enter into our country illegally.

As previously mentioned, in recent months, the number of Central American children seeking asylum in the USA has exploded. These children are fleeing the violence of their home countries and represent a true humanitarian crisis. 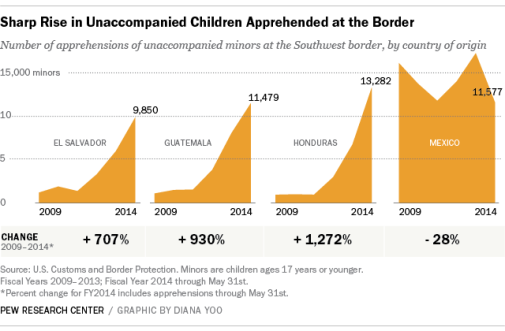 Some transnational drug gangs (ex. the El Salvadorian MS-13) use children as mules, lookouts, and drug runners, regardless of whether they are willing. Children are often killed if they refuse to work for the gangs, leaving many only three choices:

Obviously, many children have been sent along the third path by their families, and the USA has become a major destination for these refugee children. Unlike many undocumented immigrants, these refugee children often turn themselves in to immigration officials and have made no effort to conceal their status—they are not flaunting our laws, and are only looking to escape the terrible situation that they were born into.

At current count, over 50,000 such minors have sought asylum in the USA during 2014 alone and the flow is not stopping. Most of these kids are being held in federal custody so that they can receive a hearing that could result in either asylum or repatriation. This hearing is legally guaranteed by a 2008 anti-human trafficking law that ensures all children from countries that do not share a land border with the USA (I.E. not Canadian or Mexican) receive a hearing to determine whether or not they should be protected under an asylum status.

Unfortunately, right wing nativists in the south have turned these children into a political prop with which they can demonstrate their hatred for immigrants to their base. Numerous Republicans have spoken out negatively about these children and have called to summarily send them back to their home nation without a hearing (illegally in violation of the 2008 law). 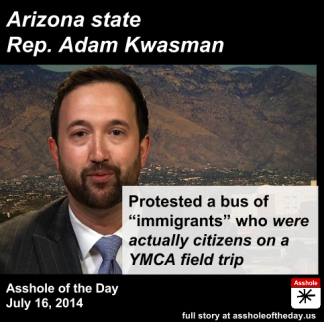 Just recently, an Arizona Republican, Adam Kwasman, chased after a bus he thought contained some of these children as part of a political stunt, only to find out after the fact that the bus contained local YMCA students.

In my opinion, we have no choice but to grant these refugee children asylum. We created the gangs that they are currently running from when we started the war on drugs, and we should not turn a blind eye to the human costs of our mistakes. At the very least, we have a moral obligation to take in these children and ensure that they are not sent back into their home countries to face death or a life of compulsory crime.

The United States needs immigration reform that takes the currently undocumented out of the shadows and ensures that they receive some legal status. In order to do this, we need to pass laws that give people legal residency in the short term, working towards a path to citizenship in the long term.

Children who were raised here and have shown a desire to be productive members of society through pursuing an education of military service should be allowed to stay in our country. They were brought here through no fault of their own and have demonstrated that they will become a vital resource for our society in the future.

Adults who immigrated to take care of their families should be punished for breaking the law before they gain legal residency, but this punishment should not be too harsh—they were forced into an impossible situation and simply did what they could to keep their families afloat. Additionally, they served as an important, but often neglected, worker class that took the jobs that Americans simply would not take (as was discovered in some states after they tried to make the lives of undocumented immigrants impossible). Personally, I think that these people should be forced to pay all back taxes, but should be given provisional visas, contingent upon them obeying the law.

One thought on “The Crisis on Our Borders: Unaccompanied Minors, Gangs and Politics”