The Purge Anarchy: Social Commentary on the NRA, Austerity and Class Warfare

The Purge: Anarchy is a hyper-violent action movie that doubles as a deceptively brilliant piece of social/political commentary, targeting the extreme right wing and the gun lunatics in the United States. 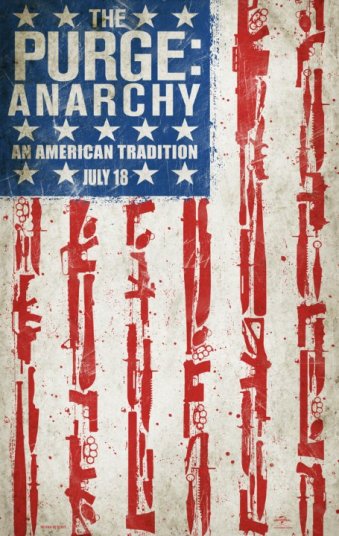 As a foreword to this article, I would like to say that I would warn ANYBODY who is squeamish, sensitive to violence, or disturbed easily away from this movie—it has virtually non-stop graphic violence. Personally, I am not usually a fan of such movies, but that is because they tend to cover a poor or non-existent plot with gunfire and explosions. That said, the Purge has a very interesting premise, so I watched it and will talk about it so you don’t have to go see it for yourself.

The Purge is set in a near-future America where an extreme right wing group called the New Founding Fathers of America (NFFA) has taken control over the government and implemented a “holiday” every year where all crimes are legal. For a twelve hour stretch, no public services (ex. police, fire, hospitals, etc.) are available, and nothing is illegal, including murder. 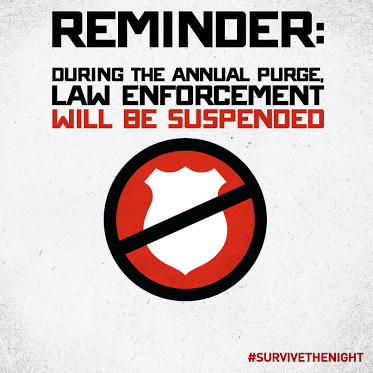 Poor people are preyed upon by those who can buy weapons or protection, while the rich remain secure in fortified houses, either partying or killing people who are captured and brought to their homes.

The basic premise of the movie is a meeting of three different groups of good people—a police officer looking to avenge his son, a mother and daughter, and a couple whose car was sabotaged—meeting and trying to survive the night as psychos and murderers stalk their every step. They face paramilitary death squads, gangs who capture people to sell to rich people for caged hunts, and random lunatics who gang up on the purge night to act out the violence that they normally hide over the year.

Eventually, they are captured by their pursuers and brought to a group of very wealthy people who bid for who gets to hunt them—predictably, it ends very badly for these wealthy “hunters” and the group of main characters escapes certain death.

Long story short, this group travels through the city, playing a game of cat and mouse with their pursuers and witnessing the insanity of the night, an inordinate number of people die, and the story ends with the good people more or less triumphing (as much as can be expected in such a cynical movie).

Social Commentary in the Purge

Arguably the most on the nose piece of commentary in the movie is its portrayal of the insane gun culture of the United States. The Purge’s American is awash with guns that are taken out one night a year so that everybody can shoot at anybody who offends them (or who is simply in the way).

In many ways, the movie portrays an extreme illustration of the end-state for the NRA’s gun nut rhetoric. Almost everybody is armed with powerful weapons and is expected to defend themselves rather than relying on the government for help. No restrictions are put on gun sales (there is a guy openly peddling guns on the street to anybody who walks by hours before the purge begins), and people who are not armed are simply prey.

During the Purge everybody “stands their ground” rather than relying on the police for protection and the only thing that can stop the “bad guys with guns” are good guys with guns (or other bad guys with bigger guns, who will then turn them on innocent people). This is the world of gun anarchy that the NRA is bringing us incrementally towards. 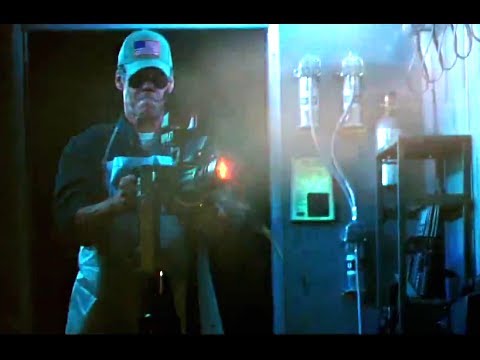 The massive firefights during the purge nights are the end result of a world where guns are ubiquitous and vigilantism is acceptable. The heavily armed society of the Purge is anything but safe, as everybody has guns and is using those guns to perpetrate violence against everybody else. Innocent citizens own guns, but criminals and gangs own even more guns and are happy to use them.

Finally, the Purge gives a very convincing portrayal of the violent segment of gun enthusiasts and their fetishization of violence. While some people are obsessed with guns because they are paranoid, the scary fact is that many simply want to shoot somebody—they fantasize about using their guns for “self-defense” and cannot wait to use them to kill anybody who “threatens” them. This zeal has caused many gun nuts to shoot and kill innocent people who really never posed a threat to them (ex. George Zimmerman or Michael Dunn).

While the NFFA calls the purge a time to expunge negative emotions for the entire year, the reality of the night is that it is an excuse to cull the bottom of society. The poor are killed because they live in the worst areas—which are often used as battlegrounds for heavily armed suburbanites and gangs to come and kill people—and lack the resources to hire private armies. Just to hammer this point home, it is discovered by the main characters that the government secretly hires death squads of heavily armed soldiers to go into housing projects to kill the poor when the poor are not being killed in sufficient numbers.

The goal of the fascist NFFA is to enact extreme austerity by eliminating those who rely on social welfare programs. The government doesn’t need to pay as much to support the poor when thousands of poor people are killed every year in the brutality of the purge.

The extreme right wing in the USA wouldn’t dare support killing the poor overtly, but they happily support austerity that makes life unlivable for the lower class. In effect, they are going at austerity from the other side of the equation; instead of killing the poor to reduce the costs of welfare, they reduce welfare until the poor can no longer survive.

Arguably the most disturbing aspect of the Purge move is not the actual violence, but rather the extreme dehumanization of the lower classes by those with money. Middle class and wealth people sit at home, watching jingoistic programs and live feeds of cities tearing themselves apart, with absolute detachment. The poor who are unable to defend themselves are seen as sub-human and, during purge nights, it is acceptable for anybody to kill them.

The uber-wealthy often “order” poor people to kill by paying them to sacrifice themselves willingly or paying people to snatch the unwilling off of the street. To these uber-wealthy, the poor are no longer human and are little better than animals to hunt.

While I wouldn’t argue that many real-life uber-wealthy Americans consciously think like those in the Purge that it is a good idea to massacre the poor, the attitude of a disturbing number of the uber-wealthy mimics that of their analogs in the movie. Rich bankers screw poor people out of their pension funds and for-profit health insurers charge usurious prices for life-saving treatments, while chemical CEOs knowing spill poison into drinking water just to save a little money—they may not be picking up a knife or gun to kill others, but they are causing death and hardship just the same.

In order for the real-life uber-wealthy to knowingly harm those who are less fortunate, they must dehumanize them and see them as unworthy of concern. While the real-life version of this dehumanization is not as extreme or overt as it is in the movie, both are representative of the same toxic mentality.

12 thoughts on “The Purge Anarchy: Social Commentary on the NRA, Austerity and Class Warfare”