For the last month, Israel has been engaged in a military campaign in the Gaza strip that has resulted in thousands of deaths. Unfortunately, many of the dead are Palestinian civilians who have been caught in the crossfire between the Israeli military and the Hamas terrorists who embed themselves in Palestinian civilian populations.

Hamas has long utilized the tactic of hiding its leaders out of the line of fire (ex. the Hamas leadership currently lives in luxury and safety in Qatar) while sending its lower echelon on suicide missions and firing missiles from behind the protection of human shields. They know that they cannot destroy Israel militarily, so they have decided to turn the entire Palestinian population into unwilling martyrs in a PR war against Israel—by drawing retaliatory fire into Palestinian civilians, Hamas makes Israel look bad and does more damage than any of their missiles can.

Israel is controlled by right wing neoconservatives who have no concept of military strategy that doesn’t involve bombing somebody, thus has fallen directly into Hamas’s trap. The IDF is directed to strike back against missile launch and storage sites, regardless of whether that site is a school, refugee area, or populated building. Yes, Israel tries its best to notify civilians of incoming strikes, but this is far from effective in minimizing civilian deaths and completely useless in stopping property damage.

Unfortunately, many in the media recently have been tricked into reflexively condemning Israel whenever it strikes back against Hamas and trying to hold Israel to a ridiculous and unprecedented standard in war. To demonstrate this problem, I will outline a basic model for an anti-Israel media hatchet job

The media often reports on Israel’s targeting of schools, hospitals and mosques with missiles, insinuating (or often just saying) that they are war criminals because of their attacks on these traditionally civilian areas. They show truly horrifying pictures of injured children and women in the front page, decrying Israel for killing them.

Here is an example of such a photo, taken from the Huffington Post’s front page: 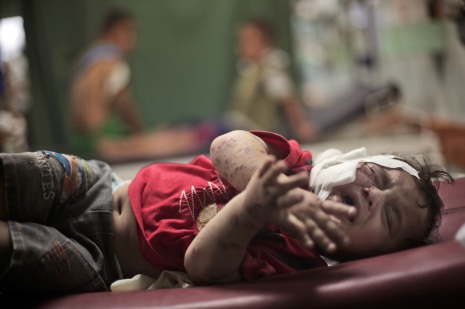 It is true that the civilian deaths in these places are tragic and that children killed in the crossfire are the very definition of innocent victims, but the often-neglected fact in this reporting is that Hamas uses mosques, schools and hospitals as a cover to fire missiles into Israel. Israel is given the impossible choice between firing missiles at schools, or enduring a bombardment that could result in a missile or mortar hitting an Israel school (the Iron Dome is only 90% effective and Hamas has fired thousands of rockets, missiles and mortars into Israel).

If Hamas is using a UN school to fire missiles, it becomes a completely valid military target for Israeli missiles. Putting you missiles into schools is no more a shield from retaliation than putting day-care centers into military bases—if you are using a building to conduct a war, you cannot argue that your enemy has no right to strike at your location just because there are civilians there.

The media has perpetrated a hatchet-job on Israel/Palestine reporting so often that a pattern has emerged.

Imagine a situation where Hamas and Israel agree to a humanitarian ceasefire for several hours, only for Hamas to fire missiles into Israel from behind cover of a school (as has happened numerous times in the past). Israel strikes back against Hamas’s missile site at the school, killing several Hamas members and several refugee children. 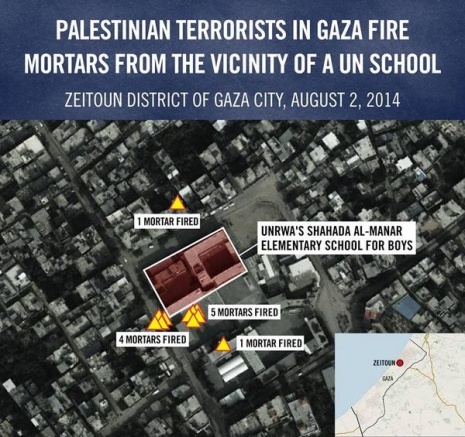 The media, more often than not, will report on this by saying that both sides argue that the other broke the ceasefire (despite the fact that Israel has no reason to do so and obviously didn’t), and that Israel is in the wrong for killing the children at the school. They will show the pictures of the injured children, prominent quotes from various world leader condemning the attack, and commentary from their in-house analysts decrying Israel for war-crimes. Buried somewhere in their article, they may mention that Hamas was firing missiles from the vicinity of the school, but, if they do so, they will often add the caveat that Israel is still wrong for not holding fire when human shields are in the area.

While reporting on the strike, the media will use the Gaza Health ministry’s casualty numbers without question (they are a Hamas-controlled organization) or even a disclaimer to the reader that they are using the unconfirmed casualty estimates of one side of an armed conflict. They will accept the Gaza Health Ministry’s 82% civilian casualty rate as valid without any independent confirmation.

All in, the media narrative is to damn Israel for having the temerity to exist in the first place and not sit on its hands while terrorists fire missiles over their borders. After all, the Iron Dome protects most Israelis and when an Israeli hears the incoming missile, they know that there is an only a 10% chance that it will land and possible kill their children.

Additionally, the media tends to infantilize the Palestinians, refusing to hold them responsible for their own actions (ex. using human shields), and putting all of the responsibility on Israel for anything that happens. Many argue that Israel, as the vastly superior military power, has the duty to restrain itself and not fire back when attacked—this is a ridiculous assertion, and I simply cannot find any other situation where it was used against another country (the only thing even close was some talk about the US’s involvement in Iraq, but that was centered on the illegitimacy of the war).

To top off their argument, the media tends to go back to calling Gaza an “open air prison” that borders on a concentration camp. This is not only false, but indicative of a willful twisting of the facts. In 2005, Israel packed up and left Gaza, displacing many Israelis, in order to give them complete autonomy—this was short-lived, as Gazan terrorists started to set up missile sites and attack Israel, which led Israel to start a blockade (thus the “prison” assertion). Additionally, while Egypt controls much of the border with Gaza, they somehow never get mentioned in this story, nor do they have to suffer missiles flying over their borders.

At the end of the day, I have major problems with a lot of Israel’s policies (ex. the stupid and inflammatory expansion of settlements beyond the 1967 borders), but refuse to buy into the ridiculous conflation, assertions, and arguments of many in the media condemning Israel. There are plenty of real complaints about Israeli foreign policy without resorting to propaganda points from people who have sworn to annihilate the only Jewish state because of an absurd, bronze-age religious bigotry.

Personally, if I were in control over the Israeli military, I would immediately stop all missile strikes into Gaza, withdraw all troops (which has already started), and completely shut the Israel-Gaza border. Whenever a terrorist in Gaza launches a missile, I would drop an electromagnetic pulse bomb capable of destroying all electronics within a square block (they can be built to affect areas as large as a continent to as small as a car) on the launch location in order to disable to missile site. Instead of killing civilians—giving the terrorists the exact PR that they desire—I would neutralize their ability to launch more complex missiles, use modern communications technology, or even utilize modern cars to transport their weapons. In effect, I would send them back to the Stone Age and sit comfortably behind the Iron Dome.

In addition to utilizing nonlethal EMPs, I would implement a direct and equivalent retaliation scheme using special operations (Mossad’s Shin Bet). For every Israeli to be killed by a Hamas terrorist attack (via missile, suicide bombing, or tunnel-attack), I would order Shin Bet to assassinate a top Hamas official. Instead of risking killing civilians in order to eliminate Hamas underlings, I would bring the fight directly to the commanders and ensure that they know that their personal martyrdom will come if they actually succeed in killing Israelis. As most of these people are cowardly bigots, who grow fat off of the aid stolen from their people (ex. Arafat died a billionaire) while sending other people to die, the threat of such retaliation will likely get Hamas to back off the missile strikes.

This is the home of Khaled Meshal, the top leader of Hamas, located in Qatar, where he lives and directs Hamas to fire on Israel.

To round out my plan, I would give the Gaza residents food, building materials, medical care, and educational supports so that they can actually build a society that will one day support peace with Israel. This will likely take a long time and a lot of effort, but helping to build schools is actually a lot cheaper that destroying them (those missiles are extremely expensive) and is a far better path towards peace even if it isn’t beneficial in the short-term.

Through a combination of crippling Hamas as extending a hand to the Gazan Palestinians who want peace, I hope that the Palestinians would wake up, overthrow their corrupt leadership, and actually start building the country that they have been demanding for so many decades.

4 thoughts on “Anatomy of and Anti-Israel Media Hatchet Job”