If you only watch the corporate news and don’t live in New York City you may not know that a truly massive climate change protest just happened. Yesterday, September 21st, was the day of the “People’s Climate March,” where approximately 400,000 Americans took over two miles of Manhattan streets in order to raise awareness of anthropogenic climate change and to demand action to stop it. 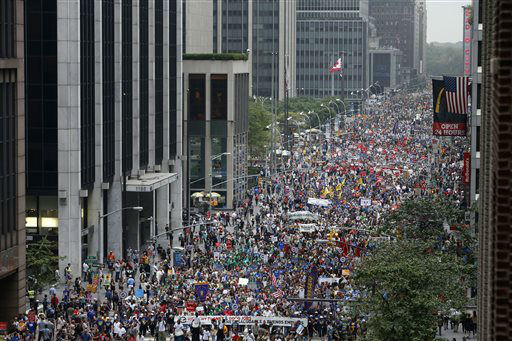 Unfortunately, the television media spent a miniscule amount of time covering this protest (ex. ABC’s coverage totaled a grand 23 seconds) and many Americans simply haven’t heard anything about this action. This negligence by the media could be caused by many things, but it is likely a combination of the fact that climate change is difficult to cover without the right wing freaking out and calling them “unbalanced” and that such protests are seen as a bit of a niche issue that won’t draw the viewers in the way that a celebrity scandal will.

Regardless of the media’s negligence, it is undeniable that both climate change and the American population’s acknowledgement of the problem are very real and growing.

If you are unfamiliar with the basic processes of climate change, you can go to the following link, where I give a basic summary of how it works.

Climate change is a chronic problem that has immense ramifications on a global scale—unlike with acute regional crises (ex. ISIS terrorism, ebola, etc.) the costs of climate change aren’t easy to see, but they are very real. According to recent studies, it is estimated that the YEARLY costs of climate change currently amount to 400,000 deaths and $1.2 trillion in economic damage. 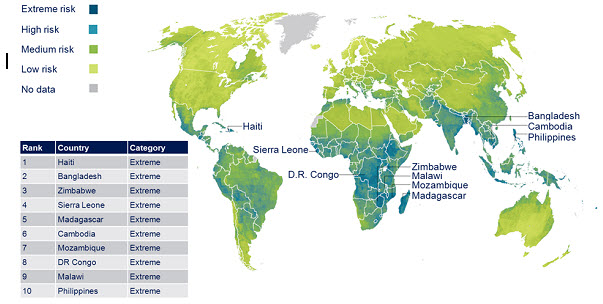 As climate change worsens, these costs will increase and the death tolls will rise. The vast majority of these deaths will occur in the developing world, particularly South Asia and Africa, but the developed world will not be spared.

While some disbelieve that climate change is really lethal (after all “how could one or two degrees increase in temperature kill millions of people and cost us trillions?”), the danger of climate change is actually very simple:

As a side note, you can thank climate change for expanding the habitat of the Japanese giant hornet—an evil, thumb-sized, acid spitting hornet with a potentially lethal sting and really bad attitude—to include a far larger area, including the central United States. 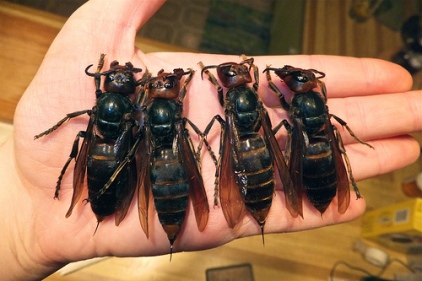 Dear Kansans: you can thank climate change for your new neighbors.

The Need for Change

Put simply, climate change is a slow motion global catastrophe and every nation must get on board with a solution. Unfortunately, developed nations are addicted to the relatively cheap fossil fuels and fuel-producing nations have based their economies around their natural resources—this has created a massive political impediment to action and we have stood by while the situation has grown out of control.

The September Climate March is a sign that the American population is starting to get active and that change may become possible. While Washington is gridlocked (or on vacation, as they were for the entire month of August and will be until after the November elections), the people are waking up to the problem. Yesterday’s march was the largest such climate action on record in the United States, and I hope that momentum is maintained.

The United States sees itself as a world leader and we must start acting like it in issues that don’t involve dropping bombs on countries filled with people who have darker skin tones than us. We produce 16% of the world’s carbon pollution (second only to China’s 24% and far above the UE’s third place of 11%) and action must start with us. Cutting emissions is a global responsibility and we must not let the profits of a few billionaires and their polluting extraction companies overshadow the needs of the entire world population.

The reality is that we will need to change our lifestyles to be less consumerist and more efficient—sacrifices will be needed from everybody, and we need to start today.

3 thoughts on “The People’s Climate March”