Over the past few months, the American public has been bombarded with frightening propaganda from our political and media establishments that up-play the dangers of the Islamic State (AKA ISIS, ISIL or Daesh) attacking the United States. We have heard innumerable news reports describing barbarous crimes committed by masked ISIS leaders, and have seen videos of Americans getting decapitated. Additionally, the Obama administration has hyped the threat of ISIS to justify attacking them as a legitimate threat to the USA, while the Republicans have hyped ISIS as a failure of the Obama administration that should justify their election back into positions of power.

American groups which require a bogeyman to consolidate support and draw attention in the public eye (politicians use this to gain votes while the media uses it to draw viewers) have turned ISIS into their own personal profit machine.

Unfortunately, the fact is, while the USA doesn’t face a credible threat of military incursion from groups like ISIS, we do have structural weaknesses in our political system that could easily be exploited by a group like ISIS. The largest such weakness is our political system’s infiltration by dark money that allows any group with sufficient funds to gain a hidden foothold in our representation. 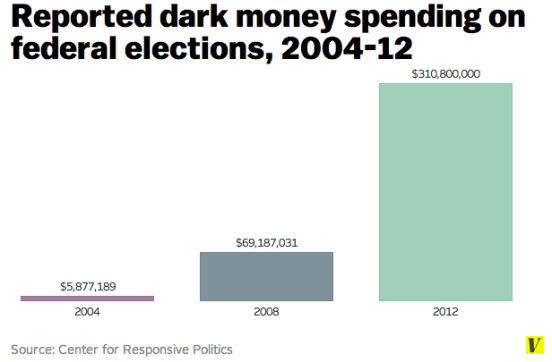 In short, if groups like ISIS are threats, it is not because groups they have military arms that can penetrate our borders, but because they have money that can penetrate our elections. This is not to say that there is any proof that ISIS has already done anything in this regard (to say that would be simple fear mongering), but simply to point out the very real danger that this vulnerability creates.

Ever since the Buckley v. Valeo Supreme Court case in 1976, money has equaled speech in regard to political contributions. This decision set the stage for the Citizens United v. FEC case, which spawned innumerable dark money Super-PACs, where unnamed donors can spend unlimited amounts of money in our elections. Just recently, the Supreme Court decided McCutcheon v. FEC in a way that lifts the aggregate campaign contribution cap that prevents one entity from donating money to every political candidate and campaign committee (now they can donate the maximum to every candidate, rather than just a few).

These cases by the Supreme Court have created the situation where anonymous groups can spend unlimited amounts of money on American elections. They hide behind the loopholes in the 501 sections of our tax code and the legal fiction that money is the equivalent to speech in order to do this and there is little that can be done to stop them.

Now, many people might be wondering “what does this removal of campaign finance laws have to do with ISIS’s ability to harm the USA?” These people aren’t realizing that ISIS, like any other group with money, can donate, in secret, to our elections and sway our internal decision-making in their favor while never revealing their involvement. 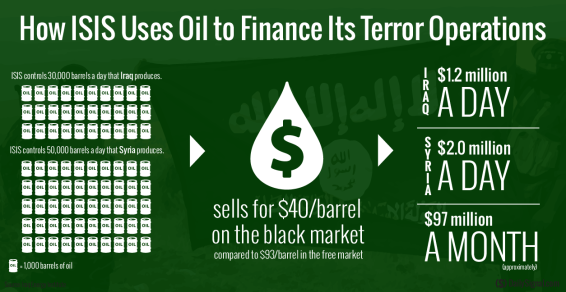 Lest we forget, ISIS is estimated to turn a profit of $3 million dollars a day from its oil, blackmail, and taxation infrastructures, and has stolen hundreds of millions of dollars (if not over a billion dollars) from banks, museums, and towns that it has captured—a conservative estimate of their total funding indicates that they have nearly $1 billion, while other reports indicate that they may have nearly $2 billion. While they could easily use these profits to buy weapons on the black market, to use in futile attacks on American military base, they could also employ this money to cause real disruption in our political system and real harm to our people.

According to FEC data, the average cost of a Senate seat in the United States is approximately $10.5 million while the cost of a Congressional seat is a paltry $1.7 million. Given the fact that the better funded candidate in most political races has a higher chance of winning, the $3 million dollars a day gained by ISIS becomes a lot more worrying in the form of campaign contributions than it is in terms of bombs. Here are a few examples:

While some may assert that it is farfetched to imagine that a terrorist group would use our lax campaign finance laws to affect American policies, the fact is that this has already happened. In 2012, an Iranian terrorist group called MEK succeeded in getting its name removed from the official terrorist group listing by employing a multi-million dollar lobbying strategy, which donated money to a bipartisan series of politicians. In effect, they bought off enough of our politicians that our country decided to shift its foreign policy in their favor.

The power to buy our government is not limited to terrorist groups, as foreign governments, corporations and simply rich individuals can also use this same weakness to gain power over American politics—the case of ISIS is just a particularly extreme one. In our current system, basically any group with money can secretly buy power in our government and co-opt our political system.