2,4-D Resistant GMO Crops Appear Imminent, What are the Dangers?

One of the primary dangers of genetically modifying crops to pair with a pesticide is that it encourages the over-use of that pesticide and the development of super-pests. Overuse of a pesticide kills all but a resistant minority of pests and, after several generations, this causes it to become ineffective. Once a pest population is resistant to a pesticide, an even more powerful pesticide (or simply more effective) is required—this progression creates an ever-escalating chemical arms war between nature and farmers. 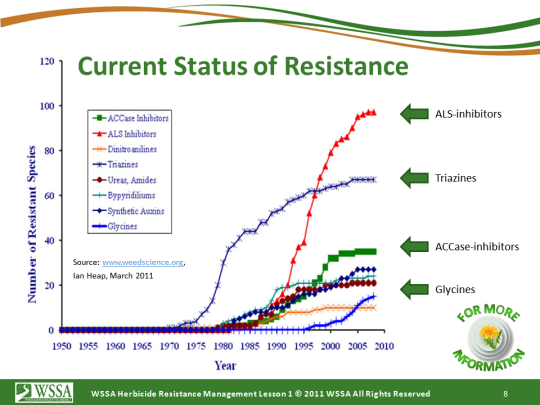 Picture from the Weed Science Society of America

Currently, the most common GMO crop is the RoundUp Ready GM Corn produced by Monsanto. According to the most recent FDA report on GMOs in the USA, 85% of corn production in the USA is “herbicide tolerant” (I.E. it has been genetically modified to pair with glyphosate pesticides).

GMO corn currently uses glyphosates to kill all pests that would normally grow in the corn field alongside the crops. Unfortunately, it appears that the GMO manufacturers anticipate a need to increase the power of the pesticide paired with their crop so that they will remain effective.

The new pesticide paired with GM corn is 2,4-d, which is best known for being the “less-toxic” component of the now-infamous “agent orange” defoliant agent used during the Vietnam war.

Originally, developed during WWII as a chemical weapon (that was never employed), 2,4-D entered the private market in 1945. It was marketed as an effective, safe and cheap weed killer that could be applied by untrained individuals. Eventually, it became infamous for its inclusion in the deadly chemical defoliant “Agent Orange,” used to destroy Vietnamese forests during the Vietnam War.

Currently, 2,4-d is used as an agricultural herbicide, on golf courses/parks, and is sold as a consumer pest control. It is seen as one of the less toxic chemical pesticides and is easily accessible.

According to the official NPIC fact-sheet, 2,4-d can cause renal failure if the amount consumed exceeds the filtration capacity of the kidneys. “Dose-dependent toxic effects include damage to the eye, thyroid, kidney, adrenals, and ovaries or testes. In addition, researchers have observed neurotoxicity, reproductive toxicity, and developmental toxicity.” Finally, 2,4-d causes endocrine disruption disorders and, according to some studies, is linked to cancer and neurodegenerative diseases like Parkinson’s.

In short, 2,4-d can cause serious damage to multiple vital systems in the human body if it is applied in significant doses. It can be inhaled, consumed, absorbed through mucus membranes, or even absorbed through the skin.

Dow Chemical has started to produce GMO corn and soybeans that are resistant to 2,4-d. These crops have been approved by the USDA (here is a link to their 2013 petition to the USDA) but have yet to actually reach the market. This approval occurred despite significant outcry from environmentalists, concerned citizens, and even medical professionals (here is a link to a letter signed by 70 doctors imploring the USDA to reject Dow’s request for approval).

The resistance to 2,4-d gained by GMO crops will allow farmers to deliver massive doses of the pesticide to their fields in order to ensure that the only things growing are their crops.

Here are pictures from a National Academy of Sciences study on Dow Chemical’s 2,4-d tolerant corn (picture 1) and soybeans (picture 2): 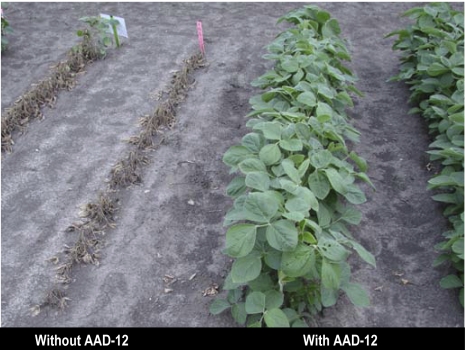 In this study, 2,4-d was applied to the field at a volume that would kill any plant that has not been designed specifically to tolerate such a high dose. The corn and soybeans modified with the AAD-12 gene—an enzyme that degrades 2,4-d in the plant, thus rendering it far less harmful—survived while every other plant was absolutely devastated. According to the FDA’s analysis of the AAD-12 gene, it is degraded during digestion and doesn’t have any identified health consequences in and of itself (although current no tests have involved exposing large populations to large quantities of the gene).

While many farmers may see such a test as a very positive result from the standpoint of ensuring that their crops aren’t overrun by pests, there are some real dangers inherent to these results.

First, there is little guarantee that the pesticides sprayed on the crops at extremely high volumes will be washed off before the crops are sold—this creates the danger of exposing consumers, including the chemically sensitive, to extremely high doses of pesticides.

In the past, 2,4-d has been marketed as safe because it isn’t used in doses that cause acute harm to the average human being (although studies have shown that there are dangers inherent to chronic exposure). The development of GMOs that tolerate 2,4-d allows farmers to use far larger quantities of the chemical  than are common today (volumes that would defoliate even commercial golf courses that currently use large quantities of 2,4-d), thus increasing the danger that consumers will be exposed to dangerous doses.

Second, there is the reality that using such large quantities of a powerful herbicide will inevitably lead to a precipitous drop in biodiversity. 2,4-d is designed to kill plants, and it does its job well. Applying massive amounts of 2,4-d will (as shown in the photos), kill virtually every plant in the area, including non-pests. The liquid runoff and aerosol drift of 2,4-d will cause immense damage to the ecosystems surrounding farms that grow these crops and may very well render large areas fallow except to GMOs designed to tolerate 2,4-d.

Finally, the problem of evolved immunity to pesticides isn’t solved by shifting to 2,4-d. In fact, it may make the situation worse. Just as antibiotics breed resistant diseases, pesticides breed resistant pests and, just at the solution to antibiotic resistant bacteria isn’t always just a more powerful antibiotic, the solution to resistant pest may not be upping the power of the pesticide. When pests become resistant to 2,4-d, we will have to up the ante again…and again…and again, until we are forced to deal with the pest equivalent to MRSA (multiple-resistant staph infection). Once this happens, we will be unable to kill the pests without using seriously toxic chemicals that have even worse effects on human health and the environment than the pesticides we use today.

According to the International Survey of Herbicide Resistant Weeds, there are currently 437 confirmed cases of pesticides breeding resistant weeds. These accumulated resistances have reduced the effectiveness of 155 different herbicides and have involved virtually every class of chemical pesticide.

The most effective methods of reducing the dangers of pesticide resistance are to use a mixture of pest-control methods and not relying on mono-cropping farming. Shifting to a slightly more powerful pesticide, or pesticide cocktail, is a temporary fix that just covers up the real problem until it can remerge at a later date, with fewer options as to how to fix it.

It is the duty of the FDA and USDA to protect the American people from the potentially damaging actions of corporations. Dow and other GMO/pesticide manufacturers stand to gain large profits from the sale of GMO seeds (they sell both the seeds and the chemicals used on the plants), but the short-term economic gains of these corporations and farmers will likely counterbalanced by long-term harm to our environment and an increased danger to the health of consumers. As such, activists need to continue working to ensure that public officials reconsider their choice to approve these GM crops before real damage is done.

8 thoughts on “2,4-D Resistant GMO Crops Appear Imminent, What are the Dangers?”