Last Saturday (12/20/14), a New York resident named Ismaaiyl Brinsley executed two police officers—Wenjian Liu and Rafael Ramos—at point-blank range while they sat in their parked police cruiser. As far as we can tell, this was not a result of a personal grudge between Brinsley and the officers, but rather a random act of anti-police violence by Brisley.

Before the shooting, Brinsley posted numerous anti-police sentiments online—including an Instagram post that morning which said that he was going to put “wings on pigs today” in retaliation for the Eric Garner killing. 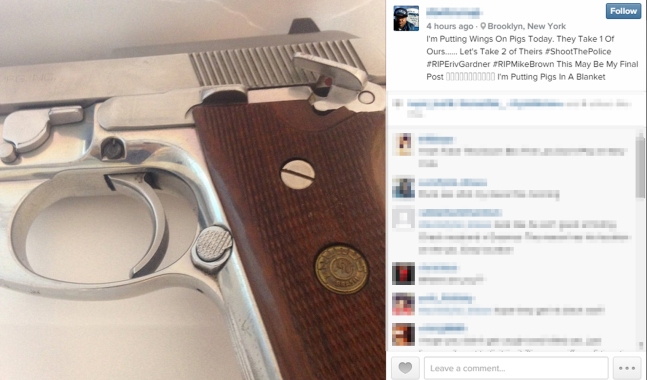 After the shooting, Brinsley was pursued by police down into a nearby subway station, where he turned the gun on himself and took his own life. The gun was recovered at the scene and there is virtually no doubt that he is guilty.

In response to the shooting, the police have railed against Mayor De Blasio and the protesters who flooded the street after the refusal of the grand jury to indict the police officer who murdered Eric Garner with an illegal chokehold (at least, according to police regulations and the medical examiner).

First and foremost, I have a lot of sympathy for the police officers who were killed and condemn any violence against any group, including the police. The police are a necessary part of any society and should not face the threat of such extreme violence while doing their jobs.

That said, the police have long failed to realize that people can only be pushed so far before something snaps (that “something” usually being the least balanced and rational people in society). For years, the NYPD have “stopped and frisked” minorities with impunity while completely disregarding the feelings of the community. This long-term tension set the stage for conflict with police, while the recent cases of Michael Brown, Eric Garner, and Tamir Rice created a powerful catalyst for extreme reactions—in short, many Americans have lost faith in the justice system being fair to people like them and are no longer willing to take it lying down.

The failure of prosecutors to even get indictments when police have killed young black males, under extremely suspect circumstances (when over 95% of indictments go through), has given the perception that police officers have the right to kill at will. In this situation, people who are both disenfranchised and without a good degree of impulse control can become extremely dangerous to anybody who they can blame for their helplessness.

In short, when people don’t have faith that they can get justice, they often turn to blind and destructive revenge—this can take the form of riots, the murder of police, vigilante justice, or even assassination attempts against lawmakers.

“A riot is the language of the unheard.”

If police departments don’t want this kind of violence to be directed at random police officers in the future (not excusing the perpetrators of that violence), they must take steps to punish those who abuse their power. The perception that the police are an occupying force rather than a protective force will inevitably lead to more violence and the only way to fix such a perception is by ensuring that police officers who break the law are punished within the law. Officers who murder citizens should face a jury of their peers, rather than a fixed grand jury that renders a secret preemption of a fair trial.

Additionally, the idea that the NYPD is blaming De Blasio for this shooting, simply because he has shown a willingness to call them out when they violate peoples’ rights, is both wrongheaded and an offensive attempt to turn a tragedy into a political weapon (a la neocons using 9/11 to attack Democrats). People aren’t angry at the NYPD because De Blasio pointed out that the NYPD is abusing their authority—they already knew that because they were living it. This effort by the NYPD to tar De Blasio with blame this murder is an attempt to turn this tragedy to a previous political effort and is an offense to the memory of the dead officers.