Over the last several decades, the economic narrative of the American right wing has devolved into a nonsensical series of unsubstantiated assertions. This devolution of conservatism from an ideology that acknowledges economic realities to one that prefers to make up its own “facts” to justify its predetermined assumptions is extremely damaging. The American people, in aggregate, have a shockingly low knowledge of economics, thus the delusions of the right wing are often taken as fact by the voters and used to justify bad choices.

In the following article, I will quickly debunk three of the most pervasive of these assertions:

The most basic underlying assumption for the right wing’s economic argument is that the free market can efficiently allocate resources, promote technological development, and fairly distribute profits to society’s workers. They believe that the government should stay out of the economy in order to let the “invisible hand of the market and voluntary associations of individuals decide every economic outcome—the people who prosper can accrue as much wealth as the market allows while those who fail are left to live in abject poverty.

In effect, the right wing now champions a version of the 20th Century neoclassical economic theory, fused to a vicious strain of the Ayn Randian cult of individualism, and piloted by corporatists. They want to shrink government to the point where it cannot regulate industry, while cutting social spending to the bone and privatizing everything that survives the cut. The money that is freed up from these cuts is given to the rich out of the hope that they may deign to invest in the USA and create jobs (without a minimum wage or ability for workers to unionize).

Unfortunately, this ideology would create an era or neo-feudalism in the United States. The inability of the government to regulate the market would lead to widespread fraud, corporate monopolization, and exploitation by those with the most resources. Average Americans would end up working long hours, for extremely low wages, while living in a polluted wasteland and having no ability to secure a high-quality education for their children. 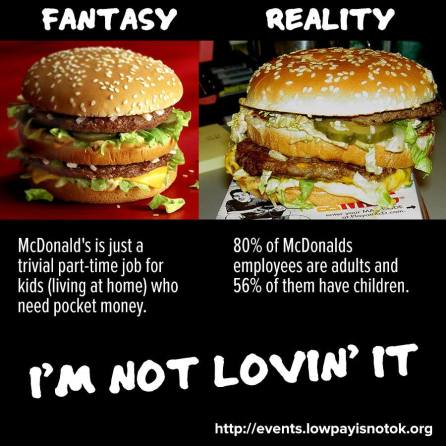 There are four major flaws in the market reliance of the right wing:

First, it is a mistake to assume that all commerce is in a “market.” In order for a free market to be created, there must be trade between numerous buyers and sellers, with similar levels of information, no compulsion to buy or sell, and no barriers to entry. Obviously, these are fairly difficult, if not impossible, criteria for most markets to meet. For example, health care isn’t a free market because there is no symmetry of information (you don’t know what you want to buy and have no ability to compare prices between sellers) and intense compulsion to buy (if you are hurt in an accident, you are forced to enter the market at any price, or die). Despite this, some people insist on using “free market” solutions to the healthcare crisis in the USA, leading them to pass completely ineffective policies.

Second, the market is highly dependent upon government intervention to prevent cartels and monopolies from destroying competition. Additionally, the government is necessary to ensure that consumers aren’t defrauded by producers who have more information than them (ex. a contractor who buys cheap material to save money, then sells the property to somebody who doesn’t know that it is sub-standard).

Third, the free market cannot effectively regulate externalities (ex. pollution), nor can it prevent them from harming people before the fact. At best, the market can allow a boycott if some industry starts causing harm—there is no legal restraint that prevents the corporation from continuing the damaging action, nor is there a guarantee that the boycott will have any effect.

Fourth, the market is unable create the infrastructure that makes society possible (ex. who pays to educate the children). In a market-based society, vital pieces of infrastructure would either be pay-for-use (thus inaccessible to those who lack resources) or non-existent. Roads, bridges, schools, police/fire services, and every other public institution that makes society livable would only be accessible to those with resources, and the economy would grind to a halt (after all, what kind of economy exists when the children aren’t educated, travel is expensive, and private security forces are the only source of law and order).

The absolutism of the right wing’s focus on markets is the path towards the creation of an American Somalia. The government serves a vital role in society and the idea that the market is perfect is one that is only acceptable for people who have taken a couple weeks of an intro to microeconomics class.

Supply-side economics (AKA “voodoo economics”) is the belief that cutting taxes necessarily creates growth in the economy because it frees up private capital that will be invested by individuals rather than wasted by the government. Since the Reagan Administration, this has been the dominant economic paradigm within the right wing establishment. Unfortunately, it is completely wrong and a major part of why our government owes so much money.

It is true that tax cuts can stimulate economic activity in some situations, but extrapolating this over the entire economy is simply wrong. Giving the poor and the middle class more resources causes them to spend more and stimulate the economy because it allows them to buy things that they need—probably the best example of this is the SNAP program. Conversely, giving money to the rich causes them to save it or invest it overseas (where a larger profit can be made), which has virtually no benefit for America as whole.

When the right wing proposes tax cuts, they focus on the top income brackets (thus the trickle-down analogy) under the justification that those are the “investors” or “job creators,” while ignoring those in lower income brackets. This is the exact opposite of what would be effective and serves only to redistribute wealth upwards. 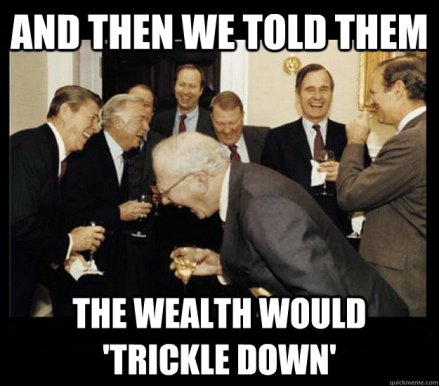 In effect, supply side economics is just an excuse for corrupt millionaires in office to give their billionaire patrons more money, while convincing the starving proles that they are benefitting from the exchange.

What America really needs is called countercyclical Keynesian stimulus. This involved the government spending money to create middle class jobs in order to build the national infrastructure. These jobs pump money into the lower and middle classes, which dramatically increases aggregate demand and leads to private sector job growth. As the economy picks up, the stimulus ends and taxes are increased on the top income brackets so that the money borrowed during poor economic times can slowly be paid back.

Industries can Regulate Themselves

Put simply, this is absolute bullshit promoted by the industry owners so that they can exempt their businesses from any restrictions that reduce profitability. In 2008 we saw what happens when the banks are allowed to regulate themselves and we still haven’t recovered from the experience.

Historically, the United States was a nation where industry self-regulated and the results were intolerable—children were working in coal mines, polluted rivers caught on fire, poisons were sold as medicine, and a whole host of other problems plagued society. To fix these problems, the American people created regulatory agencies. While it is certainly true that these agencies complicate business, have made mistakes in the past, and necessitate an inordinate amount of red tape, these are small prices to pay for the improvements that they have caused.

Unfortunately, the regulatory agencies did their job too well and the American people have largely forgotten about what things are like when regulation is left up to for-profit industries. They see the red tape and hear the assertions by the industry lobbyists that there would be more jobs and higher pay if only the industries are deregulated, while having no historical context to assess those claims with.

Overregulation is a problem in some cases, but the solution to that problem is not simply to go to the other extreme and let business self-regulate. The proper regulatory process is to use impartial research and study to determine what regulations are necessary to protect society, then to use the government’s monopoly of force to strictly enforce those rules.