Ted Cruz Announces Doomed 2016 Candidacy, A Test for the Birthers

On Monday, Ted Cruz announced his intention to run for the 2016 Republican presidential nomination, becoming the first GOP candidate to “officially” announce his candidacy. He made his announcement in front of thousands of students at Liberty University, completely skipping the kabuki-theater of “exploratory committees” that most candidates put the rest of us through (ex. Hillary Clinton and Jeb Bush aren’t “officially” running for president yet, despite their recent fundraising pushes, establishment of election infrastructure, and blatant campaigning). 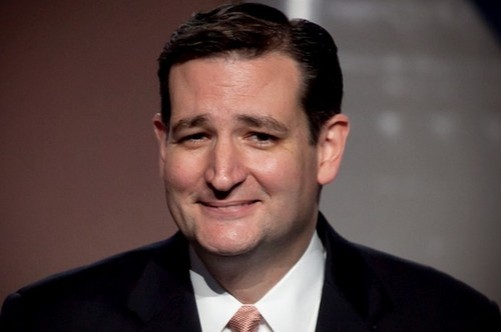 At the end of the day, Ted Cruz is an extreme long-shot in the 2016 GOP primary season for three major reasons: First, Cruz is despised by many Republicans for his grandstanding, self-promoting political stunts (ex. precipitating the government shutdown), and willingness to build his name by deriding his fellow Republicans. At every opportunity, the Republicans who Cruz has slighted will stab him in the back by publically supporting his opponents and leaking criticisms that undermine his campaign. Second, Cruz’s fundraising infrastructure is completely dwarfed by those of his opponents, particularly Paul, Bush, Christie and Walker. Like it or not, but money has real power in modern politics and Cruz’s opponents will likely drown him in a flood of advertising. Third, Cruz has absolutely no appeal outside of the extreme fringe of the right wing base. Any marginally competent political strategist on the Republican side will fight against a Cruz candidacy, if only because his victory in the primary would turn the general election into an uphill battle in a mudslide. 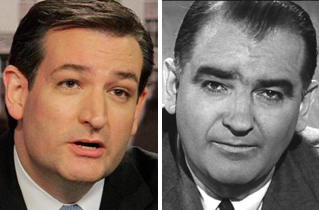 It may be a cheap shot, but the fact remains that Cruz has a freakish resemblance to Joseph McCarthy.

Regardless of Ted Cruz’s nonexistent chances at the presidential nomination, his candidacy does give us an interesting opportunity to settle a highly-contentious argument that dates back to the early years of the Obama Administration: are the birthers just ignorant of the law, or are they racists?

When Obama was elected president in 2008, he faced an unprecedented form of delegitimization, where large numbers of right wing activists and elected officials spent prohibitive amounts of time questioning his citizenship and constructing wild conspiracy theories—these individuals became known as the Birthers. There were several waves of birther insanity, each with increasingly desperate rationalizations to justify their accusations. In the beginning, the birthers tried to argue that Obama was born in Kenya instead of Hawaii. They demanded over a period of months that Obama produce his birth certificate. After Obama produced his certificate of live birth from Hawaii, these demands shifted to focus on the “long-form” birth certificate. Additionally, the Birthers began claiming that even if Obama was born in the USA, to an American mother, he wasn’t a “natural born citizen” because his father was a Kenyan citizen who could have passed his Kenyan citizenship onto his son. After legal experts derided them for this argument, the Birthers began to demand Obama’s educational transcripts (ostensibly to see if he was a foreign student). Eventually, these accusations became so transparently contrived that they became limited to the right wing fringes and idiot-milking mechanisms that sell conservatives the same four books by ultra-conservative authors (ex. O’Reilly, Coulter, etc.) over and over again by changing the titles slightly. Currently, the birthers are virtually non-existent as a group because other false controversies (ex. IRS, Benghazi, etc.) have overshadowed birtherism in the right wing outrage chamber. During their crusade, the Birthers deflected all criticisms that they were racists who were just unable to accept a black man as a “real” American by hiding behind the law. The Birthers argued that they just cared about upholding the constitutional requirements for serving as president and that their beliefs were in no way partisan or racially motivated.

Now that Ted Cruz has declared his intentions to run for president, the Birthers will get a chance to prove their true motivations: if they mobilize again and put up a strong opposition to the Ted Cruz candidacy under their old anti-Obama arguments, they will have shown themselves to be principled—albeit ignorant of the law and obnoxious.

That said, if the extreme right ex-Birthers align behind the ultra-conservative Cruz candidacy, they will have proven our accusations true, and revealed themselves as either racists or unprincipled partisans. Like Obama, Ted Cruz is the son of an American mother and a father who has roots outside of this country. Cruz’s father, Rafael, grew up in Cuba but moved to Canada after the rise of Castro, where he met his wife. Ted Cruz was born in Canada, giving him Canadian birthright citizenship, but his mother’s status as an American citizen also transferred over. Ted Cruz has held dual Canadian/American citizenship for most of his life, but he renounced his Canadian citizenship this month, immediately before declaring his intentions to run in the primary. In effect, Ted Cruz embodies the paranoid accusations of the birthers: his father was a foreign national, he was born outside of the USA, and he has been a citizen of a foreign nation for decades. While Cruz can legally run for president because his mother was a US citizen who conveyed US citizenship to him at birth, the same can be said for Obama, yet the Birther outrage was undiminished. If the ex-birthers accept Cruz’s (correct) argument that he is a “natural born citizen” simply because his mother was an American citizen at his time of birth, it will represent awe-inspiring hypocrisy. There are only three explanations for this type of hypocrisy:

Personally, I have very little doubt that the extreme right will prove themselves to be hypocrites in regard to the Cruz candidacy. While they may not vote for him, they will fall in line and not question his legitimacy. Only time will tell.

4 thoughts on “Ted Cruz Announces Doomed 2016 Candidacy, A Test for the Birthers”