Abstract: The scientific community has reached consensus that anthropogenic climate change is an imminent crisis that will impact billions of people worldwide. An increase in the global aggregate temperature threatens to disrupt weather patterns while simultaneously increasing the sea level and the frequency/severity of potentially-fatal disasters. Given the extreme scope and severity of this global threat, it is important for the world’s disaster response organizations to prepare and utilize only the most effective organizational structures and management tactics. In this review, I will summarize the current literature focusing on the most efficient management reforms needed to mitigate disasters that will be worsened by climate change, including persistent flooding, droughts, and extreme storm activity.

In the mid-20th Century, scientists started observing a noticeable increase in the global mean temperature and a corresponding increase in extreme weather events. After studying these phenomena, they have come to the consensus that they are caused by human actions, primarily the widespread use of fossil fuels and industrialization of production (IPCC, 2014).

The largest study of anthropogenic climate change is by the Intergovernmental Panel on Climate Change [IPCC], which was created by the United Nations to deal with the issue. According to the most recent version of IPCC’s study (edition 5, 2014), human action is thickening the atmosphere with carbon emissions and enhancing its ability to trap heat energy—this results in the average temperature increasing across the globe.

When the world gets warmer, polar ice diminishes and the oceans are flooded with large quantities of fresh water that were previously frozen (also releasing ancient CO2 that was locked in bubbles in the ice). Meltwater not only increases the sea level but also decreases the salinity of the ocean and disrupts ocean currents (IPCC, 2014).

The combination of increased sea levels, disrupted ocean currents, and a warmer atmosphere creates a variety of serious problems for humanity. Weather patterns are disrupted and extreme weather events are made even more extreme. Some of the more dangerous consequences of this disruption include droughts, which cause famines and conflicts over resources, persistent flooding along coastal areas, increased storm activity, and even the complete displacement of populations from their homes (ex. the Pacific island nation of Kiribati will be completely swallowed by the ocean).

The increase in the frequency and severity of natural disasters associated with climate change necessitate a response by disaster management agencies. This response includes the development of new technologies, social policies and energy sources, but it also requires emergency managers to adapt their agencies to the new crises and utilize best practices in emergency management.

After reviewing a selection of the available literature on this subject, I have come to several conclusions…

First, that much of the literature agrees that there are four major stages in the climate change disaster management effort:  mitigation, preparation, response, and recovery (Frietag, 2007; McGuire, 2010; Zmarak, 2009; IPCC, 2014).

Second, that there are several agreed upon strategies that can be implemented by public managers at each point in this effort to reduce the damage from climate change fueled disasters

In this paper, I will present a summary of the most important practices in each of the first three stages of this effort—mitigation, preparation, and response—as determined by the existing literature from scholars in emergency management. This will focus specifically on the steps that can be taken by managers in developed nations, like the United States. 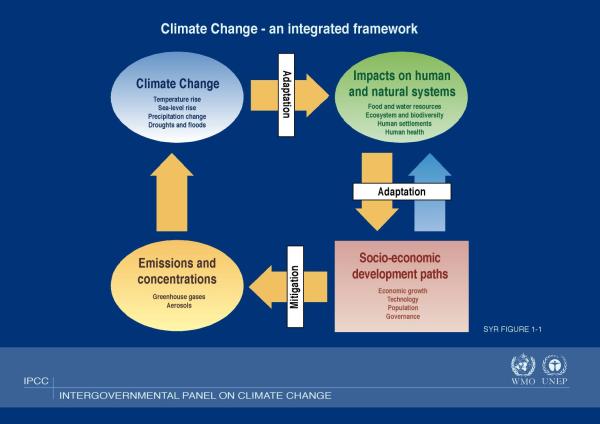 The general consensus of the emergency management community is that mitigation is the first line of defense against the natural disasters that climate change will bring. Mitigation involves reducing the costs of climate change disasters by bringing the drivers of the underlying climate changes under control (Briggs, 2012; Freitag, 2007; Wilbanks, 2010; Zmarak 2010).

There is near-universal agreement that federal and state regulators and resource managers must immediately begin reducing the allowable amount of carbon pollution to be legally released into the atmosphere (IPCC, 2014; Briggs, 2012; Freitag, 2007; Wilbanks, 2010; Zmarak 2010). This is a necessary step because it will reduce the severity of climate change and would likely dramatically reduce the frequency/severity of ensuing disasters.

Reducing the carbon output of human activity will require not only reforms in energy regulation (ex. phasing out coal-fired power plants) but also dramatic changes in the regulations governing farming, transportation, and housing efficiency. This effort will require a multi-front effort by administrators in numerous regulatory agencies and would likely also require cooperation from the federal legislature.

Unfortunately, it appears that it is too late to avoid all of the disasters that will be exacerbated by climate change (IPCC, 2014), but immediate action in this sector of public management can reduce the stresses that others are forced to deal with.

As completely mitigating climate change is no longer possible, additional steps must be taken.

“Mitigate and where you cannot mitigate, prepare, respond and recover.”

In addition to reducing the severity of climate change, public managers must harden communities—using all levels of government—to the likely disasters. There are several ways that managers can do this, including the following:

City planners and managers in coastal areas must plan new construction around the predicted sea level increases so that persistent flooding is less common (Pizarro et al., 2006; Freitag. 2007). This will reduce the burden of dealing with property damage after disasters through ensuring that new buildings are not built in unsustainable areas (ex. some areas of the Florida coast). Regulators and other public managers are necessary in this situation because short-term profit motives may lead the private sector to build unsustainably for a short-term profit, leading to long-term social costs for unsuspecting buyers.

In some areas, where disasters are more easily predicted, risk reduction strategies—like clearing brush that has the potential to fuel wildfires or building levies to stem floods—can be also implemented by these city planners to reduce the danger to vulnerable areas that are already populated (Pizarro et al., 2006; Freitag 2007). These measures are often expensive, but they tend to be less expensive than paying for the damage after a disaster (Zmarak, 2010; Pearce, 2013).

Emergency management agencies must ensure that they have proper stores of supplies within easy access, established protocols for distributing these supplies, and the capacity to deal with every likely disaster within their jurisdiction (Dobel, 2010; Briggs, 2012; Wilbanks, 2010). This will facilitate fast and efficient reactions when a disaster actually occurs.

Communication networks must be established that facilitate coordination between emergency managers at the local, state, and federal level. Several authors (Dobel, 2010; McGuire, 2010; Pearce, 2013) make the point that breakdowns in communication are immensely damaging to disaster response efforts, thus it is extremely important to establish resilient and effective coordination networks before a crisis stresses the system.  Dobel (2010) specifically goes into the creation of these networks, where he suggests the establishment of multiple, redundant, media alerts, facilitated by individuals who have received in-depth training in acting under pressure. Additionally, he argues that these networks should be standardized or, at minimum, compatible between jurisdictions so that disasters which affect large areas do not create conflicts between emergency management strategies (Dobel, 2010).

Prediction models and paradigms must be adapted to deal with the coming crises (Briggs, 2012; McGuire, 2010; Pizarro et al., 2006; Wilbanks, 2010). There is agreement in the scientific community that climate change will result in extremely complex and damaging problems for human life and established ecosystems—many of these problems feed into one another (ex. increased sea levels exacerbate the damage from coastal storms) and create very unpredictable crises. Not only will climate change increase the severity of existing disaster patterns (ex. hurricane activity in the Southeast USA), but it will also create new disaster patterns in areas that were previously secure. For example, shifting storm patterns could afflict inland communities with flooding, despite the fact that those communities previously suffered primarily from drought or wildfire related problems.

In order to deal with these shifts in disaster patterns and the increase in uncertainty, emergency managers must put increased focus on prediction and adapt disaster management models to deal with a more uncertain series of crises (Briggs, 2012; Frietag, 2007; McGuire, 2010; Zmarak, 2009).

More resources must be directed by managers into the divisions of their organizations that deal with developing new contingency plans and disaster prediction models (Briggs, 2012; Dobel, 2010; Zmarak, 2009). This increased funding will allow organizations to shift from dealing with relatively predictable disasters to dealing with a much less predictable pattern of crises. If this is not done, there is a very good chance that disasters will cause damage that could have been mitigated if they could have been foreseen.

In addition to increasing funding for prediction, there is agreement that emergency managers will need to utilize a “multiple-threat adaptation” model, where agencies become capable of dealing with multiple, dramatically different, crises simultaneously (Wilbanks, 2010; Briggs, 2012). This requires a shift towards what Briggs (2012) refers to as a “risk assessment” model that doesn’t just rely on predicting disasters, but also analyzing vulnerability in infrastructure and capacities of local disaster management agencies.

Once disasters happen, emergency managers must respond quickly while coordinating efforts between all levels of government, as well as with the private sector.

As previously mentioned, efficient communication is paramount to an effective disaster response. Local volunteers and emergency managers should be in constant contact with state and federal agencies, as well other local agencies being affected by the same disaster (Dobel, 2010; McGuire, 2010; Pearce, 2013) As pointed out by McGuire (2010), disasters are almost always multi-jurisdictional, thus creating strong ties between jurisdictions is necessary to ensure that different disaster management efforts are not wasting resources or working against one another. Dobel (2010) specifies that the solution to this jurisdictional problem is the creation of interstate compacts which cover entire areas that are at risk from similar disasters (ex. the Gulf communities and hurricanes). Zmarak (2010) and Pearce (2013) add to this by arguing that the costs associated with responding to disasters are usually higher than those associated with adapting, and that they can be beyond the capacity of local governments—this suggests that it will be necessary for federal and state agencies to provide the bulk of the funding for local relief efforts.

The media is part of the private sector, but is also a vital entity during a disaster response. People who are affected by disasters need to have access to information about relief efforts and they will most likely rely on local media as a source. Because of this, it is vital that media outlets be a part of the response, and have real-time access to the most current information on the relief efforts (Dobel, 2010).

No one strategy is adequate to contain the predicted damage from climate change related disasters. Public managers will have to use a combination of mitigation, adaptation, and response in order to create an effective and sufficient disaster management regime. These reforms would, ideally, be made simultaneously, through cooperation between the many levels of government, and in the very near future.

One persistent narrative common to all stages of disaster management mentioned in this paper (mitigation, adaptation, and response) is the need for constant communication between all relevant parties. Regardless of the task, most academics agree that it is necessary for federal, state and local authorities to put aside jurisdictional conflicts in favor of working towards the common goal of protecting their constituents.

Unfortunately, while there is a great deal of agreement as to WHAT must be done by managers, a combination of political posturing, short-term thinking, organizational fragmentation, scarce resources and a lack of public will have made it difficult for actual reform to happen in the United States (Burnett, 2011). If this doesn’t change, the prognosis is fairly grim and the consequences will likely be immense.

Wilbanks et al. (2010). Beyond Adapting to Climate Change: Embedding Adaptation in Responses to Multiple Threats and Stresses. Annals of the Association of American Geographers, Vol. 100, No. 4, pp. 719-728.

Zmarak Shalizi and Franck Lecocq. (2010) To Mitigate or to Adapt: Is that the Question? Observations on an Appropriate Response to the Climate Change Challenge to Development Strategies. The World Bank Research Observer, Vol. 25, No. 2, pp. 295-321.

One thought on “Disaster Mitigation, Adaptation and Response in a Post Climate Change World”