In the coming two weeks, the Supreme Court will deliver three incredibly important rulings that could potentially have wide-ranging consequences for our nation. At best, they could set to rest judicial attempts to destroy the Affordable Care Act, reaffirm anti-segregation protections, and establish the strongest constitutional protections for gays in the history of our country. At worst, they could throw millions of Americans off of their healthcare, fundamentally undermine racial anti-discrimination laws and facilitate anti-gay discrimination. 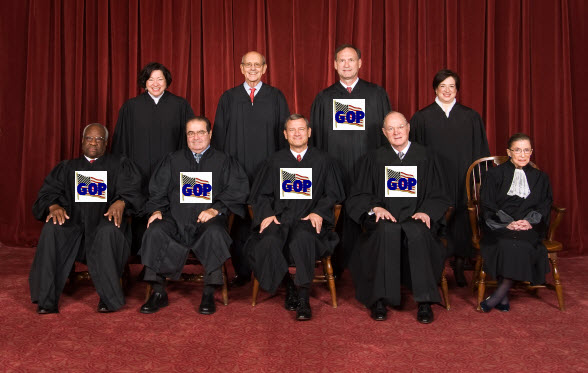 While we don’t know exactly when these rulings will be delivered (the SCOTUS keeps that information secret), they could be announced as early as tomorrow (6/18/15) at 10AM. If a decision is announced, it will be posted on ScotusBlog in real-time.

Unfortunately, given recent decisions by the Supreme Court (ex. essentially legalizing corruption with Citizens United, eviscerating the Voting Rights Act with Shelby County, etc.), there is a very real danger that the Supreme Court will deliver disastrous rulings on at least two of these cases. While I predict that the Supreme Court will comfortably affirm gay rights by a 6-3 margin, I am much more worried about the ObamaCare decision (possible 5-4 split in either direction), and extremely pessimistic about the anti-segregation case (likely 5-4 or 6-3 decision striking down protections).

Likely the most famous of these three cases, the Burwell case is the most recent attack on ObamaCare by the right wing. It is based around the argument that the designers of the law never intended to let the federal government subsidize exchanges that it creates for states that refuse to cooperate with the law. Under their reading of the law, only exchanges set up by the states would receive subsidies—as 34 states are run by GOP extremists looking to nullify health care reform, thus refused to set up a state exchange, this means that a vast majority of states would lose their subsidies.

Put simply, this argument is ridiculous and should never have reached the SCOTUS. It is, at best, based off of an irrelevant typo in one sentence of a reams-long law that is clarified numerous times in other provisions. The drafters of the ACA are on record saying that they never intended to let state governors deny their constituents subsidies by refusing to set up exchanges, and other sections of the law use federal and state subsidies interchangeably.

The ramifications of this case cannot be understated. If the SCOTUS strikes down these subsidies, average premiums in states with federal exchanges are predicted to increase by a minimum of 132% (Arizona) all the way up to a maximum of 650% (Mississippi). These massive price increases will force millions of Americans to leave the insurance pool, likely losing any affordable access to insurance. This exodus from the insurance pool will be concentrated in the healthiest populations (ex. healthy adults), leaving only the sickest individuals who cannot afford to leave (ex. cancer patients). As insurance is based around spreading risk around, this concentration of high-cost people in the insurance pool will destabilize the system and lead to runaway price increases.

I predict a better than even chance that the SCOTUS will uphold the legality of these exchanges, either by a 5-4 or 6-3 margin. Thomas, Scalia, and Alito are pretty much lost causes and will vote against the law on reflex, while the four “liberals” made it clear in their questioning that they support the law. Kennedy and Roberts are both wild-cards that I think are leaning towards the liberal side of the court—Kennedy appeared very dubious about supporting the level of compulsion that the removal of the subsidies would put on the state, while Roberts likely recognizes that a destruction of the ACA would solidify his court’s status as a historic partisan embarrassment.

This case has flown largely under the radar—overshadowed by the more famous ACA and gay marriage cases—but it is arguably the most important in the long term. It centers on the constitutionality of “disparate impact” provisions within the Fair Housing Act, but could have dramatic consequences for all laws that utilize such provisions.

The USA has a truly horrible history of racism, segregation and discriminatory conduct. Much of this has been extremely overt, but recent decades have seen racism try to hide under a cover of “neutral” policies. The disparate impact provision within the Fair Housing Act simply states that developers and mortgage lenders can have their actions scrutinized for their IMPACT, not just to see if there is any overt discrimination involved in the process.

While this sound complex, it is actually very simple to understand with examples: Without disparate impact provisions, it is possible for ill-intentioned politicians to design zoning laws that segregate low-income housing into small pockets of poverty (ghettoes), just as long as they don’t overtly say that their intent in doing this is to drive poor black people out of white neighborhoods. With disparate impact provisions, we don’t just look at the stated intent of a policy, but also the real impact, thus such plans would be blocked due to their discriminatory impact

This case specifically deals with a challenge to the Texas Department of Housing and Community Affairs’s decision to allocate almost all of its housing assistance money in majority-minority areas. The concentration of these credits in majority-minority areas would segregate low-income residents, and make it very difficult for them to access housing elsewhere—it would also ensure that the average wealth in those areas is low, and reduce the funding to local schools (through decreasing property taxes). This discriminatory impact was noticed by a local community group, challenged in court and blocked. Despite losses in earlier courts, the TX DHCA kept appealing until the case was taken up by the SCOTUS.

A map of Charlotte from the pre-civil rights era, where “red-lined” districts restricted where blacks could live and where they couldn’t.

Strangely enough, the swing vote in this case is almost certainly going to be Justice Scalia. While the conservative block and Kennedy are almost certainly going to vote in favor of invalidating disparate impact protections and the liberal block are unified in supporting it, Scalia was fairly antagonistic against the plaintiffs during oral arguments. Unfortunately, I am extremely cynical about Scalia’s ethics and sympathies, and would argue that there is a very good chance that he sides with his fellow conservative. He voted against similar types of civil rights protections for voting in the Shelby County v. Holder case, and there is little chance that his heart has thawed in the time since that decision.

If the court strikes down the concept of disparate impact in this case, it will not only allow zoning boards and mortgage lenders to implement discriminatory policies, but could also have a ripple-effect into other areas of civil rights. For example, “neutral” tests of physical ability could be used to restrict disabled Americans from jobs that don’t actually involve physical activity.

This case promises to be a landmark gay-rights case that will either confirm or deny a states’ “right” to deny same-sex couples equal marriage rights. In effect, it will either create a federal standard that guarantees all same-sex couples equal marriage rights, regardless of what their state officials say, or will grant state officials the power to decide what rights to give gay couples.

The Hodges case originated in Ohio, but it has been combined with several other cases from different states on the same subject (ex. DeBoer v. Snyder in Michigan). While the case is highly contentious, it hinges upon a very simple question: “does the Constitution establish equal protections for gay people that should prevent states from denying them equal marriage rights?” 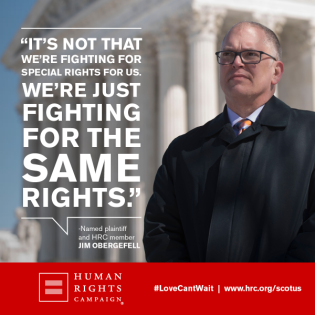 I predict that the SCOTUS will establish equal marriage protections for same-sex couples by a 6-3 margin. The “liberal” side of the court will join Roberts and Kennedy to strike down the Ohio law (and, by extension, all similar state bans), while the conservative block will likely be limited to penning an incendiary dissenting opinion (probably written by Scalia).