This is part #4 of my Refuting Anti-Abortion Talking Points series. For the previous three parts you can follow the following links: Part #1, Part #2, Part#3

While these claims may sound plausible, they are simply not supported by the facts. Studies have regularly debunked each of these claims and have, in fact, found that an abortion is actually less likely to have negative health consequences on the mother than a natural birth.

First, the assertion that abortion will lead to negative physical health consequences—most commonly sterility, breast/uterine cancer, or even death due to medical error—is simply false. These are myths created by the anti-choice movement to use as scare tactics and have been debunked by reputable sources. Unfortunately, they are extremely common in so called “crisis pregnancy centers” that many states have required women to attend before accessing abortion services, and are just plausible enough to be frightening.

Peer-reviewed studies have indicated that abortion procedures are overwhelmingly safe, and far more so than childbirth. The mortality rate of abortion procedures is approximately .6 deaths per 100,000 (.0006%), while the birth mortality rate is approximately 8.8 deaths per 100,000. This is even more extreme for early-term abortions, which have virtually no common side effects or risks (other than possible allergic reactions to drugs). In totality, getting an abortion is almost 15 times less likely to kill a woman than carrying the fetus to term and trying to give birth.

Meta-reviews by the National Cancer Institute and the American College of Obstetricians and Gynecologists have found no link between cancer and abortion. In fact, here is what ACOG said to summarize its findings on this correlation: “Early studies of the relationship between prior induced abortion and breast cancer risk were methodologically flawed. More rigorous recent studies demonstrate no causal relationship between induced abortion and a subsequent increase in breast cancer risk.”

While some studies have shown that late-term abortions can correlate with infertility or future reproductive health consequences (often because there is a problem with the fetus that damages the mother’s reproductive system and necessitates an abortion), this risk is dramatically decreased in the second trimester and essentially non-existent in the first. This means that a vast majority of abortion procedures have no effect on future fertility, and the ones that might are either medically necessary or due to the obstructions put in place to prevent abortion access (ex. waiting periods delaying the procedure to a later stage of fetal development).

From a mental health perspective, abortions are extremely unlikely to have any negative consequences.

A recent study has found that 95% of women who get abortions feel that it was the right decision, including 89% of those who claim to have some regrets about their choice. This same study found that women who were denied abortions were actually significantly more likely to express regrets or reductions in happiness than those who obtained the procedure.

According to the Americans Psychological Association’s Mental Health and Abortion Task Force Report, most of the studies that have shown a relationship between abortion and mental illness suffer from severe methodological flaws, and the general consensus of the experts is that there is no increased risk of mental health problems after an abortion. At best, those who propose this correlation have shown that women who are diagnosed with mental problems are more likely to have unplanned pregnancies, thus access abortion services—this is not causal, and conflating this finding to obscure the real views of the experts is intellectually dishonest. 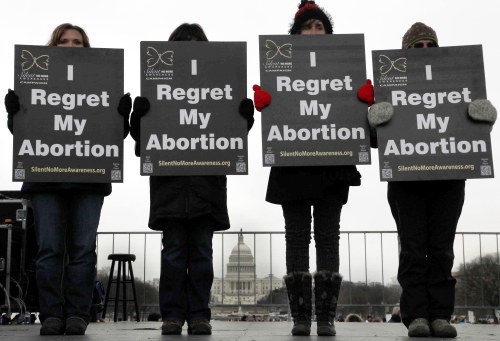 Read: “I was able to get an abortion when I needed one, but I will now claim the authority to prevent you from accessing that same right now that I no longer feel that I need it.”

As a final note; you may hear pro-life advocates and groups throw around the medical-sounding diagnosis of “post-abortion syndrome” (AKA “Post Abortion Stress Syndrome” or PASS) to describe depression, anxiety, and a bunch of other mental problems that supposedly come after an abortion. This “diagnosis” is not recognized by any legitimate psychiatric association and is simply designed to sound scholarly/official while having no real clinical value. It is, at best, a description of the mindset for the tiny minority of women who get abortions and then, often due to religious conversions, decide that abortion is evil and are struck with guilt and shame.

These women sometimes become some of the most extreme anti-abortion activists who trumpet their experiences as demonstrative of the damage that abortion can cause (and not the damage that religiously-based shame can do). In many ways, these women are similar to the gay individuals who are entrapped in the “ex-gay movement” and who describe the terrible shame, fear, depression, and anxiety that homosexuality causes, without realizing that these emotions are due to societal institutions (churches) demonizing otherwise neutral situations (homosexuality).

Numerous studies have shown that banning abortion doesn’t reduce the demand for abortions and simply leads to women using unsafe and illegal means to end their pregnancies—women still seek abortions at the same rate, but are far less safe than if the procedure were legal and performed by a medical professional. When legal abortions aren’t available, poor women tend to utilize illicit drugs, illegal clinics and even beatings or wire hangers to self-abort, putting themselves in immense danger; on the other end of the income spectrum, rich women tend to travel out of country to avail themselves of abortion services in countries with far more liberal abortion policies.

Global studies by the World Health Organization confirm these findings and conclude that banning abortion has NEVER been effective in reducing abortion rates, regardless of the society that tries to eliminate a woman’s choice (ex. abortion bans are just as ineffective in Africa as they are in Asia or the Americas).

The vast majority of the pro-life movement’s policy suggestions—banning abortion, mandating needless ultrasound or counseling sessions at religious clinics, promoting abstinence, and restricting contraception—do not reduce the rates of abortion. They may make it harder, more dangerous and more painful for women to access abortion, but those women still find ways to end their pregnancies. In many ways, the pro-life movement’s rhetoric on this issue is intended to make them feel self-righteous and not to actually reduce the number of abortions in our nation.

If we really want to minimize the number of abortions in our nation, we know how to do it. The best way to reduce the number of abortions is to make the procedure cheap, legal and accessible, but to establish strong sex education, contraception, childcare, and social safety net programs that make it easier for women to raise their children. By removing the problems that lead women to consider abortions (ex. a lack of maternity leave at their job or resources to raise another child), we can attack abortion at its root causes without ever infringing upon the rights of women.

According to a recent study by the peer-reviewed medical journal Obstetrics and Gynecology, free and universal contraception can cut abortion rates by as much as 50%. This policy change, even if it were implemented alone, would have an incredible effect on US abortion rates and would actually have a negative cost to insurers/social welfare programs, as paying for birth control is far less expensive than paying for a pregnancy.

Whenever you are confronted with an anti-choice individual who makes the argument that abortion bans are the only effective way to protect life, you should challenge them using these sources and ask them to state their position on contraception, universal healthcare, sex education and a strong safety net. You should point out the research that proves that these policies are all far more effective than simply banning abortion services and that your support for these programs makes you the truly “pro-life” person—after all, your policies minimize the number of abortions performed and would be far more effective than draconian bans.

Turn the debate into one of relative policy effectiveness, where you force the anti-choice individual to start justifying their objections to policies that actually have been proven to reduce abortions and support for ineffective and anti-freedom policies. You can claim the high-ground on both maximizing personal freedom for women and reducing the number of women who get abortions, leaving almost nowhere for the anti-choice individual to turn.

If the pro-life individual is a “conservative” who says that the types of taxation that would be necessary to pay for those social welfare programs is a violation of his liberty, then you can also attack their hypocrisy. They are willing to infringe upon the rights of a woman if it would “protect life” but are unwilling to have their liberty even slightly reduced in service to the same ends. This proves that they care less for preserving “life” than they do for keeping their taxes low and exposes them as a person who just wants to control women while using “pro-life” rhetoric as an excuse.