The 2016 Fox GOP Debate: Extremism and Ignorance on Parade

Yesterday, the Republican presidential field convened to showcase its ideas and battle for the support of the base (and, more importantly, donors). There were few surprises in this debate and this event did little other than to illustrate that the current GOP has completely divorced itself from objective reality. The GOP’s ideology has essentially imploded and turned into a nonsensical echo chamber, where Obama destroyed the economy, the only solution to illegal immigration is to create a giant wall, and social issues are the primary concerns of the American public.

The Fox debate contained just over an hour of content and, unlike in a traditional structured debate, candidates were given wildly different amounts of time to speak:

The GOP candidates were asked a variety of questions, primarily dealing with their histories, economic vision, and proposals for immigration and national security. Unfortunately, their answers rarely progressed past the standards platitudes and talking points (ex. build a giant wall to block illegal immigration), and there was almost no substance on display. In addition to spouting non-specific policy platitudes and explaining away their historical deviations from GOP orthodoxy (ex. Trump’s support for Clinton), the candidates had opportunities to throw red meat to the base by explaining how anti-abortion they are (Huckabee won that one by arguing that fetuses should be given 5th and 14th Amendment rights) and by bashing Obama and Clinton (who were mentioned 44 times).

According to polling of right wing voters by Drudge, Trump absolutely dominated the other candidates. Trump was considered the winner of the debate by 38% of those polled, with Cruz coming in second at 15.5%. Carson, Rubio, and Paul received between 9 and 10% support, while no other candidate broke 5% (Christie finished dead last, with an embarrassing 1.4% of the voters saying he won the debate).

Ironically, Trump’s success in the debate came in spite of the fact that the moderators were clearly trying to scuttle his candidacy. From the outset, the moderators asked a series of leading question of Trump, such as asking him to justify a series of anti-woman comments he has been caught making, singling him out as the only candidate who won’t bow to the establishment and support the eventual nominee, and demanding that he explain why he once supported Clinton.

While the moderators’ questions were leading, they gave Trump ample opportunity to speak (ex. he was given more than double the talking-time than Paul) and allowed him to paint himself as the anti-establishment candidate who hates political correctness. These are favorable characteristics for the GOP base and, while they will almost certainly harm him within the party elite, they likely helped him with the base.

From a substantive perspective, the three best performers in this debate were Trump, Paul and Kasich. Each of these candidates had strong substantive policy moments that set them dramatically aside from the rest of the field.

Trump had an extremely substantive comment on campaign finance and actually made a very good point that most politicians know, but refuse to acknowledge in public:

Trump: I will tell you that our system is broken. I gave to many people, before this, before two months ago, I was a businessman. I give to everybody. When they call, I give. And do you know what? When I need something from them two years later, three years later, I call them, they are there for me.

Questioner: So what did you get?

Trump: And that’s a broken system.

Questioner: What did you get from Hillary Clinton and Nancy Pelosi?

Trump: “Well, I’ll tell you what, with Hillary Clinton, I said be at my wedding and she came to my wedding. You know why? She didn’t have a choice because I gave.”

In this short exchange, Trump points out the problem with money in politics and, surprisingly, admits that the system is broken. Our politicians do not just take donations and walk away—they become dependent upon donors and must service their interests. In some cases, this means that they reduce those donors’ taxes, while, in others, it could result in them deregulating entire industries. This is particularly extreme within the right wing, and the GOP as a whole has spent the last several decades essentially living in the pockets of big money.

When asked about his decision to expand Medicare under ObamaCare, Kasich had an extremely good response:

Kasich: — first of all, Megyn, you should know that — that President Reagan expanded Medicaid three or four times. Secondly, I had an opportunity to bring resources back to Ohio to do what? To treat the mentally ill. Ten thousand of them sit in our prisons. It costs $22,500 a year…

Kasich: — to keep them in prison. I’d rather get them their medication so they could lead a decent life. Secondly, we are rehabbing the drug-addicted. Eighty percent of the people in our prisons have addictions or problems. We now treat them in the prisons, release them in the community and the recidivism rate is 10 percent and everybody across this country knows that the tsunami of drugs is — is threatening their very families. So we’re treating them and getting them on their feet. And, finally, the working poor, instead of them having come into the emergency rooms where it costs more, where they’re sicker and we end up paying, we brought a program in here to make sure that people could get on their feet.

This argument by Kasich was one of the few substantive policy points made in the debate and he is entirely correct. It is far cheaper to provide mental health and addiction care to individuals using social welfare programs than to wait until their lives spiral out of control and they are incarcerated. While expanding Medicare does cost a lot of money (most of which the feds will reimburse the state for), it saves more money in the long term by reducing incarceration and catastrophic care costs. In fact, this argument is a perfect argument for a national single-payer or nationalized health care program—such programs would establish universal coverage and would be the most efficient ways of reducing high-cost catastrophic health costs.

Paul and Christie had a very long, and telling, exchange on civil rights and privacy. This exchange made up a bulk of both candidates’ talking time and involved Paul putting on a fairly robust defense of the Constitution against Christie’s fearmongering. Christie came out in support of big-intelligence collecting bulk data on Americans in hope that it could help prevent terrorist attacks, while Paul pointed out that such programs are clearly illegal. 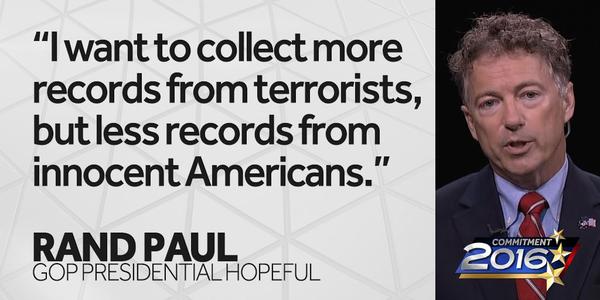 Here is a short cut-out from this long exchange:

Christie: And — and, Megyn? Megyn, that’s a — that, you know, that’s a completely ridiculous answer. “I want to collect more records from terrorists, but less records from other people.” How are you supposed to know, Megyn?

Paul: Use the Fourth Amendment!

Christie: What are you supposed to…

Paul: Use the Fourth Amendment!

Christie: …how are you supposed to — no, I’ll tell you how you, look…

Paul: Get a warrant!

Paul is entirely correct, and Christie doesn’t even try to justify how the programs are legal under the Constitution. Christie’s whole argument amounts to “9/11, be afraid!!!” and is devoid of any real substance.

While Trump, Kasich and Paul made a few good points during this debate, those nuggets of truth were eclipsed by the mass of ignorance and extremism spewed out onto the stage. At the end of the day, the winners of the first GOP primary debate were Hillary Clinton and Bernie Sanders, as the positions taken by these candidates are almost certainly going to come back and bite them in the general election.

5 thoughts on “The 2016 Fox GOP Debate: Extremism and Ignorance on Parade”