Yesterday, House Republicans called Cecile Richards—the current president of Planned Parenthood—to testify in front of the House Oversight and Government Reform Committee about the actions of her organization. This five hour farce was little more than a kangaroo court, where borderline incoherent right wing zealots could ask absurd questions and grandstand for their base. 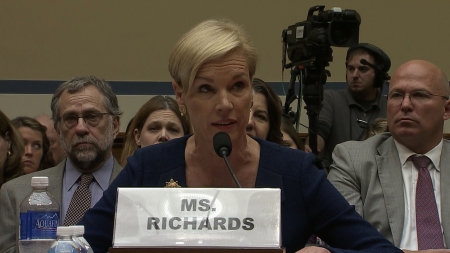 The questions of Richards covered a wide range of topics, including the fetal tissue donation program, PPFA’s corporate holdings overseas, the alleged transference of federal money for family planning into abortion services, executive compensation at PPFA, and the capacity of other organizations to perform the functions that PPFA currently provides.

Honestly, I didn’t have the time or patience to watch all five hours of this “hearing.” It was excruciating and repetitive, with committee Republicans asking leading question of Richards, waiting for her to get halfway through her answer, and interrupting her with accusations or fact-free responses to her partial point. When they weren’t questioning Richards, the GOP committee members gave anti-abortion monologues that held little-to-no substance.

While some of the Democrats on the committee made efforts to protect Richards and point out the unfair nature of the hearing, there was only so much they could do.

This entire situation illustrated the dominance of ideological rhetoric over factual reality in the minds of the current right wing. They presented absolutely no evidence to support their assertions, leading me to conclude that this wasn’t actually an attempt to investigate or even make a substantive attempt to defund Planned Parenthood—it was a joint campaign event designed to allow conservatives to get their opinions on the record and create footage for future advertisements

Even when the Republicans made a cursory attempt to provide fact-ish backing to their rhetoric, they failed utterly. The following graph was presented by Chaffetz to represent Planned Parenthood’s spending on Abortions vs “Cancer Screenings & Preventative Services.”

Hint: if you are making a fake graph like this, don’t make it linear, as that isn’t how these things work.

Chaffetz claimed that this graph came from Planned Parenthood’s own reporting and shows a massive redistribution of resources from family planning to abortion services. Richards was remarkably prepared for this graph however, and completely took Chaffetz aback (watch the video) when she not only denied this graph’s validity, but also pointed out its real source as the anti-abortion group Americans United for Life. 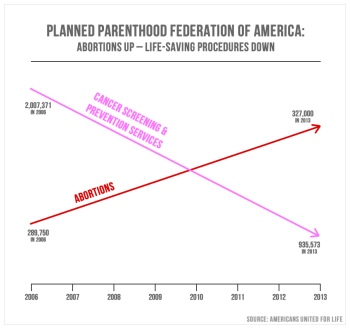 …and here is what the graph looked like before Chaffetz removed the “source” box from the lower-right-hand corner.

It is very important that everybody who watches this “hearing” and who cares about this issue to know four basic, yet commonly ignored, facts: 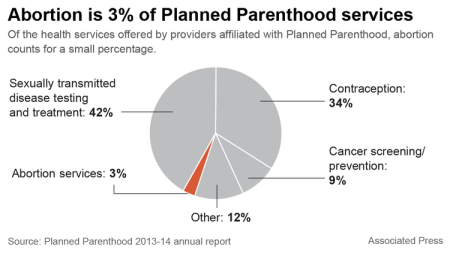 These facts illustrate how absurd the Republican attacks on PPFA are. If they truly cared about reducing abortions, rather than simply gaining the support or religious extremists, they would give far more money to PPFA in order to make contraception even more accessible. This policy would be the most “pro-life” thing that they could do, yet they have chosen to spend their time grandstanding instead of making a substantive policy difference.

To conclude this rant, here is a video of Elizabeth Warren delivering an epic beating on the GOP for their attacks on PPFA (from last month, when they held the first hearing of this series).