During the 2016 Democratic primary, the two frontrunner candidates—Hillary Clinton and Bernie Sanders—have announced their support for education reforms that will make college more affordable to students. Both of these plans would be drastically superior to the current status quo, but they contain critical differences that speak to their underlying political philosophies. These differences also create key disparities in the likely effectiveness of the programs and their chance of surviving into the long term.

Hillary Clinton supports increased grants to states aimed at reducing student tuition in public schools. She is not in favor of universal, socialized higher education, but rather a series of subsidies and aid reforms that make it possible for students to attend state schools without going into debt. It would still require students to pay a “reasonable” amount of money into their education and work a minimum of 10 hours a week in order to receive assistance. The total costs of this plan are estimated at $35 billion a year, which she would pay for through reducing high-income tax breaks.

Finally, Hillary would use grants to entice colleges to be more transparent, and to punish schools that do not provide a useable education (ex. withholding grants from schools that have high dropout rates or low job placement rates).

Bernie Sanders supports making public higher education absolutely tuition-free by levying a tax on financial speculation that would replace the tuition that students currently pay—it is revenue neutral. If a student cannot afford to attend school even after tuition is reduced to zero, Bernie supports mandating that public schools provide work-study opportunities and financial aid to needy students.

In effect, he supports making access to higher education a right and public responsibility to provide, just as the primary public education system is today. These reforms have been extremely effective in many European nations (ex. Sweden) and there is no reason to believe that they would be less effective in the USA.

Under Bernie’s college plan, all federally-backed student loans would be revenue-neutral and have interest rates that are just high enough to ensure the subsistence of the program. This would make loans to students attending private schools far less expensive. According to his proposal, new undergraduate loans would have their base interest rates reduced from 4.29% to 2.37% overnight, saving students billions of dollars a year (ex. in 2013, the Feds made over $41 billion from student loan interest). 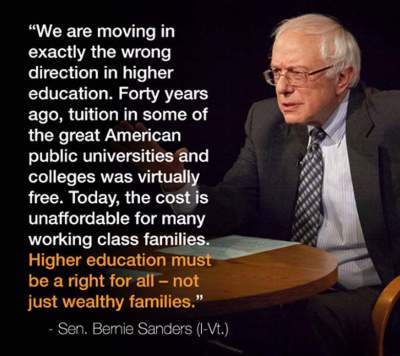 Comparing these plans illustrates several key differences in the ideologies of Bernie and Hillary.

First, Bernie considers access to higher education a right, while Hillary sees it as a private asset that should be subsidized by the state. This is a key difference because, if education is a right, the priority is on ensuring that everybody has access to it, while, if it is simply a social positive that is worthy of a subsidy, there is no compelling mandate to ensure equal access (as long as “enough” people receive aid).

Second, while both plans would improve college affordability, Bernie’s plan gives uniform benefits to beneficiaries, while Hillary’s plan will benefit the rich and the poor significantly more than the middle class. This is simply a function of the Hillary plan including a requirement that families contribute a “reasonable” amount of money towards public school tuition—rich families don’t need this aid and low-income families are so poor that they are unlikely to be asked to pay, thus the middle class would likely be the primary target of these requirements.

Third, the Hillary plan reduces its costs by not offering free educations to the children of wealthy families at public schools, but it pays for these savings with a reduction in her plan’s long-term stability. It is significantly harder for politicians to cut universal entitlement programs than it is for them to cut “welfare” programs that only benefit the most vulnerable Americans (ex. cutting Medicaid benefits is far less likely to have political consequences than cutting Medicare benefits). By adding a means-testing component to her plan, Hillary is turning it into a “welfare” program, as opposed to Bernie’s entitlement model.

At the end of the day, I think that the clear preponderance of the evidence shows that Bernie’s plan is marginally superior to Hillary’s, both in terms of equality and long-term survivability. That said, Hillary is proposing a perfectly valid, and likely very effective, package of reforms than any progressive should get behind if she wins the 2016 election. It goes without saying, both of these plans are dramatically superior to anything proposed by the GOP on this issue.