The Modern GOP: Ignorant, Extreme, and Proud of It

In psychology, there is a very interesting cognitive bias called the Dunning–Kruger effect (aka. “illusory superiority”). People suffering from this bias are so ignorant or unintelligent that they cannot rationally assess their own competence, thus end up thinking that they are significantly more competent than they are in reality. This bias breeds arrogant ignorance, where uninformed or unskilled people believe themselves to be extremely competent, if not more competent than people who actually have experience in the relevant field.

The Dunning-Kruger bias also effects the highly-competent and informed, leading some competent individuals to underestimate their own knowledge. People who recognize the complexity of issues and understand that their knowledge likely only scratches the surface routinely rate themselves as less competent than they are.

In totality, the Dunning-Kruger bias creates a situation where loud and arrogant ignoramuses assert that they know the answer to everything (while really proposing nonsense), while intelligent people try to make nuanced and humble (not asserting immediate and perfect solutions to complex problem) arguments for their policies.

If this dichotomy sounds familiar to anybody, this is because it is perfectly represented in the current American political landscape. The right wing has fallen completely under the thrall of the Dunning-Kruger effect’s arrogant know-nothingism while liberals have tried to remain somewhat more balanced.

In the past, both parties had significant anti-intellectual and ignorant populations, but party leadership kept this under control by ensuring that the actual policies that were under consideration were largely based in reality. The politicians who most exemplified the Dunning-Kruger effect (ex. the John Birch Society) were marginalized and not allowed to control the party line.

Today, the Democrats have largely retained this status quo, but the Republican establishment has been wholly consumed by the know-nothing extremists who were previously kept to the margins. With these extremists controlling their narrative, the GOP has spiraled into a world of pure rhetoric that is completely detached from objective reality. In the eyes of this know-nothing GOP, every problem can be solved through very simple solutions that just happen to line up exactly with their long-held beliefs and the interests of their donors—there is no room for complexity, nuance, or a diverse portfolio of solutions. Contrasting the GOP and Democratic debates gives us numerous examples of this, and even a casual viewer can see that the GOP is far more willing to accept simplistic and unrealistic policy “solutions” to complex issues than the Democrats. 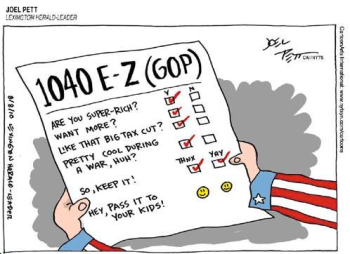 For example, the GOP candidates are proposing tax plans that they claim will account for the complexity of the economy in impossibly simplistic ways (the most extreme examples of this are Fiorina, who wants the tax code to be limited to 3 pages long, and Cruz, who thinks that tax forms should fit on the back of a postcard). Additionally, every expert analysis of these plans indicates that they will be massively regressive or impossible to implement, yet the GOP simply refuses to address these concerns on any substantive level (they simply disagree with the experts without providing any supporting evidence for their argument). Conversely, the Democratic candidates have much more nuanced discussions about shifting marginal tax rates to raise revenue in the most efficient manner. They are willing to discuss these details on a much deeper level than the GOP and have not simply rejected expert criticisms without evidence. 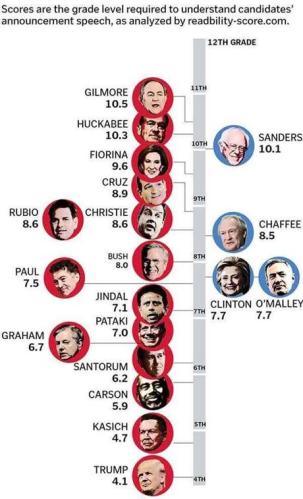 Unfortunately, the American public has a shocking lack of policy knowledge and it is human nature to correlate assertiveness with competence—in effect, a leader who is very assertive, yet completely wrong, is more likely to be successful in getting support than a leader who is much more measured, yet holds factual policies. Many Americans listen to the GOP’s simple and easy to understand rhetoric, which is delivered with absolute certainty, and support them without ever realizing that they are being led down the rabbit hole to hang out with the political equivalent to the mad hatter.

23 thoughts on “The Modern GOP: Ignorant, Extreme, and Proud of It”