During the 20th Century, the progressive left was the driving force behind the free speech movement. Progressive social justice activists like Mario Savio pushed civil rights, economic equity, the rejection of war and the protection of speech for decades, while conservatives and religious extremists sought to stem the tide of progress.

In many regards, this fight was incredibly successful and the United States saw dramatic increases in civil equity for African Americans, LGBT Americans, and women, as well as protections for free speech, both on campus and in society in general. Today, we are still fighting to promote more economic equity and less war, but have had relatively less success on these issues than the others.

Unfortunately, a large number of modern leftists, particularly younger leftists on college campuses, have begun to backslide on the issue of free speech and are now threatening to erase one of the most important victories progressives achieved in the last century. By promoting “safe spaces” (places where their opinions are sheltered from criticism, not referring to legitimate demands that people not instigate violence with speech) censorship based upon personal demographic, and the insulation of personal experience from factual criticism (ex. “invalidating somebody’s experience” by proving them factually wrong), this contingent within the left attempts to stop speech that it disagrees with and demonize those who deliver that message.

It is important to note that this is not a purely leftist issue, as the right has not learned the lessons of history and has consistently held a regressive view of speech—in effect, those on the left who hold anti-speech positions are simply adopting the conservative position on speech in order to insulate their “progressive” values from any debate (ex. calling anybody who disagree with their opinion on racial inequality a racist, regardless of the facts). 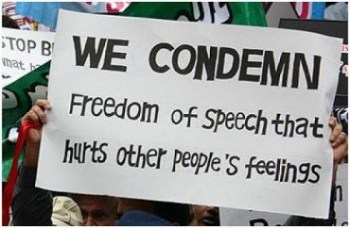 One recent example of this situation occurred at Yale, when a faculty Master had the temerity to send an email saying that Yale should not try to police student’ Halloween costumes. Erika Christakis’s email was by no means offensive and simply read:

“If you don’t like a costume someone is wearing, look away or tell them you are offended. Talk to each other. Free speech and the ability to tolerate offense are the hallmarks of a free society.”

This manifestly reasonable email led to a massive backlash which centered around whether the university was a “safe space,” where people should feel sheltered from offense, or a place where free speech lived, and offense was sometimes taken due to clashing opinions. Unfortunately, free speech lost this fight, and Christakis resigned after large protests. These protests illustrated the very worst of the anti-speech left, and you can watch this cringe-worthy video of one such event at this link.

I honestly think that this student protest perfectly summarized the central ethos of the anti-speech left: they don’t want to exist in an “intellectual space” where they have to debate their beliefs. They are hyper-sensitized to offense and perceived aggression, but are perfectly willing to shout down or scream at others and are incapable of understanding that people who disagree with them have the right to speak as well. This example is made even more galling by the fact that these are some of the most privileged students in the nation (ex. the female protester in this video comes from a millionaire family, lives in a $760,000 home in CT and is attending Yale).

Those on the left who oppose free speech out of a desire to insulate ideas or groups from criticism or offense have no idea how dangerous their tactic is. They forget the simple fact that the progressive position is not the establishment default (quite the opposite in most cases) and that speech codes can easily be used to crush progressive action. Their intentions may be good (ex. to defend disadvantaged minorities), but their results are truly toxic to progressive causes.

For example, at the start of the civil rights movement, it was considered deeply “offensive” to argue that all races are equal and there was a very real worry that pictures of interracial couples could “trigger” sensitive whites. By the logic of these anti-speech leftists, those in the establishment would have every right to repress those who publicly championed these “offensive” causes and prevent them from speaking up on campus. At the time, conservatives on campus did try to push such censorship, but progressives pushed past this and achieved change.

In short, this situation rapidly becomes untenable and, either the establishment gains the ability to repress those who have an anti-establishment position (one side gains the right to censor while the other is given 2nd class status), or both sides gain the ability to mutually censor one another, barring discussion of vital issues on campus (both sides censor one-another).

If we, as progressives, don’t protect an absolutist protection of free speech, we open the door to censorship that can be used to destroy our campaigns for equity. The second we decide to support censorship in one area of speech (ex. the right for people to say racist and culturally offensive things), we lose the moral high ground to criticize forms of censorship that are directed at us. Progressives in the past understood this and made concrete efforts to avoid such a toxic precedent. For example, in 1978, the ACLU represented neo-Nazis in their court case (National Socialist Party v. Skokie Illinois) to get the right to peacefully march through a Jewish neighborhood in the town to Skokie. The ACLU used the exact same legal precedents in this case that they used to defend the right of civil rights protesters to stage their own marches, and they were 100% correct to do so. 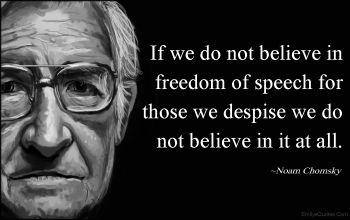 The proper avenue to fight against offensive speech is to use your free speech to fight back, not to use censorship to crush debate. If you truly believe in your progressive positions, you must be prepared to defend them rather than rely on censorship to stifle debate. I, for one, am perfectly happy to meet in the arena of ideas and argue against those who disagree with me. I don’t demand a “safe space” and to be sheltered from offensive opinions, nor do I claim the power to repress those who say stupid, inane, offensive, ignorant, or bigoted (basically, the Donald Trump combo platter) things.